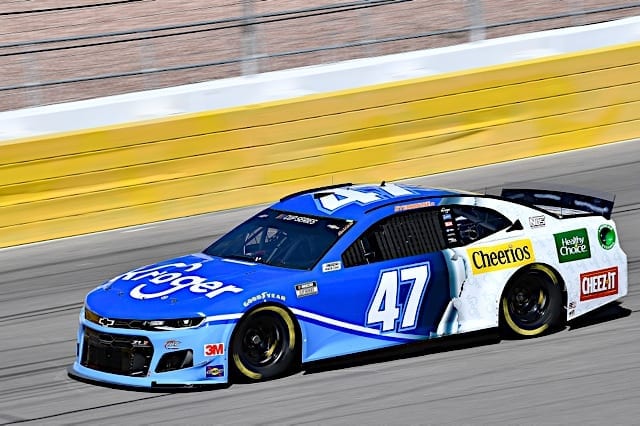 What kind of calls will Brian Pattie make this week?

One of the more interesting things to take away from Sunday’s NASCAR Cup Series race at Las Vegas Motor Speedway was just how risky the No. 47 team is willing to be.
Crew chief Brian Pattie is well aware that JTG Daugherty Racing doesn’t have the equipment to viably compete for wins every week. So instead of just hoping for driver Ricky Stenhouse Jr. to walk away with a solid top-20 finish after not doing much, Pattie called a very aggressive race strategy from atop the pit box.
Every time the field went through a green flag pit cycle, Stenhouse stayed out as long as he could. The team hit the jackpot on the final green flag pit stop, restarting in the lead and then hanging on in the top 10. When the caution came out again with six laps to go, Pattie continued to be aggressive and stayed out. The gamble paid off when cars behind the leaders wrecked coming to get the white flag, ending the race just a lap after the final restart and giving Stenhouse a third-place result in just his second Cup race with JTG.
With the forecast for Auto Club Speedway this weekend looking like the race may be in danger of ending after halfway, it wouldn’t be surprising at all to see a big win for a small team if the rain does come.

Should NASCAR put more scrutiny in their approval process?

In a week of strange NASCAR Twitter developments, one of the most notable occurred on Tuesday night.

Although most of the talk on social media has been this reply from Angela Ruch, which was later attributed to her husband Mike because of course it was, Parker Kligerman’s point remains valid. NASCAR should be much more active in ensuring that only viable, competent race car drivers are approved to race in NASCAR’s three national touring series. What benefit to the sport at large is there for Ruch to finish five laps down in incident-free races? At 36, is she going to get any better than she is right now?

Not only that, but qualifying in the Gander RV & Outdoors Truck Series really needs to change. As it stands, the fastest 27 trucks make the field, the next four positions are determined by owner points and the final spot in the field is determined by either the most recent past champion missing the race or the fifth-highest truck in owners points missing the show.

The champion’s provisional is an outdated relic that was only put in the place in the first place because Richard Petty retired five years too late, and there’s such a huge discrepancy in truck speeds that having so many owner-point provisionals in this series is ridiculous. It leads to a situation like this past weekend, when Bayley Currey and Korbin Forrister outqualified all five trucks that made the field on provisional but had to go home because of not having enough points.

There should be only one truck provisional, and it should only be reserved for the current points leader if they fail to qualify for the race. No reason to send faster trucks home like that.

The bounty. Who’s going to challenge for it?

By this point, you might very well be sick of hearing about Kevin Harvick’s now-infamous $50,000 bounty, which was later extended to $100,000 after Gander Outdoors CEO Marcus Lemonis doubled it. But hey, it’s still a story.

I’m disappointed he didn’t just randomly put “KABUKI” in the middle of his tweet.

The Truck Series really didn’t seem like it had much going for it in March. Kyle Busch is eligible for and will be racing in all three races and is probably going to run away with them. Now, with a bounty, everything is going to get a little interesting, and it wouldn’t shock me at all to see some fairly big Cup names come down to run Trucks.

If there’s anybody who can beat Busch in March, it would be Kyle Larson in the GMS Racing No. 24 Chevrolet at Homestead-Miami Speedway. Larson is amazing at Homestead, and it would be awesome to see what he has against Busch when both are in really good equipment at a track that Busch doesn’t have much track time at in a truck.

And of course, right as this column was about to be submitted, we had our first and second bounty hunters show up. And trust me, I wrote the above paragraph prior to either announcement.

Count me in for @HomesteadMiami! Thanks for the opportunity to make some cash money @GMSRacingLLC and @TeamChevy.

And what else can I really write about the Larson announcement? These were two announcements I don’t think Busch wanted to see, and while the Atlanta one was higher profile, Homestead is going to probably be his biggest challenge this month.

Who will take control at Auto Club?

Busch absolutely dominated last year’s race at Auto Club, winning all three stages and leading 134 of 200 laps. This year may very well be more of the same.

At this point, Busch is going to need to start getting out of a points hole into which he’s dug himself. The defending champion is 27th in points and is going to need some good results if he wants to contend for the regular season championship.

Brad Keselowski always seems to find a way to finish well at Auto Club recently. The 2015 race winner has an average finish of third in the past three editions of this race and will be a definite factor as the race begins to wind down.

Meanwhile, Hendrick Motorsports seems to have finally taken a step forward this season with how well it did last week. Keep an eye on Jimmie Johnson. Johnson may compete for the final time at his home track,the track he scored his very first Cup win at in 2002. The seven-time champion hasn’t won since 2017, but that doesn’t mean he doesn’t still have some guts; his ballsy late-race pass on the apron for fifth last week showed that he’s not content with just riding around.

Kevin Harvick has done better a better marketing job for the truck series than Nascar since Mike Skinner drove a look-alike black Goodwrench 3. I hope the ratings differences are duly noted.