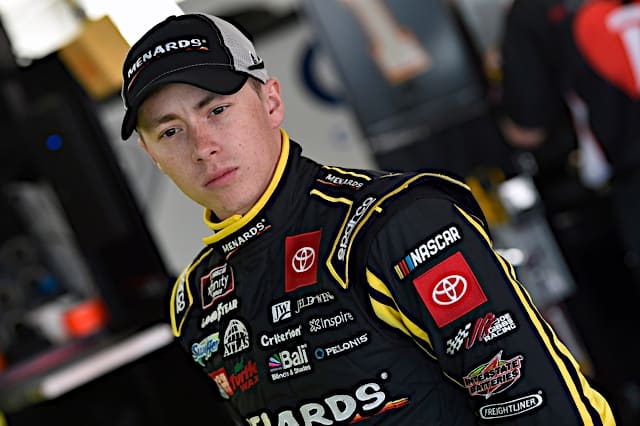 At this time two years ago, Brandon Jones was trying to find his footing at Joe Gibbs Racing. Now, two races into the 2020 NASCAR Xfinity Series season, he’s becoming one of the team’s leaders.

Jones, 23, is in the midst of his fifth full-time season in Xfinity. His first two years were spent with Richard Childress Racing, prior to moving to JGR for the 2018 season. Since joining the Toyota camp, the Georgia native picked up his first win (Kansas Speedway, last year) and the two seasons in which he recorded his most top-10 finishes.

But Jones’ time with JGR hasn’t been all sunshine and rainbows. The No. 19 car had eight DNFs in 2019, the most among drivers that made the playoffs and that led to some frustration, though the speed showed at times.

“It started off extremely strong, it was awesome,” Jones recently told Frontstretch of his 2019 season. “It just kind of hit that luck path: tires, motors, you can’t do anything about that kind of stuff. Once we got towards the end of the year, got the win and got back on track, [and] that’s exactly what we needed to transition into this year.”

While Jones struggled to put full races together over the past two years, his then-teammate Christopher Bell dominated, winning 15 of 66 races (22.7%). In that same time span, the No. 19 team had eight top-five finishes total.

Admittedly, Jones learned every single race, and not every driver learns at the same rate. At times, that led to some pent-up frustration inside the No. 19 camp.

But JGR signed Jeff Meendering — who was coming off a Championship 4 appearance with Cole Custer in 2018 — to lead the way for Jones for the 2019 season. As the 2020 season has recently gotten underway, it’s the first time Jones has had the same crew chief in consecutive seasons during his Xfinity career.

“I truly believe it takes almost a year to really get comfortable with each other and figure out what you’re saying,” Jones added. “The consistency for this year is going to be great having the same crew chief, pretty much the same backbone of the team because we didn’t change much. I think all of that is really going to help.”

In the process, JGR has called up fresh, babyface drivers, Harrison Burton and Riley Herbst to its Xfinity stable for this season.

Burton, 19, made the move up from running full-time in the Gander RV & Outdoors Truck Series last year with Kyle Busch Motorsports. Though he never got to victory lane, there was seemingly a steady improvement throughout the campaign.

Herbst, on the other hand, is making a big jump from competing part-time in the ARCA Menards Series last season (where he ran 47 of 60 races for JGR between 2017 and 2019) as well as nine Xfinity races with his best outing of ninth. In addition, he made a trio of Truck starts with KBM last year.

Because Jones is entering his third year in the JGR Xfinity system, he plans on being a helping hand for the younger drivers, who are making the transition this year to a longer schedule and harder competition.

“I definitely know the tracks now, I definitely know how most of the drivers race in the series and who to be careful around, who to race hard around and all that stuff,” Jones said with a laugh. “It all comes with time and experience, so maybe I can help them out a little bit there. They’ve proven themselves in different cars in different series and I think they’re going to run pretty well [in Xfinity].

Growing up, Jones played a multitude of sports where his leadership skills were involved, including basketball, golf and tennis.

At the age of 13, Jones began to race, something he believed he could excel.

While developing leadership skills isn’t something someone can acquire overnight, Jones says he was both a leader and a follower growing up. But on the racing side, he believes he’s been a little too reserved in the past, something that will change this year.

“I hate to come into a new organization and start running your mouth and acting like you’re the big guy,” Jones stated. “I think this year [I] have to step up. You’re the guy that everyone is going to come to for questions, so that’s probably going to change a little bit.

“I want to make sure everyone is on their game and they stay on top of their game. … I’m going to be on them pretty hard about some things and if I see some things I’m definitely going to let them know.”

Even prior to the season beginning two weeks ago at Daytona International Speedway, Jones had watched film with Burton of prior races. The Toyota Racing Development simulator has also seen a lot of use in its Salisbury, N.C. headquarters between the trio of JGR drivers.

While Jones has become a better communicator over the years, off the track he’s advanced his body, too. While weight training every day of the week over the offseason, Jones gained seven pounds of muscle mass, now sitting at a lean 152 pounds. According to Jones, Burton is more of the cardio type of guy, though TRD has a weight training center at its headquarters.

For Jones, the hard work of bulking up is directly correlated to racing.

“I’m trying to step everything up,” Jones said. “I’m trying to put everything into this year. I realize this needs to be the breakout year. We need to have wins, top fives, so all that stuff together combined is what you’re probably going to see from me this year.”

Through two races this season, the No. 19 team has an average finish of fifth, placing best at Daytona in fourth.

How did this epic underperforming driver ever get and keep this Joe Gibbs ride?
Is he from a rich family? ???

You betcha! No other reason he would be there, along with most of them.