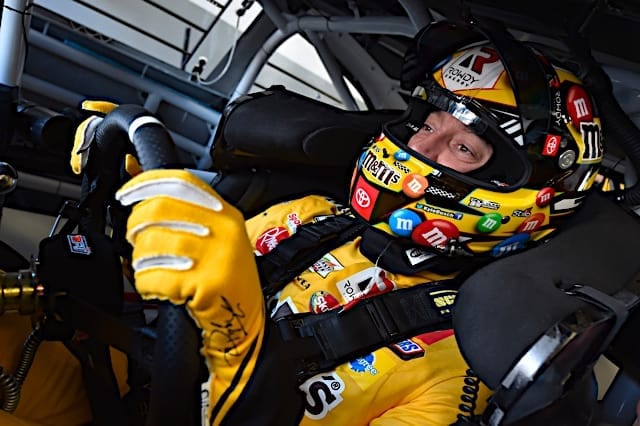 Richmond Raceway and NASCAR have got to be kicking themselves.

Much has already said about this challenge and the rules have already been explained. But essentially what it means is that if a full-time Cup driver competes in one of the Truck races Busch is in and beats the driver with the all-time most wins in the series, then they will be awarded a $100,000 bonus.

Harvick’s idea is a great one. Unless some Cup talent enters the playing field, Busch is just going to dominate his remaining 2020 Truck races as he has for his previous seven. If a Cup driver tries to take on Busch each time, then Harvick could potentially save us from four more boring Rowdy routings.

Two challengers have already entered the arena and accepted Harvick’s challenge: Chase Elliott will take on Busch in the Truck race at his home track Atlanta Motor Speedway and Kyle Larson will go for the $100,000 at Homestead-Miami Speedway (his supposed best track even though he doesn’t have a Cup win there). Both drivers’ trucks will be supplied by GMS Racing. There’s plenty of other drivers who have flirted with going for the bounty, but no others have been announced so far.

Part of the problem with this bounty is Busch’s remaining races are all at intermediate tracks: Atlanta, Homestead, Texas Motor Speedway and Kansas Speedway. In order to have any shot of beating Busch on an intermediate, a driver has to have a truck as good as Kyle Busch Motorsports’ equipment. No Cup driver can simply hop in a 20th-place truck and have anything for the two-time Cup champion. That’s why GMS is the only team fielding the bounty hunters so far.

This bounty would be so much better if it were being held at a short track. After all, local short tracks are where the idea of placing a bounty on a dominant driver was first developed. But more importantly, short tracks level the playing field, meaning a Cup driver could potentially compete for the win in equipment that is a far cry from KBM.

In the most recent Truck short track, Martinsville Speedway in fall 2019, Timmy Hill finished fifth driving for his own team. Danny Bohn and Codie Rohrbaugh were also in the top 10 in lesser equipment. No disrespect to any of those drivers — they’re all three talented — but imagine what a Cup-winning driver could do in those trucks at a short track. Plus, how awesome would it be to see Cup talent in those sort of rides — sort of like when Ryan Newman raced at Eldora Speedway for Jordan Anderson.

There just so happens to be a short track coming up on the Truck schedule that would’ve been the perfect stage for more than a few Cup drivers to face off against Busch: Richmond Raceway. The Truck Series returns to the three-quarters-of-a-mile short track on April 18 for the first time in 15 years. And what could have marked a better return to the track for the series than a star-studded bounty hunt on Busch.

Unfortunately, the Truck Series announced prior to the start of this season that Richmond would be part of the Triple Truck Challenge. No Cup drivers are allowed in the TTC, as it is meant to display the Truck Series regulars and earn them some extra cash.

Don’t get me wrong; it is a great program, and Cup drivers should not steal the spotlight in those races. But the Truck Series should have waited at least a year before making Richmond a part of the TTC. The fact that it is the first race at this track since 2005 was enough to give this event prestige. One of the tracks that have been on the schedule should have hosted a TTC race instead to help spice it up.

I consider this Richmond event to be a semi-inaugural event. After all, only two full-time Truck drivers have raced there before. I like the idea of drivers from multitudes of series competing in the first of any event. For example, the inaugural Truck race at Eldora was filled with Cup drivers, Truck drivers and dirt racers. The dream for this semi-inaugural race at Richmond would be for it to have drivers from Cup, Trucks and local short tracks (the latter is the biggest stretch).

Had this Richmond race allowed Cup drivers in it, then I have zero doubt that Busch would have entered. Prior to this year, Busch had won at every track on the Truck schedule that he had raced at. That is not the case anymore with Richmond now on the schedule — he’s zero for two there.

And if Cup drivers were allowed, there would also be a strong possibility one of the drivers who calls Richmond home would have challenged Busch.

So hear there’s a Truck race @RichmondRaceway coming up. KBs last race in this 4 race deal. @ToyotaRacing track,my hometown, might as well book this as a W.. If sponsorship is secured within a week I’m in. KB will go 4-1.

Despite being incorrect about Busch’s deal, Denny Hamlin is still trying to enter the bounty at one of the other races. But he will only do so if he is in a KBM Toyota, and I’m not so sure Busch signs off on that. But if one of the bounty races was at Richmond, Hamlin could probably get in a smaller team’s Toyota and still give Busch a run for Harvick’s money.

He’s not the most popular driver in NASCAR, but Hamlin does have a lot of fans in Richmond. His participation in the bounty would likely provide a slight boost in attendance for that race.

Also, Busch and Hamlin may be Joe Gibbs Racing teammates, but they have some unfinished business in the short track world after Hamlin held off Busch for the win in his last charity race.

“Smoked him”?? I shoulda moved u but let u win your charity race. It’s on next time! https://t.co/HYbXbCypt8

With that brooding rivalry among other drivers entering for the bounty, the Truck Series’ return to Richmond could have been a classic. Instead, it will be just another Truck race. Granted, that’s not a bad thing at all.

No coincidence that Busch chooses intermediate tracks to run….his equipment is far superior to most other teams on those tracks. That’s why I don’t even bother to watch Trucks of Xfinity when he is in the field.

right there with you sb – no trucks for me with KyBu in the field.

No matter how you spin it, more cup drivers in the truck or busch races is not a good thing. Just like SB said, lots of fans don’t even tune in. The truck races are usually the best out of the three, at least when the cup legends aren’t there to ruin it. This bounty is stupid, most fans do NOT want to see more cup drivers ruining the race.

DOES THE ” BOUNTY ” GET PAID FOR A CUP DRIVER WINNING THE RACE OR JUST FINISHING AHEAD OF KYLE ??