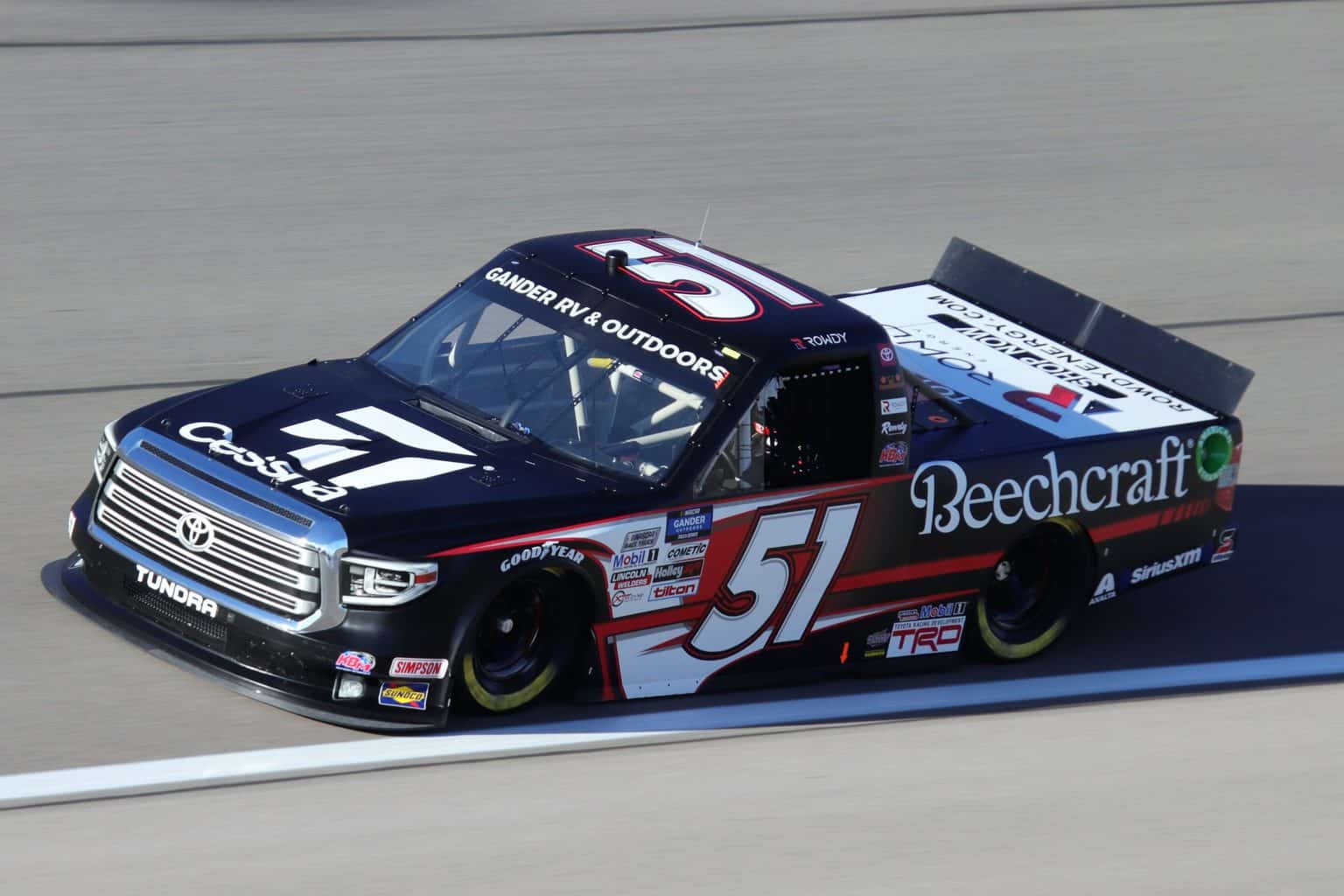 Kevin Harvick has thrown down the gauntlet.

In case you were hiding under a rock over the weekend, let me back up for a moment. Last Friday night, Kyle Busch went out and dominated the Gander RV & Outdoors Truck Series race at Las Vegas Motor Speedway and snagged his seventh straight Truck Series victory.

Fast forward to a comment from Christine Ward on Twitter, who said she essentially started watching the Truck Series because Busch raced in it and continued even when he doesn’t.

Enter Marcus Lemonis, who decided to sweeten the pot.

And if that wasn’t enough, Lemonis even offered up $250,000 if FOX would put the race in primetime. That’s highly unlikely given that the remaining races Busch is scheduled to run are around the same time FOX has WWE Smackdown Live on, but it’s still an intriguing offer just the same.

Of course, the Twitter firestorm took off with drivers putting themselves in the conversation and the addition of plenty of fans sharing their excitement at the possibilities. But of course, with something like this issue that really took off, there have to be rules as to how the money is earned.

Gotta be fair and square. First FULL TIME CUP driver to beat him. Can’t wreck him, and everything has to be fair as in any other race. Good friendly fun!!! https://t.co/SgO2MabpJK

Regardless of how you feel about Kyle Busch racing in the series, the bottom line is that we have Harvick to thank for the buzz that still surrounded the Truck Series entering Sunday. Sunday! That’s right. Here we had a race where a driver fans love to hate went out and led 108 of 134 laps in before stomping the field by a nearly six-second margin, and yet two days later, despite the looming two weekends off, a large chunk of the discussion in NASCAR as a whole is about the Truck Series.

I’ve watched and primarily covered the Truck Series for nearly 10 years, and when I first started watching, I was confused as to why I hadn’t found this gem before. Simply put, there was little-to-no incentive for me to do so. There weren’t any recognizable names for me to latch onto right away and there wasn’t much out there that covered the series in the first place. Had there been a name I could have paid closer attention to, it’s quite likely I would have found this shining part of NASCAR much sooner.

Sure, some of the spotlight may be initially taken away from the series regulars if any full-time Cup driver does make a run at the money, but at the same time, it will be an opportunity to bring eyes to the series that may not have considered watching before. And while the races are all on upcoming mile-and-a-half tracks, there are still plenty of reasons to pay attention.

And frankly, while there are plenty of people clamoring for the bonus to be available to Truck Series regulars as well, they’re missing the point.

Harvick was defending Busch’s presence in the series and trying to make the point that Kyle Busch Motorsports’ sponsorship was largely dependent on the Cup driver making those starts. Beyond that, he’s smart and understands that if this bounty provides an incentive for other Cup drivers to join the fold every now and then, it will certainly help in the long term for the series regulars. Because after all, more eyeballs mean more return on investment for a potential sponsor.

Even Johnny Sauter, who was asked about the bounty during Texas Motor Speedway’s media day on Wednesday, (Feb. 26) explained that he races hard for the win, regardless of what the payday is at the other side of the checkered flag.

The best part of it all? If Busch does what he usually does and beats the field to a pulp, the Samantha and Kyle Busch Bundle of Joy Fund gets the money from both Harvick and Lemonis.

For anyone who doesn’t know what it is, Bundle of Joy is “dedicated to advocating for infertility education and awareness and removing financial barriers by granting monetary awards to couples who require fertility treatments to have their own bundle of joy.”

Who can’t get behind a charity getting not only the exposure but also the donation?

Way to go Kevin and Marcus, As for Austin Dillon? No threat there.

If Kevin wants to take this to the next level, he should open a “go fund me” account where fans can join in too. Knowing the donations will go to a charity (either Kyle’s, or one chosen by whichever driver knocks him off the throne) could generate more interest and more $ for both the races and charities involved.