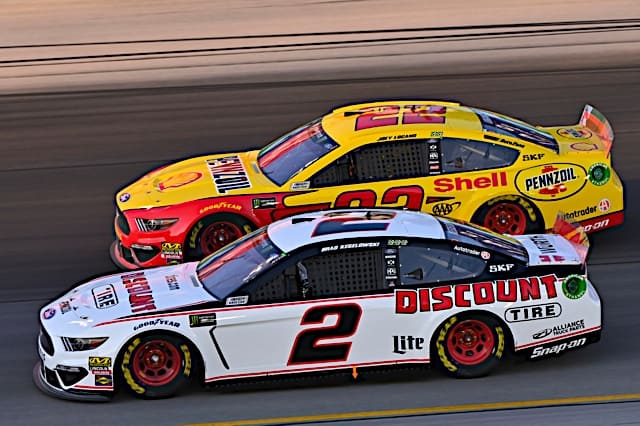 The bright stars of Hollywood will out in full force this weekend, with NASCAR’s annual visit to the area’s two-mile oval in nearby Fontana, the Auto Club Speedway.

This racetrack has the third oldest pavement on the circuit, only coming behind Dover International Speedway and the site of next week’s race, the Atlanta Motor Speedway. This track is old, grinds tires, and features some of the most exciting restarts in all of racing. Five-or-six wide isn’t an anomaly, it’s the norm on restarts.

Last week’s race at Las Vegas gave us one key indicator for the season: stay away from the Toyota drivers. Only one Toyota driver was able to finish in the top 15, and the only one that showed any signs of life on the day was Martin Truex Jr. Meanwhile, the Chevrolet drivers seem to be able to go blow-to-blow with Team Penske, while Stewart Haas Racing seems to still be a step behind the Penske bunch outside of Kevin Harvick.

Also, with only 0.1 points awarded for each lap led by a driver, the need for a dominator is less important when building a winning lineup. The 200-lap race will have a total of 20 points up for grabs in this category. Take note when building your roster and focus on mid-pack competitors who can climb up toward the front on race day.

Probably the most interesting stat I found out while researching this article: Joey Logano has not won at Fontana. He’s had some great results over the year, including just one finish out of the top five since 2015, but he just hasn’t been able to put it all together just yet.

Having just won a race, Logano is now virtually guaranteed a playoff berth at the end of the regular season. And that changes a lot of things as a driver. Now, Logano and crew chief Paul Wolfe are going to be able to make a lot of risky calls over these next 24 races, and with rain in the forecast on Sunday, why wouldn’t they roll the dice a a little bit more and hope for some rain?

I’m going to make a very bold prediction: if Brad Keselowski does not have a good day on Sunday, he is going to be the definite third banana at Team Penske this season. Fontana is a good racetrack for Keselowski, but he himself has been a tick behind his two teammates. That’s a huge morale blow, and while there’s a chance he and Jeremy Bullins are just ironing out their chemistry, they’re not guaranteed to ever find it over the course of this season.

The 2012’s champion lone win at Fontana came in 2015. Keselowski has had some decent runs at Fontana over the years, and could very well bring it home in the top five come Sunday.

The fastest on Friday was Alex Bowman, leading the charts in both practice sessions. This was after the race at Las Vegas last week looked like it was going to come down to a battle between Ryan Blaney and Bowman before a late race caution changed everything.

Hendrick Motorsports had a great start to their season last week, with all four cars looking fairly strong at various points in the race. Don’t sleep on his stat line at Fontana; Bowman has arguably the best car in the garage this weekend, and is a steal at this price.

The first of 23 “final times” for Jimmie Johnson will occur on Sunday, as he makes his final start as a full-time driver at Fontana.

In some ways, this is one of the most important of those 23. Fontana is the closest thing to a hometrack for Johnson, as his hometown of El Cajon is just a couple of hours south of the speedway. Fontana was also home to Johnson’s first-ever career Cup Series win, way back in 2002.

Needless to say, everybody on that team is going to be motivated to give the seven-time champion a great finish in his final race at a track that was long a stronghold for him. And with Johnson actually being the highest finishing Hendrick Motorsports driver last Sunday, on a day where HMS in general had a great showing, there’s no reason for it not to be one last great Fontana finish for the No. 48 Chevrolet.

Bubba Wallace paid great dividends last week. As I wrote then, you want somebody who is going to avoid trouble, complete all of the laps, and walk away with a solid top twenty finish.

Needless to say, Wallace did more then that. Wallace ended up finishing an extremely impressive sixth, generating 72.2 points for my team- which is a huge get for somebody so cheap. Had Chase Elliott and Ross Chastain not had late race problems, there’s no reason I wouldn’t be finishing in the money last week, in large part thinks to Wallace’s stellar ride.

So for this week, Wallace gets the gig for another race. Cole Custer is in better equipment at this tier, but he’s also more expansive and is still too inexperienced to trust yet. So Wallace remains the best possible pick at this tier.