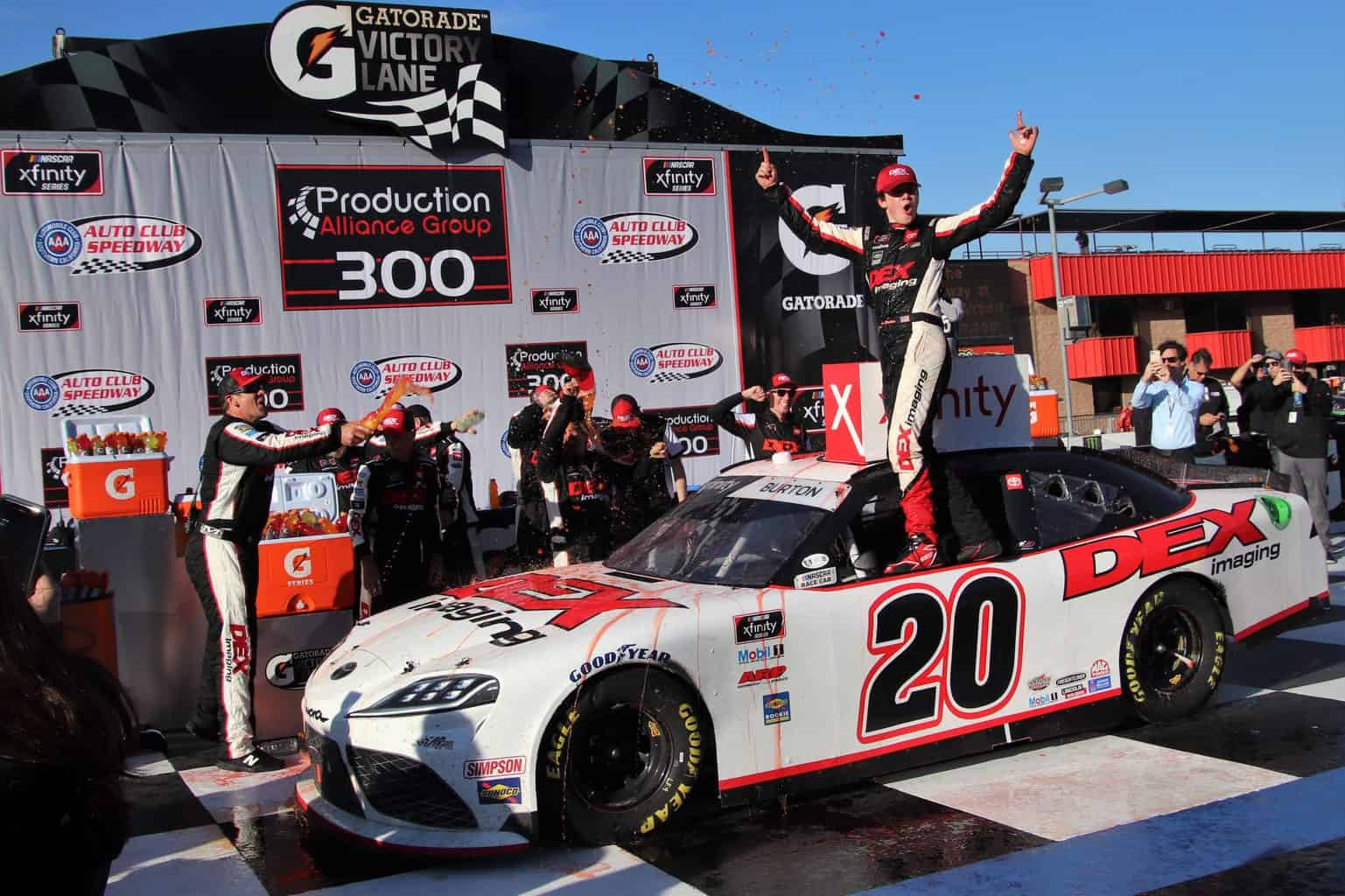 The 19-year-old North Carolina native held off his Joe Gibbs Racing teammate Herbst in the closing laps to get the victory and lock himself into the playoffs. Austin Cindric finished third with Ryan Sieg and Justin Haley rounding out the top five.

“Heck yeah, that’s awesome! So proud of my guys; it feels so awesome to get a win. There’s times when you go through a bit of a drought, you doubt yourself, (so) to get a win it feels so good especially after last year we struggled a bit,” Burton said after his win.

“The car was really fast once we moved up to the top at the end, (and) it was gonna be hard for him to pass us. We were just trying to be smart and not put it in the wall leading”.

In a final stage that featured six caution flags, Burton and Chase Briscoe were battling back and forth for the lead in the closing laps. Briscoe brushed the wall a couple times trying to gain an advantage in the top lane and with 22 laps left in the race, lost control and spun into the infield, bringing out the caution.

Everyone in the top 10 pitted for four tires under the caution, and Burton and Herbst restarted first and second after their stops. When the green flag flew, Herbst was able to get the lead, but within a lap Burton was able to retake the lead on a crossover move and never look back as Herbst was left to duke it out with Cindric for second. Burton was able to stretch his lead to just over two seconds, but it wasn’t over yet. With just five to go, thanks the assistance of some lap traffic, Herbst was able to close the gap to a car length, but was unable to complete a pass coming to the checkers.

The first two stages of the race were dominated by Brandon Jones, who led every lap until  the end of stage two, when he was beaten out of the pits by several others, and with 49 laps remaining, Jones got together with Daniel Hemric and was never able to fully recover. He went on to finish four laps down in 30th after the incident.

From that point forward, it was a battle between Burton, Briscoe and Herbst for the win until Briscoe also found trouble.

Anthony Alfredo finished sixth, followed by Hemric in seventh, Ross Chastain in eighth with Jeremy Clements and Josh Williams filling out the top 10.

The Xfinity Series is next on the track, March 7th at Phoenix Raceway for the LS Tractor 200.

Did the big tire carcass that Justin Allgaier and Riley Herbst hit in the middle of the racing groove come from Brandon Jones’ flat tire 7 laps earlier? Was NASCAR unwilling to throw another yellow flag after 3 restarts? Nothing from the booth analysts saying where that debris came from.