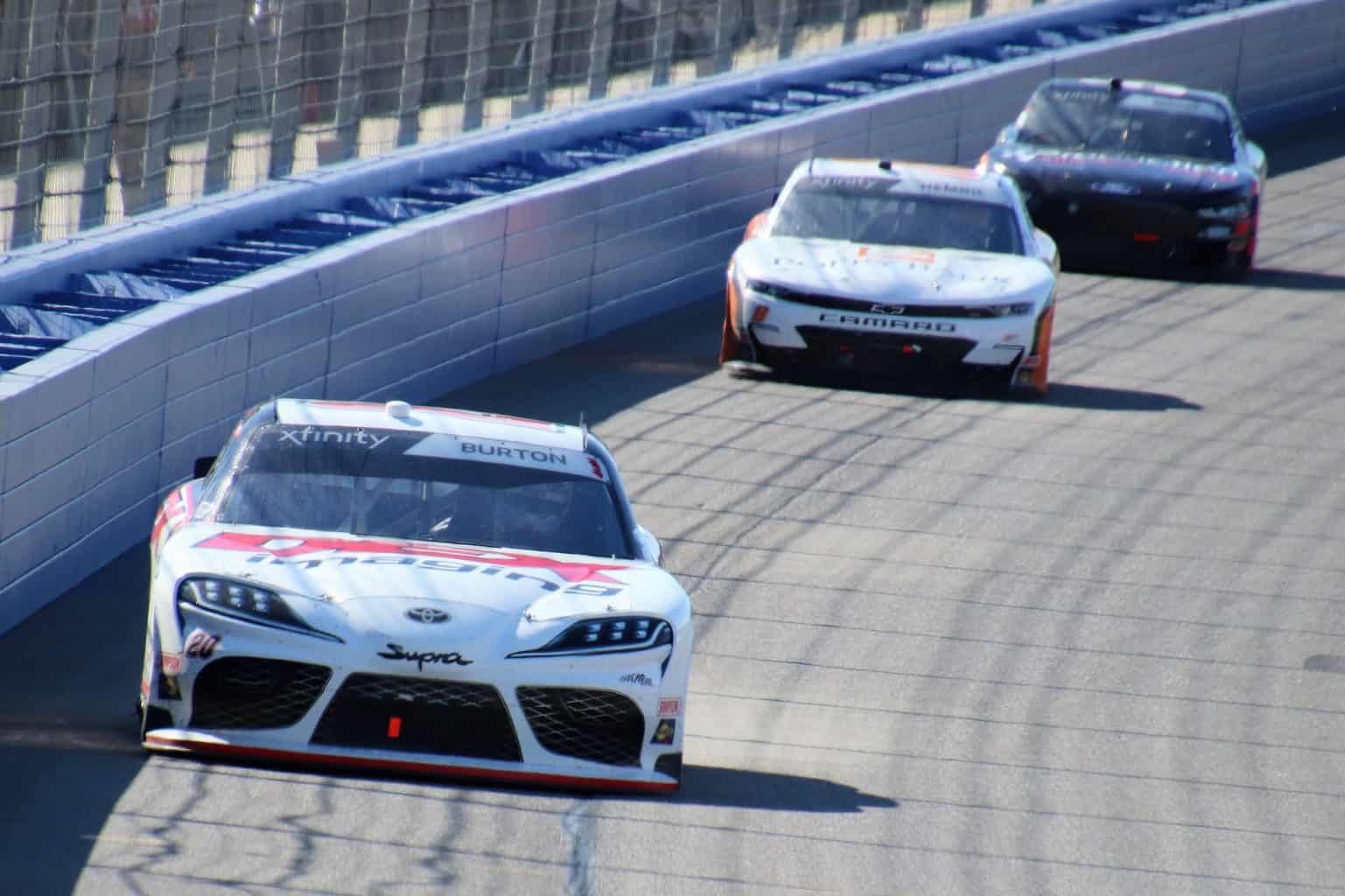 In a visible contrast to last week’s race at Las Vegas Motor Speedway, where unwelcoming rain burst onto the scene, the NASCAR Xfinity Series raced under calm, sunny skies at Auto Club Speedway in California on Saturday afternoon (Feb. 29) for the 2020 Production Alliance Group 300.

Auto Club has historically been a place where rookies have never really shined much; only two drivers have ever picked up their first series win at the speedway, with Hank Parker Jr. in 2001 and Kyle Larson in 2014 each taking his first NXS win on the two-mile oval.

But Saturday, Harrison Burton’s name was added to that short list. The son of 21-time Cup winner Jeff Burton, and nephew of 2002 Daytona 500 champion Ward Burton, picked up the first checkered flag of his NASCAR national series career, getting it done for Joe Gibbs Racing. The win came in just his 12th career start.

After encountering lapped traffic in the closing laps, which allowed JGR teammate, Riley Herbst, to close in rapidly, Burton was still able to hold off Herbst and ride his No. 20 Toyota Supra into the warm California sun to victory (although his car needed a tow into victory lane). Not bad for the 19-year-old. Herbst, Austin Cindric, Ryan Sieg, and Justin Haley rounded out the top five.

With the victory, Burton is qualified into the Xfinity playoffs, something that he wasn’t able to do last year in the NASCAR Gander RV & Outdoors Truck Series with Kyle Busch Motorsports. This also marks his third straight top-five finish in three races this season. So Burton is riding on plenty of momentum heading into Phoenix next week.

Sieg showed great strength again in his family-owned No. 39 Chevrolet Camaro, picking up his second straight top-five result of the season, in fourth place. These performances by Sieg and his team were foreshadowed much in 2019. And now in 2020, they have proved that they are more than capable of delivering these strong finishes on a more consistent basis, and could be in the mix for wins in the future.

The 2020 season for Daniel Hemric got off to a rough start, wrecking out after completing only 20 laps at Las Vegas. But Hemric and the No. 8 JR Motorsports team rebounded in a good way, picking up a seventh-place finish. Although Hemric still has yet to find victory lane in any NASCAR start, his run Saturday showed that he hasn’t lost potential behind the wheel at all.

It seems that the early-season misfortunes from 2019 are following Justin Allgaier again in 2020. His race at Daytona International Speedway ended in a crash, then rebounded for an eighth-place finish at Las Vegas. But Allgaier would catch another wave of bad luck again at Auto Club. He would run over a stray tire carcass laid out on the race track, damaging his front grill and forcing him to pit for needed repairs. Allgaier would limp home in the 12th position.

Chase Briscoe had another difficult ending to his day. He and Harrison Burton swapped the lead several times late in the going, until Briscoe tagged the wall a few too many times and spun off of turn four. Briscoe ended up two laps down in 19th. Fortunately, Briscoe is still locked into the playoffs with his win from a week ago in Las Vegas.

The race started off perfectly for Brandon Jones, including winning the pole, leading the most laps on the day with 73, and winning both of the first two stages. But the ending? It was far from perfect. Following a restart in the final stage, Jones and Daniel Hemric made contact on the backstretch, resulting in Jones being forced to pit for a flat left-front tire, subsequently falling behind four laps and finishing 30th, a disappointing end to a promising start for the Joe Gibbs Racing driver.

Anthony Alfredo made his Xfinity debut in the No. 21 Chevrolet Camaro for Richard Childress Racing, the second driver to make his debut in the car this season after Myatt Snider at Daytona. The Connecticut native qualified 13th and impressively rallied up to finish sixth, barely being edged out for fifth at the line by Justin Haley.

Honorable mentions go to Jeremy Clements and his family-owned No. 51 team with his first top-ten finish of the season in the ninth position, and Josh Williams with the second top-ten finish of his Xfinity career in the No. 92 DGM Racing Chevrolet Camaro, finishing tenth after starting back in 25th.

“All we’ve heard is “we can’t do it, we can’t do it, we’ll never do what last year’s 20 did”, but we’re off to a good start. There’s times when you go through a little bit of a drought and you just doubt yourself, but to get a win, man it feels so good, especially after last year when we struggled a bit.” – Harrison Burton, race winner

“Keep on talking, because we’re coming for more wins this year, for sure.” – Riley Herbst, finished second

The racing at Auto Club Speedway, although strung out at times, still provides a good product. With the rough & wide racing surface, restarts are loaded with intensity. Plus, the amount of constant speed that drivers need to carry all the way around the track is crucial. You may be led to believe that this could be the type of place to take down youngsters and favor veteran experience more. But there are indeed exceptions to this rule, and Saturday showed that younger talent can and will reign on the track regardless of experience levels at certain tracks. The average age of today’s top five finishers is 22.6 years old. Expand that to the top ten, and you get 24.9 years old. And with many of the drivers in this series falling in the younger age bracket, you can expect those numbers to stay in this range for a good amount of time to come.

The Xfinity Series will wrap up its west coast swing on Saturday, Mar. 7, with the running of the IK9 Service Dog 200 at Phoenix Raceway. The race is set for 4 p.m. EST on FOX Sports 1.