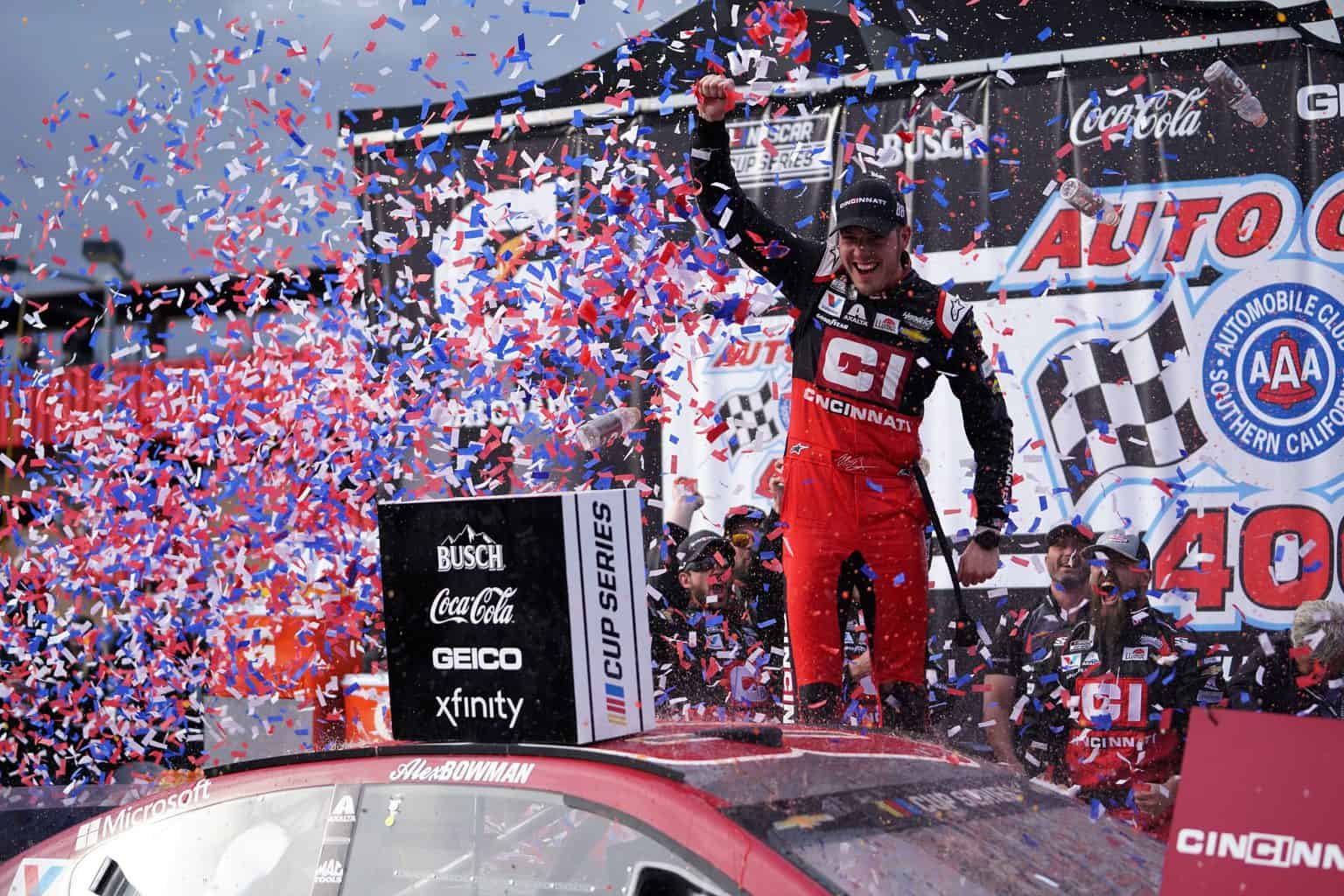 A dominating performance at Auto Club Speedway by a Hendrick Motorsports driver isn’t a surprise — however, it wasn’t the driver most would expect.

Alex Bowman dominated the Auto Club 400 on Sunday afternoon (March 1) en route to his second career NASCAR Cup Series victory. Bowman led 110 of the race’s 200 laps. He had to overcome some adversity but was able to pull through.

“Man, how about that California?” an exuberant Bowman stated to FOX in his frontstretch interview. “We’ve started this year off so strong. [Crew Chief] Greg [Ives] and the guys have been on point. I don’t think we had a change in the race car since it came off the truck. We’ve put a lot of efforts in this new car, and it’s obviously paying off really well.”

The race began with Clint Bowyer and Jimmie Johnson on the front row. Johnson, running his final race at his home racetrack, led the field during the pace laps, and his wife and two daughters waived the green flag to get the race started.

Bowyer led early but quickly gave way to Bowman, who took over and didn’t look back. He won the stage 1, the first ever stage win of Bowman’s career.

On lap 63, the field pitted, and Bowman found himself in a bit of trouble on his pit stop. When the team dropped the car off the jack on the right side, the air hose to his rear tire changer got caught underneath the car, delaying the stop.

The mishap meant Bowman would exit pit lane in the third position behind Johnson and Ryan Blaney. Johnson led the field on the lap 67 restart with Blaney on the outside. Johnson quickly gave way to Blaney, who then took a commanding lead on the field.

Blaney would have that lead until the second caution flag of the day flew when Bowyer lost a tire and spewed debris on the track. Bowyer had cosmetic damage and his splitter was roughed up, but the No. 14 continued. Bowyer finished 23rd, one lap off the pace.

On the lap 93 restart, Blaney pulled away from the field. Bowman would grab second from Johnson during the run but was never able to close the gap on Blaney. The No. 12 took green-and-white-checkered flag to end stage two, the 13th stage win of his career. Blaney then had a slow stop that would cost him the lead, and he exited the pits in the third spot with Johnson and Bowman first and second.

On the lap 128 restart, Johnson took the lead. Shortly after, it was Bowman’s turn to take over the race again. He passed Johnson, then swapped the lead with Martin Truex Jr, before going to the lead for good on lap 133.

Several drivers would experience tire issues toward the end of the race, including Blaney, who was running in the second position when he pitted with just three laps to go with a tire going down. He would finish in 19th, one lap behind the leader.

The Cup Series will next race at Phoenix Raceway for the running of the Fan Shield 500 on Sunday, March 8. The race’s green flag will drop at 3:30 p.m. ET.

Let’s hope that Blaney has had his ‘bad luck comes in 3’s’ moment and he can cash in on his good runs. Must say it’s nice to see some fresh faces running up front for a change.

Amen to that last sentence!!!

It was a good race to watch. Lots of speed and racing. I was glad to see NASCAR didn’t throw a yellow flag for a GWC finish. The fastest car raced his way to front and didn’t get screwed out of the victory.
Regarding Ryan Blaney’s post race interview: Interviewer, quit trying to put words or emotions into the drivers mouths and feelings and you won’t have those discord answers.
Stop the ridiculous burnouts and running up to the flag stand. You are holding up the Victory Circle Show. TV time is valuable. NASCAR, put some ‘brand girls’ back in Victory Circle. We want to see lipstick on the winner’s cheeks.

OK, it was another rainy weekend so I watched my 3rd race of the season (which I said I would watch 0). The last 2 have been better than I thought they would be. Especially yesterday’s race – this track is hardly ever worth watching. I still wouldn’t call either of them good, but they were decent enough I didn’t switch over to let the wife watch HGTV reruns.

That said, I almost, ALMOST flipped the channel after the first 20 laps yesterday because of the constant JIMMIE! JIMMIE! JIMMIE! love-fest in the telecast. Thank God for Blaney and Bowman having better cars and not giving them an excuse to keep blathering on non-stop about JIMMIE! They dropped it just in time, I was ready to bail.

So, the guy has won 80+ races, is retiring , at his home track (not sure but i think he is the all time leader in wins there) qualifies up front, is driving up front… just who should they be talking about at that point in the race? Just wondering.

Seriously, it annoys me as well but it’s the norm. We had to live with the same crap when Gordon, then Stewart, then Dale Jr.all retired. The only good thing is it’s the last season we will have to hear about Johnson. While it annoys me, on the grand scheme of things, it isn’t that big of a deal. Concentrate on the positive…. no BBB every week.

That JJ coverage fills in what really is going on the race track. I can see race cars coming down pit road but no mention from the booth. Because they are not watching the race track in front of them, only their small monitors. In a way, I see more than they do. They have some of the best live views but refuse to use it. It would be better if they sat in the directors trailer viewing all the cameras/monitors around the track and call the race from there. The Networks have taken all this great viewing technology and bottle necked it in a small broadcasting booth.

I totally get the Jimmie focus for the pre-race. I don’t even mind the pace lap salute and his family waving the green flag. But once the green drops don’t get carried away with it during the race. They did OK after the first 20 laps, but I wonder if I’d been able to stand the commentary if he were running where Bowman was all race? Probably not. Mind you, I think it’s worse because we had to spend all last year, every race, “Will Jimmie make the chase?”, and the constant “Will this be the week Jimmie breaks his winless streak”?.

I don’t remember quite that much attention being given to Jeff – I mean, he had winless streaks and missed playoffs of his own, and he got plenty of air-time for his accomplishments over his career too. Just seems to me they go overboard constantly fawning over Jimmie. After all, it IS Jeff who has 7 Real, Legitimate Winston Cup Championships – not Jimmie… :-P

Anyway, I know, I know… first world problems, world’s tiniest violin and all that. I guess it is nit-picky, but that doesn’t stop it from grating on my nerves!