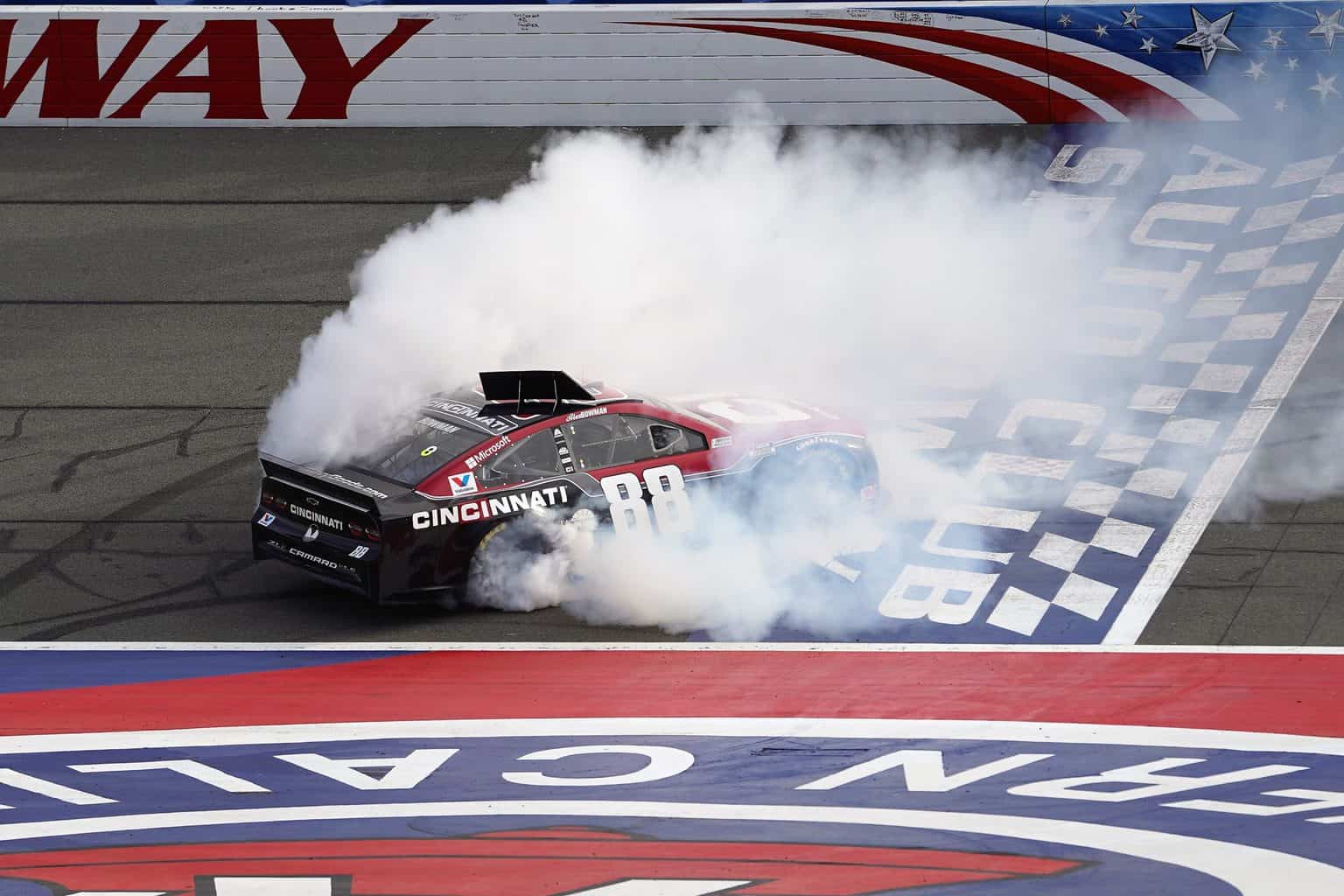 Bowman’s maiden win came at Chicagoland last year, but he would quickly take control at Auto Club Speedway. The Hendrick Motorsports driver led 110 laps, the most of his full-time career and second only to his 194 in 2016 (while substituting for Dale Earnhardt Jr.).

Early frontrunners included Blaney and Jimmie Johnson in addition to Bowman, the trio dueling in a three-wide battle for the lead on lap 71. Johnson finished seventh, while Blaney suffered a flat tire late and was forced to pit in the waning laps. The Team Penske driver finished 19th.

Similar battles occurred throughout the day, particularly after restarts. Kyle Larson and Christopher Bell had the only notable issues of the day, with Larson tagging the wall after contact from Denny Hamlin and Bell having engine issues.

When Harrison Burton moved to the Xfinity Series this season, he had big shoes to fill jumping into the No. 20 Toyota. A ride vacated by Christopher Bell, who made the jump to the Cup Series this season, the team had 15 wins and 41 top 10s in 66 races with Bell behind the wheel.

But it took just three races for Burton to find victory lane in his rookie season after finishes of second and fifth in the first two events this year.

“There’s times when you go through a little bit of a drought and just doubt yourself. To get a win feels so good, especially after last year when we struggled a little bit. Really proud of our guys. The DEX Imaging Supra was fast and once we moved up to the top at the end, it was going to be really hard for him to pass us. Just trying to be smart and not put it in the wall leading.”

For Burton, it was redemption after a 2019 season where he struggled in the Gander RV & Outdoors Truck Series, scoring just 11 top 10s in 23 starts with Kyle Busch Motorsports.

“I had a tough year last year. It pushed me harder and made me better I think,” Burton explained. “That was probably one of the hardest years of my career. Just trying to figure out when and if I was ever going to win one of these things. They can’t take this away from me. I’m excited and there are so many people that thought we couldn’t do this. Our Dex Imaging Supra team is bad-to-the-bone and we got it done.”

As far as the bigger picture is concerned, Burton leaves Auto Club with the point lead after a strong start to his 2020 campaign. With finishes of second, fifth and first, he’s already sent a message to the rest of the competition that he will be in the championship conversation later this year. The bigger question is just how many wins he’ll take into the playoffs.

“We’re in the playoffs, we don’t have to win – that’s not how we’re going to roll. We’re going to go and attack next week like we didn’t win this week. That’s how my whole team is, we just want to go out and execute and do our job every weekend.” – Beth Lunkenheimer

Sports Cars: The 24 Hours of Le Mans Entry List Has Been Revealed

The ACO officially released the 62-car entry list for this year’s 24 Hours of Le Mans Friday (Feb. 28).  There are a number of givens on the list, along with some surprises.

There are 10 criteria for automatic entries.  Full-time FIA World Endurance Championship (WEC) teams get in.  Defending 24 Hours of Le Mans class champions get in, along with the top two teams in the European Le Mans Series’ LMP2 and GTE classes.  The ELMS LMP3 champions get an auto-invite for the LMP2 class, along with the Asian Le Mans Series LMP2 and LMP2 Am class champions.  The Asian Le Mans Series’ LMP3 champ gets in and can use their invite in either LMP2 or GTE-Am, while the Michelin Le Mans Cup GT3 champ gets a GTE-Am invite.  Finally, there are two at-large invites given to drivers from the IMSA WeatherTech SportsCar Championship.

Ultimately, there were 75 teams that submitted entries for the race.  62 earned a spot on the list, six in the LMP1 class, 24 in LMP2, 11 in GTE-Pro, and 20 in GTE-Am.  The 62nd entry is an Innovative LMP2 car that will be shared by three paraplegic racers.  10 more teams are on the reserve list.  The other three were rejected.  About a dozen of these teams are either teams that race in the United States, or have drivers that race here.

Cody Ware’s championship in the Asian Le Mans Series’ LMP2 Am class got him an auto-invite.  The team will race their Riley Mk. 30-Gibson that was withdrawn from Daytona.  The GTE-Pro class has five IMSA teams.  Both of the Chevrolet Corvette C8.Rs will race, while Risi Competizione will field an all-French lineup led by Sebastien Bourdais.  Porsche GT Team has four cars.  Nos. 93 and 94 are the IMSA Porsches, but with a revised driver lineup.

Katherine Legge and Christina Nielsen are racing together full-time in IMSA.  At Le Mans, they’ll race separately.  Legge will compete with her LMP2 team from ELMS, Richard Mille Racing Team, with Tatiana Calderon and Sophia Floersch.  Nielsen will be in a GTE-Am class Ferrari under the GEAR Racing banner.

Teams that ended up on the reserve list include a second High Class Racing ORECA 07-Gibson that has Jan Magnussen and a second DragonSpeed entry with Ben Hanley and INDYCAR racer Felix Rosenqvist.  If one of the 62 teams on the entry list withdraw, then the first reserve gets in.  Currently, the first reserve is Spirit of Race’s No. 55 Ferrari for the GTE-Am class. – Phil Allaway

Pole sitter Clint Bowyer also had a notable issue and I believe brought out the only caution of the day with a flat left front that ground the splitter off that car. He was a non-factor after that.