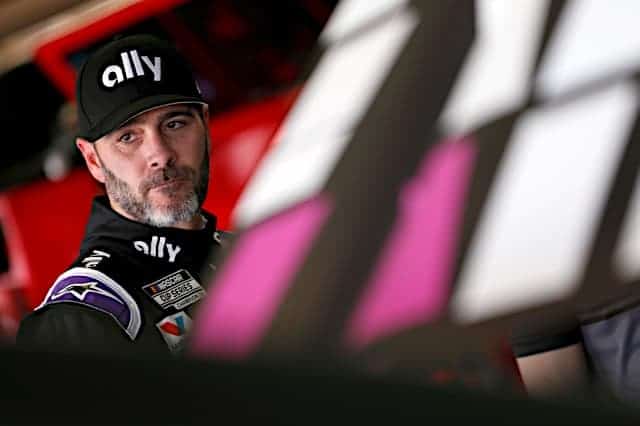 Over the years, Auto Club Speedway has turned into one of the more entertaining races of the season. With an aging track surface (oldest on the Cup circuit), managing tires is a premium and restarts are wild, which is what we saw this past weekend.

Even though Fontana favors big teams, small organizations came to play — specifically in the Xfinity Series — and Jimmie Johnson ended his NASCAR career at ACS completing another full race.

Flashback to 2002. It was Johnson’s first race at Auto Club Speedway in his rookie season. What did he do? Led 62 laps en route to his first career victory.

Since then, Fontana has gone through a plethora of changes. The track was awarded a second date in 2004, spanning through 2010. While attendance declined, the Southern California track lost a Cup date and attendance increased while the action on-track became fast and furious.

Through it all, one thing stayed the same: Johnson finished races. On Sunday (March 1), he likely ran his final race on the 2-mile track, so it was only fitting he led 10 laps en route to a seventh-place finish. By finishing on the lead lap, Johnson completed 5,906 laps of 5,906 laps in 26 starts at his home track.

Competitive throughout the race, @JimmieJohnson finished seventh in his final race at his home track.

Finishing on the lead lap in every race at a single racetrack is very rare. Johnson ends his career at Fontana with a track record six victories, 13 top-five finishes and 18 top 10s. Impressive.

This column is now a month old, and Ryan Sieg is making a staple of being in it. After all, he finished fourth at Auto Club over the weekend, the first time he’s had two top-five finishes in a row during his 205 career Xfinity Series starts.

Not only is Sieg recording good finishes, but the No. 39 team was a factor throughout, picking up stage points in both stages.

Remember, Sieg’s RSS Racing team has just a handful of full-time employees. And who did the No. 39 team finish behind? Two Joe Gibbs Racing drivers (Harrison Burton and Riley Herbst) and Austin Cindric from Team Penske.

Man @RyanSiegRacing has to be excited. He is so close. Over performing ?

The old adage is to win a race first you must consistently run in the top five. Sieg has done that to kick off the 2020 season.

Like RSS Racing, Williams’ DGM Racing doesn’t have many hands working on his No. 92 car. But through the first three races, he has an average finish of 16.3, and that includes a 26th-place finish at Daytona, which he was in contention for a top 10.

On last week’s Frontstretch Podcast, Williams said making the playoffs is a realistic goal for the No. 92 team. With runs like Saturday (Feb. 29), he’s gaining on the bubble, sitting 15th in points.

With very little Cup teams running Xfinity, and hardly no Cup drivers running….. 2020 will be the year of the under dogs. You will see some of the small teams run in the top 10 every week.