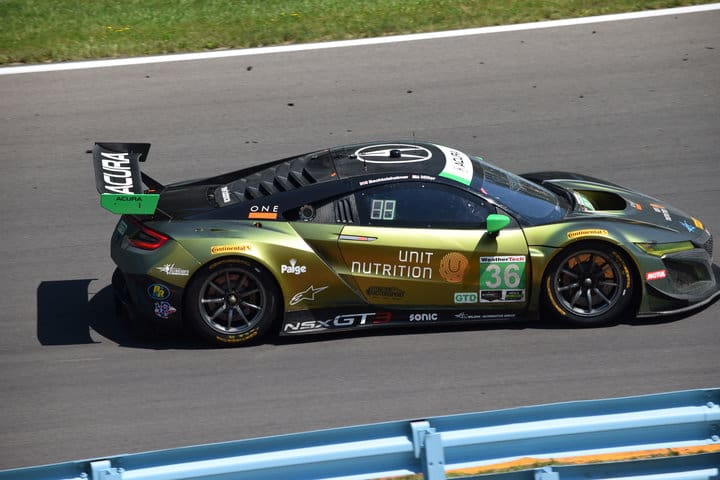 Graident Racing announced Wednesday (March 4) that they will return to the IMSA WeatherTech SportsCar Championship in 2020 and make a run at the WeatherTech Sprint Cup in the GT Daytona.  Longtime teammates Marc Miller and Till Bechtolsheimer will reunite to share the No. 36 Acura NSX GT3 starting at Long Beach in April.

“2019 was a really good year. I won a Trans-Am title and Till and I were able to grab a GT3 win and and some podiums for Gradient Racing,” Miller said in a press release.  “IMSA…has always been our main goal, the level of competition in GTD compares with any Championship in the World!  Knowing we have a chance to compete full-time in the IMSA Sprint Championship is extremely exciting.  I look forward to having the opportunity to focus completely on our GT3 program this season.”

Last season, the team competed in Blancpain GT World Challenge America in the Pro-Am division.  Bechtolsheimer drove the full season in the No. 5, but had three different teammates.  Miller drove in four of the seven race weekends, but Ryan Eversley was Bechtolsheimer’s teammate for the first two race weekends.  Trent Hindman filled in at Road America in September.  Bechtolsheimer and Miller won the first race at Canadian Tire Motorsport Park and had three other second-place finishes in class (two with Eversley and one with Miller).  As a result, Bechtolsheimer ended up fifth in Pro-Am points.

In addition to racing alongside Bechtolsheimer, Miller competed full-time in the Trans-Am Series presented by Pirelli’s TA2 class, driving a Dodge Challenger.  Miller won four races and finished on the podium eight times en route to the TA2 championship.

For IMSA fans, the Gradient name will be new to IMSA, but this is the former CJ Wilson Racing.  As CJ Wilson Racing, the team competed regularly in what is now IMSA Michelin Pilot Challenge.  They started out in the Street Tuner class, first with Mazdaspeed 3s, then with the Mazda MX-5.  In 2016, the team acquired Porsche Cayman GT4 Clubsports and moved up to the Grand Sport class.

When the Grand Sport class went full GT4-spec at the end of 2017, the team had a choice to make.  Their Cayman GT4 Clubsports were not full GT4-spec cars.  At that point, the team chose to acquire an Acura NSX GT3 (pictured above) and do a part-time schedule in the IMSA WeatherTech SportsCar Championship’s GT Daytona class.  They ultimately made two starts with a best finish of 11th in class at Watkins Glen.

After 2018, the team split apart.  CJ Wilson is no longer involved with the team.  The team regrouped under the leadership of team manager Andris Laivins as Gradient Racing.

While Gradient Racing will not be racing their Acura in the newly-rechristened GT World Challenge America powered by AWS this weekend at Circuit of the Americas, their influence will still be felt there.  The team entered into a partnership with Honda Performance Development (HPD) to build the new Honda Civic Type-R TC, which will compete in TC America’s TC class in 2020.