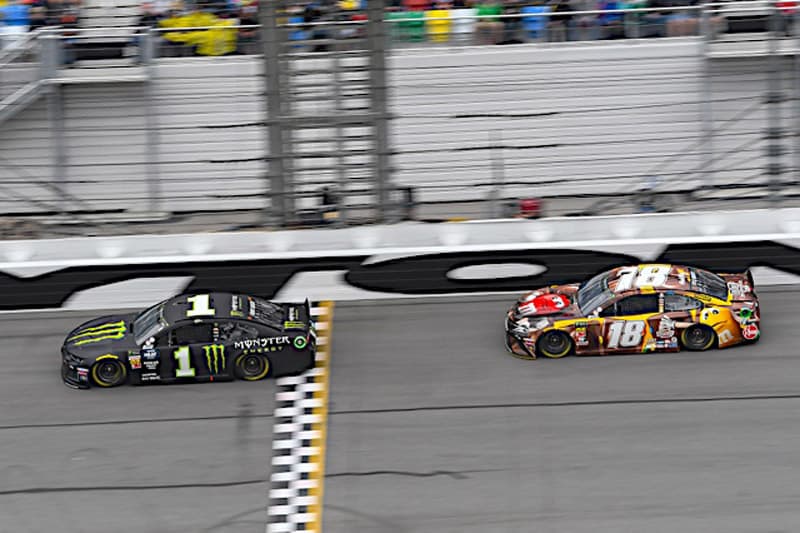 The events leading up to the 2021 Daytona 500 at Daytona International Speedway will look a bit different, starting with the Busch Clash, the track announced Wednesday (March 4).

The schedule will be much more condensed, as all events will be run within six days.

Most notably, the Busch Clash will be on Tuesday, Feb. 9 under the lights on Daytona’s road course. The course has been used for IMSA’s Rolex 24 at Daytona and the Daytona 200, which feature sports cars and motorcycles, respectively.

“We continue to look for opportunities to differentiate the Busch Clash from the Daytona 500, and obviously everything we do around Speedweeks presented by Advent Health is about building toward the 500,” Daytona president Chip Wile said. “This is about how we can continue to push and elevate the Busch Clash to be something different. And we’ve done that with a lot of new initiatives the first weekend.

“We’ve seen growth year over year with the Busch Clash and that weekend, but to see the resurgence in road-course racing and the excitement around it from the fans, we thought, why can’t we do this.”

“The famed road course at Daytona has a long and storied history with sports cars and motorcycles and now we can write a new chapter on it with stock cars,” Ben Kennedy, NASCAR’s Vice President of Racing Development, said. “Fans coming to the track will get to see six consecutive days of exciting NASCAR action, with no days being the same.”

“NASCAR fans have asked for more road-course competition and the industry is listening,” Wile said. “With the talent level the Busch Clash brings to the table, the race will now clearly have its own look and feel during Speedweeks in 2021.

“The new placement on the Speedweeks schedule also adds to the anticipation. That switch will make for a fuller Speedweeks calendar. Fans also will have the opportunity to engage in a festive infield atmosphere similar to the Rolex 24 at Daytona.”

Following Tuesday’s Busch Clash will be Daytona 500 Qualifying presented by Kroger, which will be held on Wednesday, Feb. 10. Then on Thursday evening, the Cup Series teams will compete in the Bluegreen Vacations Duel races to set the rest of the lineup. The NASCAR Gander RV & Outdoors Truck Series race will be on Friday, Feb. 12.

The Xfinity Series’ season opener and the ARCA Menards Series’ Lucas Oil 200 will be the events in a Saturday doubleheader.

I like this for those fans who decide to spend a week of vacation down there for speed weeks. It may not have a lot of impact on TV viewership but then again people stay up late to watch MNF so I am sure people will stay up for TNN <- Tuesday Night Nascar haha

I like this and the condensed schedule might even have an increase in attendance as fans can make a full week out of it. Just need to fix the start time for the 500 to earlier in an attempt to avoid the Florida showers and t-storms. I might even see about going now for the week. Have never done Speedweeks in my 40+ plus years as a fan.

Worst case this does not work well and the Daytona folks can rearrange for 2022. The only thing that might change for 2022 is having the Clash back on the oval but I hope they give this a few years trial as one year is not enough to judge fan acceptance.

Having just got back from Speedweeks, I like the schedule move. I was just no feasible for me to stay 10+ days and attend all the NASCAR events. I was there from Wednesday to Tuesday. If I go back in the future it makes me more likely to add a couple extra days for the Clash and Pole Qualifying. The road course will be a fun experiment. I wonder how much of a draft they will pull on the oval portion?

The car owners probably went screaming to NASCAR after the last crash-fest Clash due to the huge cost of running the event. Joe Gibbs said in victory lane that he spent way more than he made on Jones’ Clash victory. And when Reverend Gibbs speaks, NASCAR listens…

Due to the TV contract with Fox, I suppose the Clash will have to limp along until their contract is up in 2024. As it is Fox degraded the coverage of the Clash over the past few years from their broadcast network down to FS1, where the potential viewership is much smaller. This decreased viewership impacts ad rates and sales, too. I noticed that there were almost as many non-rev, Fox and NASCAR promos on the Clash broadcast than actual ads.

Well don’t understand still having duels. Probably will b 2 cars racing for 1 space on the grid. Everyone else automatically in. And as jimmy johnson said years ago doesn’t matter where u start.