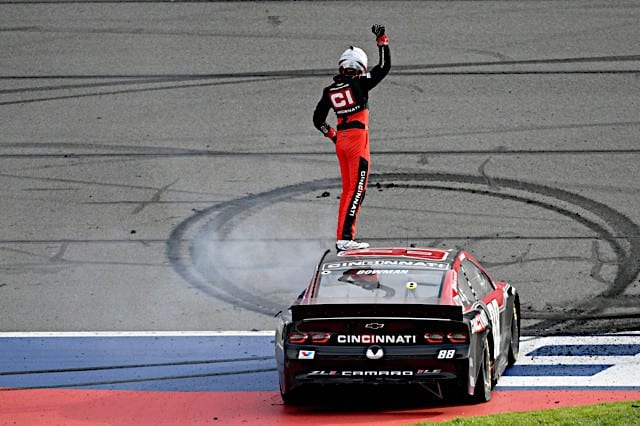 Sunday’s Auto Club 400 was certainly a surprise to a lot of people. Alex Bowman went out and dominated the event, leading 110 of the race’s 200 laps. Bowman, a driver with just two previous NASCAR wins before Sunday, was a driver that a lot of people considered to be on the hot seat for the 2021 season.

There are several big name drivers who will hit the free-agent market for the 2021 season. Bowman is not the most well-known driver on the circuit and his resume doesn’t have a lot of wins on it. However, he has done an admiral job in the No. 88 car over the last couple of seasons and Sunday’s win proves he can get the job done with the right circumstances.

But does that mean he should continue to drive for Hendrick Motorsports? The organization has had trouble selling sponsorship on the No. 88 Chevrolet and with big-name free agents looming, Bowman’s fate is still in question. That led us to think: Does Sunday’s win mean that Alex Bowman should drive the No. 88 Chevrolet for 2021 and beyond? Our writers Clayton Caldwell and Mark Kristl debate.

There’s still more to prove for Alex Bowman. I don’t think there’s any doubt that his run in Sunday’s race proves that when the car is right, he can go to victory lane. However, I am big on consistency and so far Bowman hasn’t proven that he can win consistently or perform on a consistent basis in his Cup career. Add that with the fact that he isn’t a well-known driver and may not be able to sell himself as well as some other drivers may be able to. That could mean less funding for Hendrick Motorsports and that never helps a team.

Last season Bowman had a similar win at Chicagoland Speedway. It was a victory that took a lot of people by surprise and proved he can go to victory lane in the Cup Series. When he won the race, there were 19 races to go in the 2019 season and some thought he would be able to carry that momentum into a strong playoff run.

That wasn’t the case. In the final 19 races, Bowman had a tough time finding consistency. He finished the season with just five top-10 finishes in the final 19 races and finished a disappointing 12th in the series standings. He seemed to really have a lot of trouble with the short-track package at the back end of the year.

So far in Bowman’s two years at Hendrick Motorsports he has finished 16th and 12th in the series standings. The expectations for a Hendrick Motorsports car are bit higher than that. Plus, the free agent market heading into the 2021 season is going to be full of big-name drivers.

The list includes several former champions of the Truck, Xfinity and one driver is even a former Cup Series champion. Many of those drivers have more wins than Bowman does in their NASCAR career as well. The stats don’t show the whole picture, but those accomplishments not only prove that those other drivers can drive, but they are much more recognizable because of their past accomplishments.

Alex Bowman doesn’t have those accomplishments, so it puts him in a situation where he has to make his name in the Cup Series. Sure, his wins have been impressive but depending on who can sell to the sponsors, the organization may be better off with someone else in the No. 88 car moving forward. Bowman’s win last season woo the sponsors to him in 2020. There’s no doubt he needs to do more to do that in 2021.

In the end, there is still a lot to prove for Alex Bowman in the 2020 season. If he doesn’t improve on his consistency, I believe Hendrick Motorsports will be better off with someone else in place in 2021. – Clayton Caldwell

Bowman is improving – why replace him?

Hendrick Motorsports absolutely should keep Bowman next year. He is improving as a driver and he likely is already locked into the NASCAR Cup Series playoffs this season. Why replace him?

Before he competed full-time in the Cup Series, Bowman only competed full-time in one season in the NASCAR Xfinity Series. He drove the No. 99 RAB Racing Toyota to an 11th-place finish in the championship standings. He accumulated two top fives and six top 10s, but he could have benefited from another full-time season.

However, he lost his ride with the team before that season finale. For the next two seasons, Bowman drove for underfunded Cup Series teams BK Racing and Tommy Baldwin Racing. While his performance was not stellar, he gained two positions in his second full-time Cup Series season, even if it was from 35th to 33rd.

Then he moved to Hendrick Motorsports to fill in for an injured Dale Earnhardt Jr. Since then, Bowman has only gotten better. His number of top-10 finishes, his amount of lead lap finishes, and his average finishing position all have risen in his three seasons with the team.

Last season, Bowman only had two DNFs, at Phoenix Raceway and Talladega Superspeedway. Although his average finishing position was a decline from his average starting position, Bowman showed resilience.

He battled Kyle Larson at Chicagoland Speedway and his first career Cup Series race. At the Charlotte ROVAL, he overcame adversity, including a heated exchange with Bubba Wallace, to the Round of 12 in the playoffs.

Admittedly, Bowman did not lead laps at many races last season, but Hendrick Motorsports was partially at fault there. Chase Elliott won three races, but William Byron and Jimmie Johnson also failed to win, and Johnson missed the playoffs. Bowman showed improvement even as Hendrick Motorsports struggled to adapt to the new package.

This season, Bowman and Hendrick Motorsports appear to have made the necessary adjustments. Bowman won at Auto Club Speedway, Johnson and Elliott are both above the playoff cut line, and Byron has consecutively improved his finishing position in all three races this season.

Bowman is only 26 years old. His teammates Elliott and Byron are only 24 and 22, respectively. Those three are cornerstones for Hendrick Motorsports for this year and many more to come. Why change that?

Additionally, seven-time champion Johnson will retire from full-time competition after this season. Hendrick Motorsports has a massive decision to make. Who will replace Johnson in the No. 48 Chevrolet?

The organization already must fill one seat; there is no need to make an unnecessary change and fill another.

If the team signs an established driver such as Brad Keselowski or Kyle Larson, then it may be easier to sell sponsorship for races. If the team opts to hire a Xfinity Series driver such as Justin Allgaier or Ross Chastain, then the team could market them as a newcomer. Rick Hendrick has won championships with drivers Terry Labonte, Jeff Gordon and Jimmie Johnson. He is a smart team owner – he will figure it out.

Lastly, there have only been three Cup Series races this year. Bowman has already won one race and likely made the playoffs. He and crew chief Greg Ives can afford to gamble a bit more to accumulate more stage wins and overall victories. If they are successful, Bowman’s stage win and Auto Club 400 victory will not be his only playoff points this season. And winning, at least at the Cup Series level, makes the decision for Hendrick Motorsports to retain him that much easier. – Mark Kristl

this is what i hate about the sport now. new guys can’t have a bad season. there’s no learning curve but they’re snatched up quickly from xfinity series. sure they’re racers, but cars are different.

hendrick doesn’t have any “big names” to fill the gap after johnson retires. sure chase, but he’s still young, and the elliott name is more tied to bill’s statistics. sponsors want that big name to sell their products.

when he subbed for jr, bowman ran better in the car than jr has for a while. sure jr was playing hurt, but still he generated interest in the 88 team while jr was out.

i can’t imagine brad going to hendrick to take over the 48. the 48 will be tied to johnson, just as the 24 is still thought of as jeff gordon and the 3 as dale sr.

The aerodynamic quirks of the Camaro for the last two years have kept Larson and Jimmie Johnson both out of victory lane. This year’s ‘new body’ has gotten the Camaro back to parity with Ford and Toyota. Its too early to assess talent in these cars.
But I think the bigger question is whether any of these drivers can drive the drastically different new car with less chassis compliance in 2021? I’m thinking Bowyer is taking a huge risk. I feel that same way about Larson, but he is way more adaptable and marketable. Besides, Larson is way to good a fit at SHR. I see Keselowski be a man on the move, perhaps with a crew chief.

One thing in the against argument was how Bowman ranked in the standings but that argument is invalid since Byron and Johnson both ranked lower.
I am still confused how Elliot could go head long into the tire barrier and not have ripped up the front and come back and win the race. Very odd.

One thing neither person pointed out is this possibility. Could the 88 or 48 close down and HMS be a 3 car team? With sponsorship issues and the state of the sport this is also a better than iffy possibility.

Kyle Larsen has only won 5 times. Bowman 3 times. So maybe Larsen isn’t such a hot property? Or Bowman is?

Damn, most years maybe 13 drivers win a race at all in a year. If you are asking this question about Bowman,,,,, tough crowd.

I think it depends on whether on not Chevy wants to let Larson go or not. I don’t think with the economic climate that Hendrick can afford both a Larson and a Keselowski. Don’t rule out Ryan Blaney moving over as well since he is also in a contract year.

Bill B
Reply to  jc

Hahaha, you should have waited a few more minutes before you posted your comment. Blaney has extended his contract with Penske.

jc
Reply to  Bill B

Timing in life is everything..….It is what it is!

HaHa – Right on.. I wonder if that means Roger already knows Kes is out the door. That said, I’m sure he would rather find a way to not have to promote his President’s over-rated son up to Cup full time.