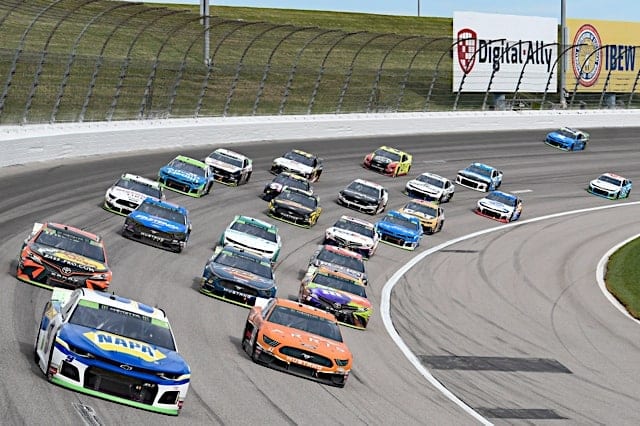 Is it a dirty word, or isn’t it? You certainly hear it a lot, tossed around in conversation, sometimes like a shining example of what racing should strive for, but sometimes more like a bug to be squashed before it gets too big.

The truth is probably, as it so often really is, somewhere in between. Without some level of parity, there’s no variety in NASCAR. One manufacturer, one team, even one driver would run away with everything with which there is to run away.

You say that happens now? It could be much, much worse.

Right now there are several teams capable of winning, with cars fast enough if the driver can make the move and the crew can make the adjustments and stops. Teams can enter the sport at the top level and grow, even to top-tier status, over time. It takes a lot of time and a lot of money, and not everyone will make it even with plenty of both, but there is a chance. That’s important.

It’s also important for even underdog teams to have a fighting chance to be competitive. Fans pull for the underdog. They like to harbor at least the illusion that the stars could align for one of these drivers. NASCAR needs to keep that it-could-happen ideology alive and well, even if it is largely unlikely.

There’s a definite and delicate balance here: keeping the sport such that there are plenty of competitive teams and the idea that anything can happen remains alive versus homogenizing the whole deal. It’s a pretty fine line, and NASCAR has erred toward the latter more often than the former. But where does party come from — and where does it go too far?

This one’s important for a few reasons. One, NASCAR has seen dwindling participation from manufacturers over the last couple of decades.  Part of that’s because General Motors dropped the Pontiac label, but it’s also because Dodge dropped out of the game. Yes, Toyota came in, but there’s still not much variety.

There are plenty of race fans whose loyalty lies with manufacturer first, driver second. If those fans feel that their make is at an unfair disadvantage, it’s not a good look for NASCAR.

Is there some sour grapes in that? Of course. And NASCAR doesn’t need to return to the 1990s car wars when makes were lobbying for—and getting—changes seemingly every other week in an attempt to gain an advantage.

It simply needs to be as fair as possible, with no team at a disadvantage simply because of the cars in its stable. So far this year, we’ve had that, and fan response has been very favorable as a result. That’s what everyone involved needs.

Also important—to a point. Sponsorship costs skyrocketed in the early and mid-2000s and that hurt everyone, even the teams responsible, but particularly the smaller teams because the gaps in budgets among top, mid-tier and small teams widened to the point where that anything-can-happen illusion has faded considerably.

Some kind of spending cap is becoming increasingly more worth exploring.  But that’s where this one should end.

Teams need to have the ability to find their own advantages. That doesn’t have to mean a free-for-all of spending or overly creative engineering, just allowing teams to discover their own speed.

Absolutely necessary. But not the way NASCAR is doing it now.

Hopefully the next-generation engine package will allow for lower horsepower without the restriction of the current tapered spacer.

Yes, teams will find ways to produce more power, and NASCAR needs to monitor and adjust to that.  And anyone whose engine doesn’t meet the rules should be in big, big trouble with the powers that be. While choice and innovation are important in other aspects of the cars, the engines have been virtually untouchable over the years, and that needs to remain a level, fair playing field.

Parity elsewhere in the rule book

While manufactures shouldn’t have an inherent advantage, spending should be controlled to keep advantages from being solely monetary and engine rules should be rock solid, teams should absolutely be able to find their own advantages.

What works for one driver might not for another. A certain suspension setup could be an advantage or a disadvantage based on who’s driving it—and that’s how this whole thing should work. A certain gear selection might make a team faster, but it might also implode under a certain driving style and end the day early for a team.

Those risks need to be a part of the game. The playing field should be level and the rules fair, but teams need to be able to write their own playbooks.

The term parity is hardly applicable to pit crews, especially within the current format of a NASCAR Cup race. An artificial/contrived “caution” by way of the stage green/white checkered flag – for what, to promote a sponsor(?) – needs to have some adjustments, if it is to continue.

Why should the teams that put a package on-track that is good enough to work up to a Top 10 position, within distance of a possible win, see that advantage lost due to a penalty through a fake caution? The end of a stage should not affect the order of the cars on the track when racing resumes. Nor should pit penalties be anything but self-imposed by a team that has issues that need to be dealt with anyway.

Stage format should be revised.

1. Car positions are frozen by the green/white checker

2. All cars enter pits together at safe speed, NO speed advantage.

3. NASCAR dictates total time for pit service – as long as max time is not exceeded, without speed penalty on pit-out, car resumes it’s relative position as set by 1. above. Any car not able to return to track within the alloted pit in/out time loses its position, as directed by race director.

4. Pace vehicle parks in a designated position on track, where all cars re-align to running order set by 1., unless pit out time is exceeded – those cars form at rear as dicated by total pit time. Field resumes moving at decision of race director.

Many will argue against this, but it’s one area where the “playing field” is anything but level – those teams with well-developed pit crews are still able to excel in regular caution situations, which are not guaranteed, but doing the stage pit sequence as it is now only continues to show the difference in the “haves” and “have nots”.

I believe it deserves a look, to do away with the 7 to 10 laps under a stage caution seen at some tracks today, especially short tracks. The paying customers are being cheated out of those laps of green-flag action.

Like Bill Harper’s stance on stage cautions. Have those positions be stable and to address pit strategy choices, if a team chooses to pit under green before the stage end and stays out (does not “stage caution” pit) that team should be moved to the front, provided do not go a lap down in the process of pitting, and the other teams then line up behind in stage finish order as described above.

This would be an excellent compromise and since stage racing’s inception, I have always been irked by the caution laps counting into stage 2 and stage 3. Lessens the actual action laps as Bill noted above.
Also figure out how to get the 600 back to 3 stages. It should not be worth more points because NASCAR can’t count or think through things. It’s pretty darn easy 120, 120, 160 or better 110, 110, 180

Or they could just do away with stage breaks altogether.

Carl, considering that NASCAR isn’t known for backing-down from ideas that TV likes, I don’t think we can count on that, so we have to take a run at it with the idea of making it more bearable, and in the process, fairer – which is what the theme of Amy’s discussion of parity was directed toward. I don’t know if the ideas I presented are truly workable, but the “stage” caution is inherently unfair, so some tweaking of the process ought to at least be tried, whether on one track, or one type of track (short track?) to see if it’s workable.