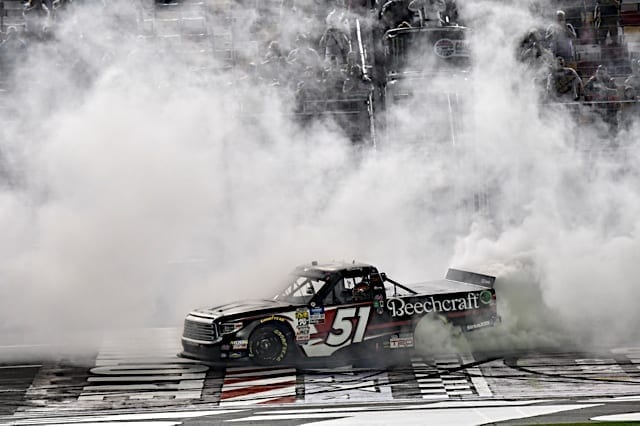 Although the NASCAR Gander RV & Outdoors Truck Series is off this weekend, the hoopla surrounding the series is higher than I can ever recall during a break. That reason is because of the bounty on Kyle Busch, both by Kevin Harvick and Marcus Lemonis as well as the one established by Halmar Friesen Racing team owner Chris Larsen.

The anticipation for the entry list for the 2020 Georgia 200 at Atlanta Motor Speedway is now higher than it would have previously been if not for the bounty. So who are the NASCAR Cup Series drivers competing in that race, outside of obviously Busch?

Reportedly, Austin Dillon and John Hunter Nemechek are working on securing rides for the race. Dillon’s Cup Series team, Richard Childress Racing, does not field a Truck Series team, though he has an offer for that race.

Even though CMI Motorsports has only one top-10 finish, if Dillon drives for that team, it would certainly garner them some recognition. Additionally, if Dillon gave that team a good finish, the team could market it for sponsorship and perhaps become more competitive.

For mid-tier to lower-tier teams such as Reaume Brothers Racing, Jennifer Jo Cobb Racing and Roper Racing, having a Cup Series driver competes for their team, the teams would also garner recognition and vital owners’ points.

These bounties should lead to a full field at Atlanta Motor Speedway. Both Elliott and Poole will be driving part-time entries which will debut in this race. If NEMCO Motorsports fields one or two entries, there will be two competitive vehicles as well.

For some of the full-time Truck Series teams which are low in the owner point standings, qualifying will be even more paramount. Of the teams which have attempted both races thus far this season, the bottom three in the owner point standings are the No. 49 CMI Motorsports entry, the one offered to Dillon, the No. 10 Jennifer Jo Cobb Racing entry, which has failed to qualify for both races and the No. 7 All Out Motorsports entry, a family-owned team.

These three teams are at risk of failing to qualify for the race. Not only is that costly, it does not help these teams as they are seeking owner points to improve their odds of making the field.

With at least three Cup Series drivers set to compete in the Georgia 200, those drivers could steal stage points and points from the finish from series regulars. The bottom three drivers in the point standings who have driven in both races thus far are Austin Wayne Self, Tate Fogleman and Angela Ruch. For all three drivers, losing spots to these Cup Series drivers hurts their odds of making the playoffs.

The bounty is good for the Truck Series because it is only for four races. Then the Truck Series will have the Triple Truck Challenge, which will shine the spotlight back on the series regulars because only two drivers, Noah Gragson and Johnny Sauter, have bested Busch in his last nine Truck Series starts.

These four races have 28 playoff points on the line. If Busch or any other Cup Series driver wins either a stage or the race, or both, those are lost playoff points. Come the penultimate race at Martinsville Speedway, those playoff points could aid a driver advance to the Championship 4.

There is much debate on whether Cup Series drivers should be allowed to compete in Truck Series races, and if so, how many races. The domination by Busch at Las Vegas Motor Speedway led to these bounties, and inherently, has bolstered interest in the series.

Can we all just take a moment to thank @KevinHarvick for his initial mention of $50k for a full time Cup driver to beat @KyleBusch? How many of yall would be talking @NASCAR_Trucks right now if he hadn't? #NASCAR