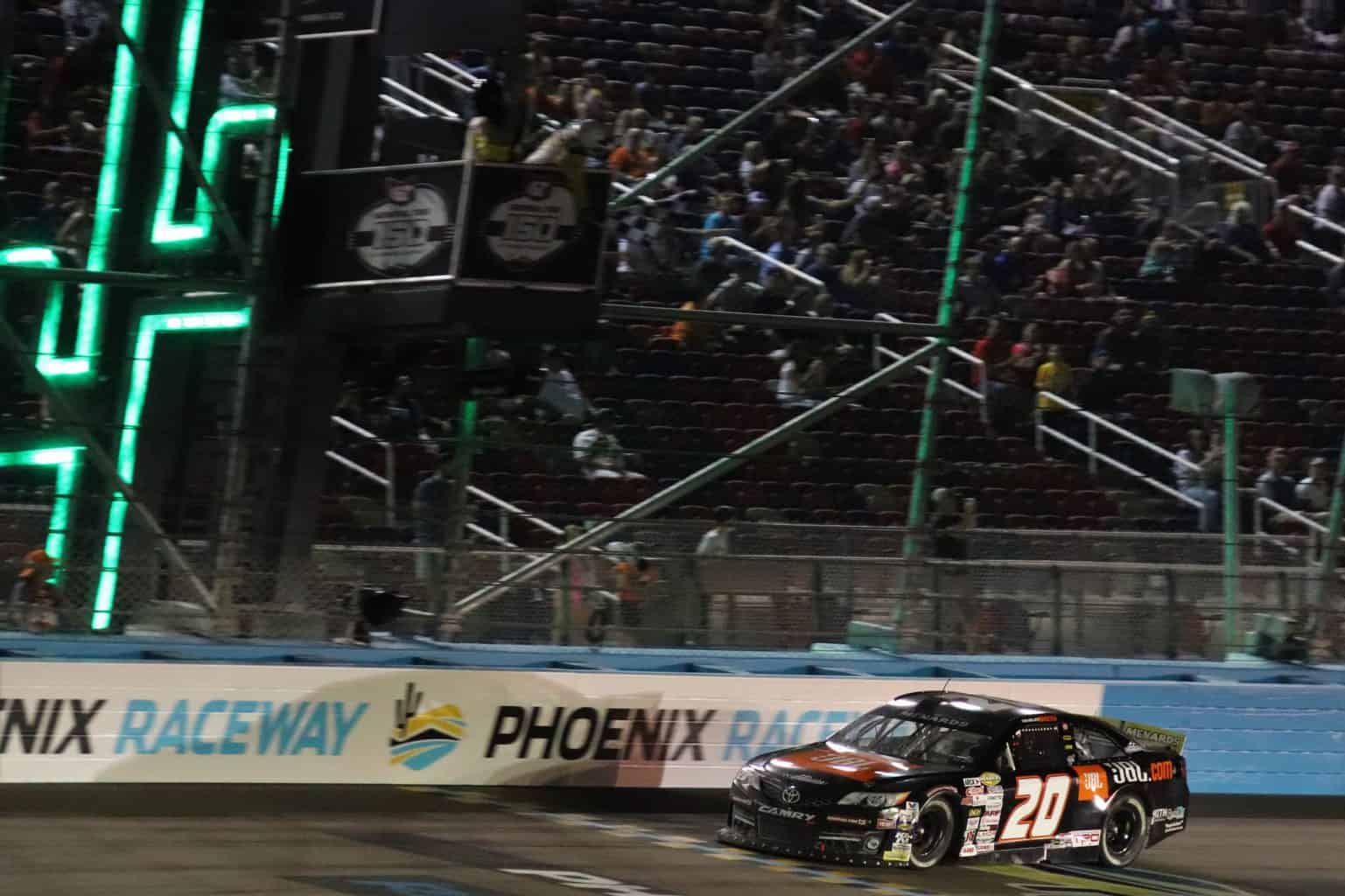 In a Nutshell: A disastrous ARCA night in America came to a merciful end when Chandler Smith held off a physical challenge from dominant Ty Gibbs on the lap 149 restart to win the General Tire 150 at Phoenix Raceway. The win was Smith’s first of 2020 and the eighth of his ARCA career. Michael Self, Gibbs, Tanner Gray and Zane Smith rounded out the top five.

While Smith’s win came on the back of some impressive driving, Gibbs was fighting back self-admitted tears of frustration after failing to win a race he controlled for nearly the entire night. Gibbs, however, saw his late-race strategy to pit for four tires after a lap 128 caution go up in smoke when ARCA officials allowed the yellow flag period to go for more than 10 laps after numerous drivers refused to lineup properly behind the pace car. It was a most egregious officiating error in a race that was marred by gaffes and crashes.

Self maintains the series points lead he held after his Daytona win last month with a runner-up finish, extending his points lead to 13 over Hailie Deegan, who finished seventh.

Friday night’s showing was not the Chandler Smith fans have seen dominate the ARCA short-track scene over the past two seasons but that’s not to diminish what he did to score the win. Despite both Gibbs and Self having a tire advantage on the final restart, Smith was able to pull away even after Gibbs got into his quarterpanel on the lap 149 restart, and proceeded to drive away from that despite being hounded by former Phoenix winner Self. It’s one thing to win races with a dominant car, but a great driver has to be able to steal them as well. Smith proved more than able.

It’s hard not to feel bad for Gibbs after this one, as he had by far the best car in the desert Friday. Leading the most laps by a wide margin, Gibbs’s team had a sound strategy to pit for four tires under the lap 128 caution. Previously, after pitting for four tires under a lap 52 yellow, Gibbs went from 11th to the lead in only two laps after the restart. However, a lengthy delay to restart the race after that caution, plus the yellow flying again on lap 143 after Drew Dollar and Jesse Love tangled, led Gibbs to play rough with Smith on the final restart, and come up short. It’s questionable whether Gibbs’s decision to make contact with Smith at the drop of the green was the correct one, but the speed he showed in Phoenix was not. Plus, I’m gonna give the kid credit for owning up to why he went Corey Hart during his post-race interview.

#arca and I had tears of frustration so I put my oakleys on. I’m not too cool btw

For all the attention his teammate at DGR-Crosley is getting, Gray has been showing some real speed turning left instead of going straight. Gray was a fixture in the top five all night long at Phoenix, only unlike his races at Daytona and New Smyrna last month, he finished there out west. The decision to put such an inexperienced driver in a Truck Series entry full-time will continue to look wiser every time Gray runs like he did Friday.

Just as Phoenix Raceway is a “complicated” oval, the story for Self and Deegan on Friday was just that. Self finished second and extended his points lead, and did so back on his home turf towards the West Coast. However, Self’s run back to second was a comeback, as his No. 25 car was nearly wrecked on a lap 37 restart when the car would not get up to speed – Zane Smith rear-ended him as a result – and again on lap 52 when Self got turned by Lawless Alan after his car cut out on him in a corner. Though his No. 25 team was able to isolate the problem and correct it, these same type of fluke mechanical gremlins literally cost Self enough points a year ago to win an ARCA title. The gremlins striking again only two races into the season is a real cause for concern for a title favorite.

As for Deegan, it can be argued she ran better than the seventh-place finish she posted, as she proved formidable on restarts early in the race. However, a poor restart late in the race marred her towards the back of the top 10. Further, she came into Friday’s race as one of only a few drivers in the field with experience at Phoenix Raceway. To not capitalize with a stronger finish at her most familiar track could prove costly.

Dollar endured damage in incidents with Howie DiSavino III and Tom Berte, but the fact remains he was about to be lapped in a Venturini Motorsports entry before the caution flew on lap 128. The night didn’t get better, however, when Dollar’s contact with Love on lap 143 brought out the final yellow and dropped the No. 15 to 14th in the final running order. Dollar won’t factor into the title chase with runs like Friday’s.

Speaking of Berte, who came out of retirement for the second time to run Friday’s race, his lap 116 incident that saw him make contact with both Dollar and Nick Sanchez was cringeworthy. Fortunately, the No. 12 pulled off the track soon afterwards.

Thad Moffitt brought out the yellow on lap 128 when he blew a left front tire and slammed into the turn 3 wall, arguably the hardest impact anyone endured at Phoenix.

Tim Richmond also endured hard contact with the wall, bringing out the race’s first yellow on lap 10 in an unfortunate incident for the Wayne Peterson Racing team. It was a short race for a team that defined the underdog operation, hauling all the way to Arizona in an open-air trailer.

It doesn’t get more grassroots than towing all the way out west with an open trailer and a conversion van #ARCA https://t.co/PO3qN9W7zq

It was bad enough that Sam Mayer ended up behind the wall with a punctured radiator after less than 95 laps, snapping a two-race ARCA win streak for the No. 21 team. But listening to his post-race interview, which essentially heard Mayer throw his GMS Racing team under a proverbial bus for bringing a “fourth-place car” to the track was painful. Though Mayer did tweet an apology to his team after Friday’s race, to listen to a teenager lecture a Truck Series championship-winning team about the need to bring better-prepared cars to the racetrack was the literal definition of ugly. But, it didn’t end up in the Ugly section of the Breakdown…

Because we saved this section for the totality of ineptitude that marked ARCA/NASCAR’s handling of Friday’s race.

The first ARCA race I ever covered was the 2010 Tire Kingdom 150 at the Palm Beach International Raceway. It was in many ways comparable to Friday’s race at Phoenix; three weeks after the season-opener at Daytona, it marked ARCA’s debut at a new track for the series, with the series enjoying momentum after a big-name female driver finished well at Daytona (remember 2010 was Danica Patrick’s debut).

And, just like the Palm Beach race, this Phoenix race was a momentum-killing disaster for the series. Palm Beach drew a crowd of maybe 100 people for a race that was run in a literal monsoon with a field of cars that saw Brad Smith driving a superspeedway car on a road course. That race was arguably less disastrous than what transpired at Phoenix. And that’s without delving into detail about just how God-awful the modified “live” pit stops looked on TV. Word of advice to ARCA… drop the “live” part of that. No one’s fooled.

Even before the green flag flew, it was a busch-league move by ARCA/NASCAR to allow cars with duplicate numbers to run a national-touring series level race. For one, it even confused the FOX broadcast booth… and if it’s confusing those in the racing industry, imagine what race fans that don’t follow ARCA (the very audience that the series is trying to capture by broadcasting races on FOX Sports 1) must have thought. And, for crying out loud, ARCA has been hosting Wayne Peterson Racing for decades, a team that for decades has mastered the art of using duct tape to change a car’s number.

Go figure that ARCA, moving races to a NASCAR/ISC-owned track, fell victim to inconsistent yellow flags. Lap 52 saw the yellow come out for Self spinning, making no contact with a wall, and pulling away in the time it took the flag to fly. Fast forward to lap 116, and Berte making contact with multiple cars in multiple grooves on the track didn’t.

Worst of all, the amount of caution laps run during a 150-mile race was enough to make the old Bristol Motor Speedway blush. Case in point, roughly 10 laps of caution elapsed between a lap 64 yellow when Gracie Trotter’s car stopped in turn 3 with a mechanical issue, and lap 75 when the race restarted. Even FOX’s David Rieff exclaimed “hey, we’re going to go green again” when this transpired. To make matters even worse (and this wasn’t mentioned on the telecast), even though caution had gone for 10 laps, ARCA opted to move a scheduled competition caution from lap 75 to lap 85, rather than counting that marathon yellow as the competition yellow.

ARCA has moved the competition caution from Lap 75 to Lap 85. @Cmcghee71 is restarting 16th at Lap 75#NASCAR #ARCA #GeneralTire150

Fans were only spared from that competition yellow due to DiSavino’s lap 79 wreck bringing out the caution flag.

Disaster was not averted a second time. As was previously mentioned, more than 10 laps of yellow elapsed from the caution for Moffitt’s blown tire to the lap 140 restart that saw Chandler Smith take the lead for good. The delay stemmed from multiple drivers refusing to line-up (the caution lights on the pace car went on and off multiple times during this yellow-flag period).

Not only was this frustrating from a viewer’s perspective, it literally altered the course of the race, leaving Gibbs and the fastest car in the field with limited laps to make their four-tire strategy work. ARCA’s unwillingness to use the black flag to get the field to comply with the tower was laughable, and degraded the integrity of their competition.

Gibbs called the end of Friday’s race “an embarrassment to the sport.” Enough said.

When the cars came to the line 4 abreast the race should have been stopped and the cars not in their proper place sent to the rear of the field. This kind of bush league bullshit I can see at local tracks. I expected more but I will pass on ARCA.

The Pit Reporters missed a great opportunity to have Kevin Reed show or describe what “debris” shorted the starter in the 25 car which caused all the havoc on restarts. Was it a lugnut, a preparation error, or what? Everyone running the ILMOR engine needs to know and take steps to prevent a re-occurrence, maybe even an ILMOR update for a non-conductive protective shield. For the good of all motorsports, this kind of info should be shared so young mechanics and short track racers learn from the episode…

Tom B
Reply to  OHMY

I agree. There are a lot of simple Q/A incidents that happen during a race that are never address. Too busy making stick/ball references, someones kids or pets and watching wives and mothers cheering on their love ones.