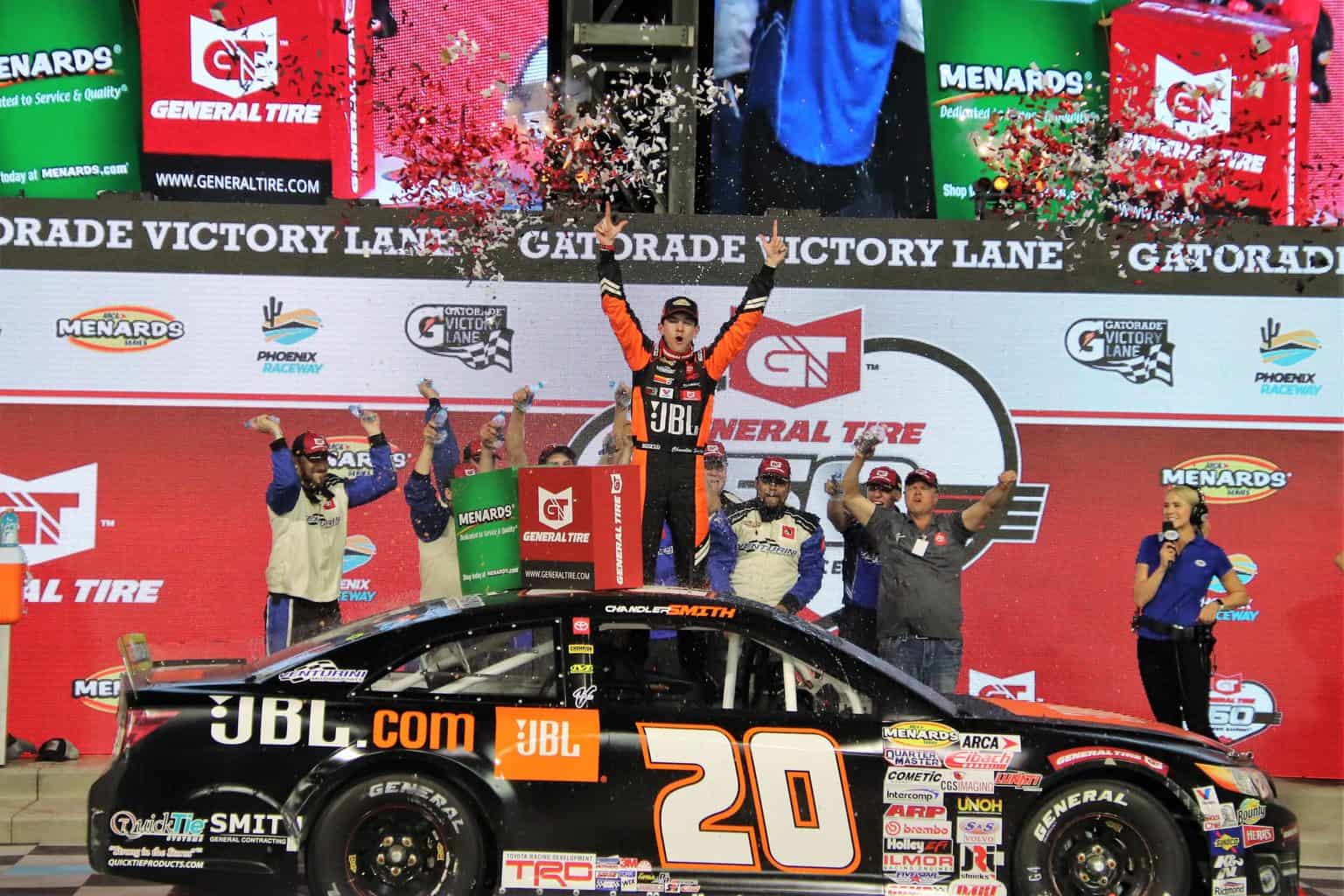 As a guest broadcaster for Fox Sports 1, reigning NASCAR Gander RV & Outdoors Truck Series champion Matt Crafton perfectly summarized Chandler Smith‘s win in the ARCA Menards Series race at Phoenix Raceway. “He didn’t have the fastest car, but he put it altogether there at the end.”

Smith took advantage of an overtime restart to win the 2020 General Tire 150, his first win of this season. It is his eighth career ARCA win in only 21 starts.

“Give it to this man right there (crew chief Billy Venturini),” Smith told Fox Sports 1 reporter Katie Osborne in victory lane. “If he wouldn’t have made that call, we wouldn’t have won the race. He made the gamble and it’s why we’re sitting here in victory lane. Billy [Venturini] gave me a tremendous handful tonight with this No. 20 Toyota and look where we ended up.”

Venturini was confident about Smith’s chances of winning the inaugural ARCA race at Phoenix Raceway. When asked about how he felt at the end of the race, he could laugh about his pre-race thoughts.

“I lied. We weren’t the best car tonight but we won,” he said. “There was at least one, maybe two [cars] better. If I gave him (Smith) track position, he’d be fine. He’s a race car. I put him in the lead and he won the race.”

The two drivers whom Venturini was referring to were Ty Gibbs and Michael Self. Gibbs won the pole for the race and by far dominated the race, leading 122 laps. However, on the overtime restart, he restarted on the outside and lost his chance for victory.

"How about this? Chandler Smith has just pulled off the upset!"

After the race, Gibbs repeatedly stated his frustrations, both with the outcome and likely the amount of caution flags which resulted in many laps being run under the yellow flag.

“I have no words to summarize it or I’ll get in trouble. That’s how frustrated I am right now,” he told Fox Sports 1. “I am very frustrated with how it was run. It was really embarrassing to this sport. I kicked their butts all day. When we got to the end, we got jacked but it’s racing. It sucks what happened at the end.”

The newness of sorts culminated with eight caution flags.

Some of the drivers involved in the caution flag periods were full-time ARCA drivers Tim Richmond and Drew Dollar, West series full-time driver Gio Scelzi and Jesse Love, among others.

At the end of the race, finishing runner-up was Self, who battled back from electrical issues early on. After the caution flag flew on lap 30, on the ensuing restart, Self failed to fire off and lost massive track position. Fortunately, an incident quickly occurred and Self came to pit road.

The team attempted to diagnose the problem, but were initially unable. On lap 52, as Self entered a corner, his No. 25 Toyota lost power and Lawless Alan bumped him, spinning Self and bringing out the caution. Finally, on that pit stop, Venturini Motorsports discovered the problem.

Kevin Reed, crew chief for Self, told Fox Sports 1, “We picked up some debris on the race track. It was actually shorting the starter out against the firewall. We come in to figure out what was going on, put two tires on it to get us to the break here to see where we’re at. But we were able to get the part out that was causing the problem.”

At lap 87, Sam Mayer, who won both the East and West series season openers, abruptly brought his No. 21 Chevrolet to pit road. GMS Racing found damage to the radiator and Mayer was unable to continue, a blow for the driver as he is competing for the Showdown title.

On lap 126, Thad Moffitt‘s No. 46 Ford blew a left front tire and he made hard contact into the wall. After the restart, Smith took the lead on lap 139, but Gibbs was reeling him in.

On lap 144, Dollar and Love made significant contact which resulted in the final yellow flag. On the restart, Gibbs lined up on the outside. When the green flag flew on the overtime attempt, Gibbs couldn’t regain the lead nor could he even finish second. He ended up third.

Unofficially, after two races, Self is the points leader. He leads Deegan by 13 points, Dollar by 21, Gray by 23 and Moffitt by 27.

Thank You Mark and thank you frontstretch.com. Your’s was the 1st to publish winner and the race story online… couldn’t get to a TV to watch. How did Deegan run? Read where she finished. Thanks again.

Wow! A naked display of angry rich kid entitlement. Spoiled rotten Gibbs needs to be taught humility and sportsmanship. This is the direction the “sport” of auto racing is going unfortunately. All this was amplified years ago when the powers to be promoted and threw money at the joke known as Danica Patrick. Sickening!

The same for young Sam Mayer. A top ARCA Team sent the kid out with a Yates K&N motor and the kid threw GMS under the cactus…What is their reasoning for bring a knife to a gunfight? The kid just pouted and failed to respect his Team and sponsor in the interview. Who is this kid’s PR handlers that didn’t prep him to be positive and ring the bells before whininga?

JD in NC
Reply to  Steven

It sounds like Ty Gibbs has been to the young Kyle Busch post race interview PR school. I bet the 18 car cost at least double that of the next fastest car in the field. I thought it was funny that it lost. Money buys speed, but not luck.

OHMY
Reply to  JD in NC

“…there’s no crying in baseball”… Coy Gibbs was right there with the Coach. If the grandson can’t give the interview without wearing his “Oakleys”, because he is crying, maybe he thinks more of his sunglasses than his Team. The Coach should make him stand up in front of his Team and ask for their forgiveness or he should go back to playing with his Hot Wheels…

The agony of defeat was well shown on Ty Gibbs interview. These racing teams are paying way to much to their PR people/handlers.
Did anyone notice the camera cut away a nano second just before Big Bill’s kiss to his winning driver? Thank you very much, seriously.