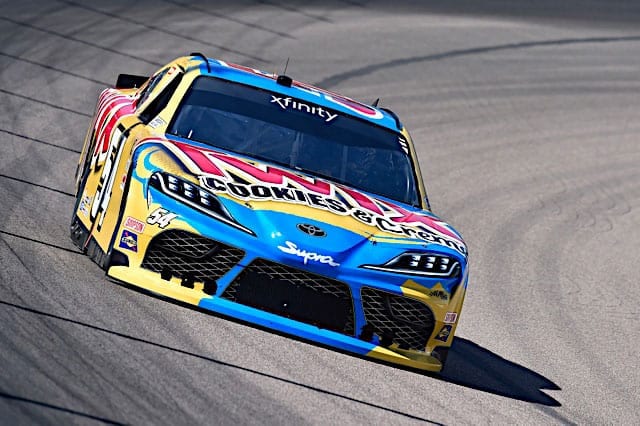 Chastain paced the field in the opening practice session with a speed of 130.610 mph, the only driver in either of the two practice sessions to surpass 130 mph. Chastain also posted the best 10 consecutive lap average.

Prior to turning laps at the 1-mile track, Noah Gragson was called to the NASCAR hauler. Xfinity Series Director Wayne Auton spoke with Gragson, who has been involved in rough driving incidents in the past two races. Gragson won the season opener at Daytona International Speedway. After the meeting, Gragson drove his No. 9 JR Motorsports Chevrolet for 21 laps in this session and climbed to ninth on the speed charts.

Thirty-six drivers completed a lap in this session.

In the second and final practice session, Busch completed 27 laps and his fourth lap put him atop the leaderboard. He wheeled his No. 54 Joe Gibbs Racing Toyota to a fast time of 129.510 mph. He too is making his first Xfinity Series start of this season.

The Xfinity Series will return to the track tomorrow for qualifying and the race. Qualifying will take place at 1:05 p.m. ET and the LS Tractor 200 is scheduled to begin at 4 p.m. ET. Fox Sports 1 will broadcast both events.