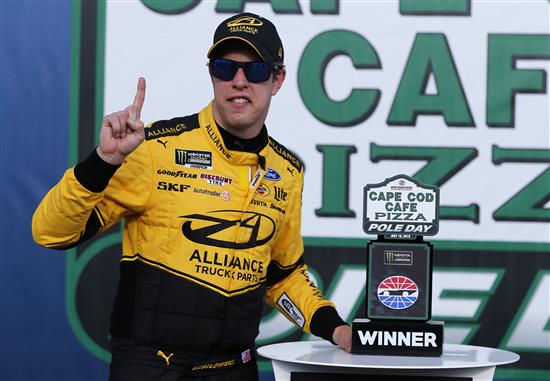 It’s time for a duel in the desert as the NASCAR Cup Series makes the trek to Arizona for the FanShield 500 at Phoenix Raceway.

Something is definitely different about the cars this week: the rear spoiler. It was reduced from 8 inches to 2.75 inches as part of the new short-track and road course package for 2020. In addition to the shorter spoiler, the front splitter will also be smaller to help create lower downforce. This, combined with higher horsepower, will affect the car’s handling and showcase more of the drivers’ talent.

There’s more laps in this race, 312, which means more opportunities to gain bonus DraftKings points. Remember, DraftKings awards a half a point for every lap a driver leads, as well as 0.25 points for each fastest lap. And don’t forget about place differential! Passing should be more feasible with this package, so check the qualifying results for any potential big movers.

Before I move on to this week’s picks, let me first review last week’s results from Auto Club Speedway.

Alex Bowman led 110 laps en route to his second career Cup Series win, while Ryan Blaney almost finished second. Instead, he was relegated to 19th after his tire corded in the closing laps.

This lineup earned $2 in the $1 Happy Hour tournament and the large single entry double-up contest.

In the past couple of years at Phoenix, Busch has either finished first or second. He also has nine consecutive top 10s, with just one outside fourth place. The No. 18 Joe Gibbs Racing driver has truly tamed the dessert course: he led 681 laps in this nine-race span.

However, he is a bit risky since his 2020 season started out rocky. Busch did finish second last week in Fontana, though, and earned 61 DraftKings points. His practice times reveal he still knows how to wheel his way around Phoenix, posting the second-fastest single lap time in Happy Hour. Look for him to lead early and often Sunday.

Keselowski has struggled a bit at this track, though he does have two top-fives and three top 10s in the past three years. You also might be turned away by the amount of laps he’s led recently. However, the No. 2 Team Penske pilot was second-quickest in 10-lap averages in final practice. His car has great long-run speed, which could be beneficial to you, should the race stay green. Unfortunately, the past few races have had a caution in the final few laps. Still, he should pull out a good day anyway.

The elder Busch brother hasn’t been as good here as Kyle, but he does have eight top 10s since 2013. Notably, Kurt Busch finished seventh last year after starting 16th. Additionally, he came in third behind Kyle Busch last week at Auto Club and had 11 fastest laps. Kurt had the fifth-quickest single-lap time in first practice and has fairly good long-run speed (10-lap speed averaged ninth in final practice). He’ll be one to watch on Sunday.

Although Buescher hasn’t performed as well at Phoenix in his eight starts, he has finished in the teens the past three races. At this price, it’s all about where he ends the race compared to where he begins. If he starts further back in the pack, he’ll have a good chance to take advantage of others’ misfortunes and finish well. This would translate to a good DraftKings score, which is precisely what he gave users in the Daytona 500 (58.5 DraftKings points) and the Pennzoil 400 (40).

Like Buescher, Dillon is my honorable mention due to his potential. For example, in 2017 he qualified 29th but ended a track-best 11th. That’s a large difference and definitely boosted his DraftKings score. Also, two weeks ago at Las Vegas Dillon scored 48.5 DraftKings points with his 10th-place finish. At just $6,200, that is really all you need from him. My only concern is he soared to the top early in final practice, which could indicate that he will qualify well. If he does, I’m not sure I want to roster him.

There’s a trend here with these drivers less than $7,000- place differential. Wallace earned a top 10 at Phoenix in 2018 after starting 30th. While those performances are definitely rare, he did pull off a similar feat at Las Vegas where he took advantage of a late-race restart and finished sixth. Now, this package will be much different, but it will give Wallace a chance to show off his driving skills. Hopefully, he won’t start near the front Sunday.