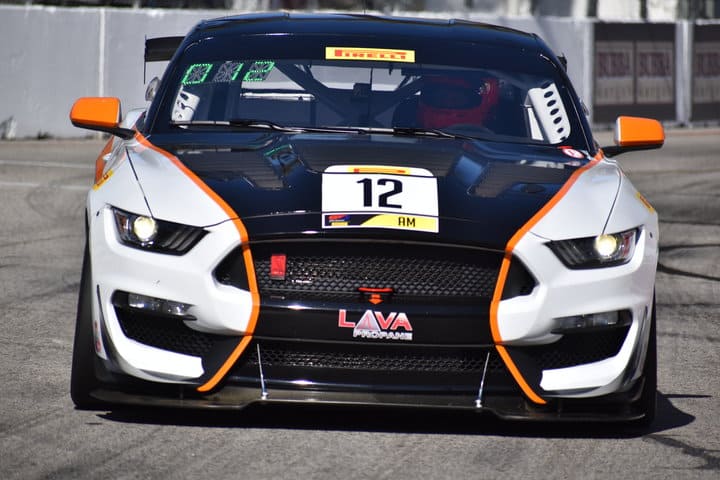 “To win one of these races is a real tough thing to do and we’ve been working on it for a long time,” Staveley said after the race.  “To win it like that is really something special.”

Staveley qualified on the pole, but he had the McLaren of Cooper right on his tail from the start.  Cooper was able to quickly take the lead on the first lap and desired to pull away.  However, Staveley was able to use the grunt of his Ford Mustang GT4 to keep up.

Staveley got a good run on Cooper off of Turn 20 at the end of the second lap and drafted up on Cooper.  At the top of the hill, Staveley made his move.  It was good enough to get the Mustang back up front.

Much of the rest of the race from that point on was a three-man race between Staveley, Cooper and The Racer’s Group’s Spencer Pumpelly.  The trio opened up a lead of over seven seconds over Andretti Autosport’s Jarret Andretti.

Eventually, Staveley pulled away to a three-second lead while Cooper fell back into the clutches of Pumpelly.  In the closing laps, Pumpelly was able to get past Cooper, but he could do nothing to prevent the Ford Performance Driving School instructor from claiming the win.

Staveley’s margin of victory was 2.296 seconds over Pumpelly.  Cooper was third, followed by Andretti.  Andretti was running fourth overall until the closing laps of the race.  Then, he was hit with a penalty for abusing track limits, a somewhat surprising call given how many drivers were getting all four wheels off of the track.  That dropped Andretti’s McLaren to sixth overall.  Classic BMW/Fast Track Racing’s Toby Grahovec was fifth in the Pro class.

In the Am class, much of the race was led by Paul Terry, who was making his Pirelli GT4 America Sprint debut for Rearden Racing after previously competing in TC America’s TC class.  The Aston Martin Vantage GT4 was quick and Terry drove up to fourth overall.  The similar Aston Martin of Flying Lizard Motorsports’ Michael Dinan gave chase.

The two ran together right up until the final couple of laps.  It was only at that point that Dinan was able to make the move on Terry to take the victory and fourth overall.  The margin of victory was roughly seven-eighths of a second over Terry.  Blackdog Speed Shop’s Tony Gaples was third, followed by Jeff Burton in the second Rearden Racing Aston Martin.  Jason Bell was fifth in the GMG Racing Porsche.

Race No. 2 is scheduled to go green at 4:10 p.m. Sunday afternoon.  The race will be streamed live at GT4-america.com.