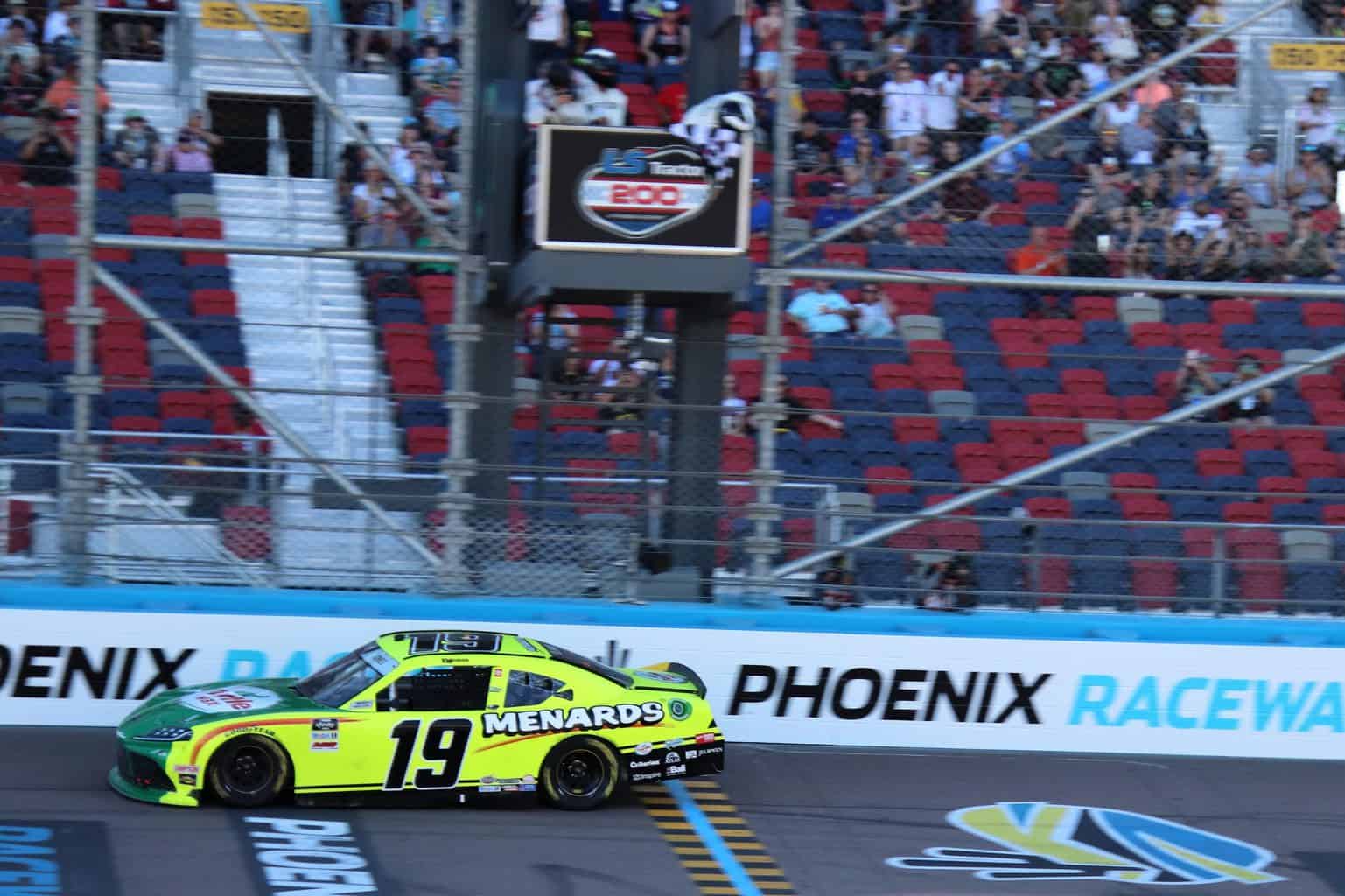 The NASCAR Xfinity Series concluded its west coast swing with the running of the LS Tractor 200 at Phoenix Raceway, the first short-track race of the season. And it produced an unexpected winner, who outperformed over the most decorated Xfinity Series driver to do so.

It seemed as though Kyle Busch would cruise to his 97th series victory, and his 12th victory at Phoenix Raceway. Busch led the most laps on the day at 78. But as the final stage progressed, his No. 54 Toyota Supra slowly started to lose strength, which allowed Joe Gibbs Racing teammate Brandon Jones to reel him in seemingly out of nowhere. Jones would make the pass down the backstretch with 20 laps to go and never look back in his No. 19 Toyota Supra.

Jones would claim his second career win by three seconds over Harrison Burton at the finish, solidifying a 1-2-3 performance for JGR, repeating the same feat they achieved in the Cup Series finale at Homestead-Miami Speedway last year. Jones led 24 laps in total.

The Good
The victory is Jones’ second in his 141st start, and the win moves him up to fourth in the Xfinity Series standings. The win also marks Toyota’s 500th victory between the top three NASCAR series as a manufacturer. Not a bad milestone victory for the Atlanta, GA native to have.

Harrison Burton and his No. 20 Joe Gibbs Racing team still continue to deliver in 2020. Burton was able to back up his first career win a week ago at Auto Club, passing Kyle Busch with a handful of laps to go to claim second, his fourth straight top-five finish to start the year. Not only that, but this also makes Burton the new Xfinity points leader by three points over Chase Briscoe.

The Bad
Justin Allgaier and the No. 7 JR Motorsports team swung for the fences on pit strategy, but the gamble did not pay off. Crew chief Jason Burdett made the call to leave the stage one winner out on the race track before the final stage in order to save their final set of tires for later in the race. But when Allgaier finally pitted for that final set, the number of cautions increased, which took away more time for Allgaier to catch back up to the leaders. Allgaier could only muster a 13th-place finish.

The Ugly
The beginning of Joe Graf Jr.’s rookie Xfinity season has not been a kind one. Graf was involved in a multi-car wreck on lap 142, plowing his No. 08 Chevrolet Camaro into his SS-Green Light Racing teammate, the No. 07 Chevrolet Camaro of Ray Black Jr., in turns one & two. It was undoubtedly an expensive incident for the team to behold. And for Graf to have three finishes outside the top-30 in four races is a disappointing start to 2020 for the New Jersey native.

Speaking of ugly, the first major physical altercation of the 2020 season took place after the checkered flag between Dillon Bassett and Brandon Brown. Racing inside the top 15 after a restart, the two drivers came together in turn three, making contact with the wall, and ruining what appeared to be a career day for Bassett. Brown finished 12th while Bassett finished 18th. As soon as Brown’s No. 68 Chevrolet Camaro came to a stop on pit road, Bassett started throwing jabs into the cockpit where Brown was still inside, with brother Ronnie Bassett Jr. also joining in, before NASCAR officials quickly separated them from Brown’s car. Another example of hot tempers being displayed in hot desert conditions at Phoenix.

Underdog Performance of the Race
It would be unusual to label Jeff Green as an underdog. The 2000 series champion has been out of the car since last July at Kentucky, missing the final half of the season due to rotator cuff surgery. He sat out Daytona after allowing Ross Chastain failed to qualify for Kaulig Racing and jumping into Green’s car at RSS Racing instead. But in his first race of the 2020 season, 20 years after his championship year, Green was able to bring his No. 93 Chevrolet Camaro to a 15th-place finish on the lead lap, and it is a good way for Green to come back onto the scene.

Quotable
On Toyota’s 500th NASCAR win: “Toyota is the manufacturer to be with, I love these guys so much, it’s like a family working with them.” – Brandon Jones

On his team’s pit strategy call: “I’m good with the decision. Obviously, it didn’t work out, and to say that I’m not disappointed would be lying to you. We had a fast, fast Camaro today. I thought we made the right call.” – Justin Allgaier

Final Word
With the 1-2-3 sweep by the Joe Gibbs Racing drivers of Jones, Burton, and Busch, it comes as no surprise that Phoenix Raceway is one of JGR and Toyota’s favorite playgrounds. Jones and Busch combined to lead 102 total laps on the day. Overall, on the Xfinity side, the team has 13 wins with four different drivers, and over 2,900 laps led. And on the Cup side, they have 6 wins with four different drivers, and over 2,400 laps led. All of which are hard stats to top, and the majority of other teams will be led to bring more than their A-game to beat JGR at this facility.

Up Next
With the west coast swing now in the books, Atlanta Motor Speedway in Hampton, GA will be the next destination on the Xfinity Series tour. The EchoPark 250 is scheduled to run on Saturday, March 14, at 4:00 p.m. EST on Fox Sports 1.