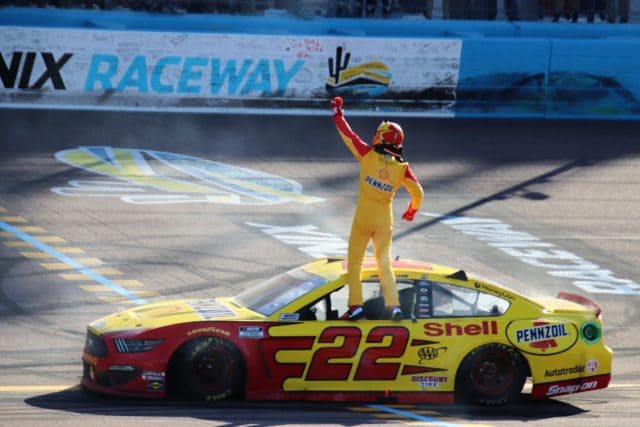 He had to endure a broken jack on pit road, a flurry of late-race cautions, wild restarts, and an overtime finish. But Joey Logano, in his No. 22 Team Penske Ford Mustang, holds off a fierce charge by Kevin Harvick on the final restart to take the victory in the Fan Shield 500 at Phoenix Raceway. The victory is the 25th of Logano’s NASCAR Cup Series career, and his second of 2020.

An incident between Ricky Stenhouse Jr. and John Hunter Nemechek set up an overtime finish. Logano and Harvick shared the front row with Kyle Busch and Kyle Larson behind them in row two. Larson sent his No. 42 Chevrolet Camaro down to the very bottom of the track below Logano and Harvick, but lost momentum out of the corner and fell back to fourth. The No. 4 Ford Mustang of Harvick tried to stay in Logano’s tracks, but fell back at the exit of turn two on the final lap, allowing Logano to pull away to the checkered flag.

After starting the race in 13th, Logano took the lead for good on lap 293 over stage two winner and teammate Brad Keselowski. Logano led 60 laps in total.

“Boy, we had more things go wrong today, unfortunate situation with the jack breaking, nobody’s fault,” Logano said in his front stretch interview after the race, “Had some good restarts to get ourselves back up there, being aggressive and having some tires there towards the end. I knew racing Kevin (Harvick) was going to be hard. I was figuring I was going to get hit, so I throttled up in the corner so much, I thought he was going to give me the bump‑and‑run, which I expected, wouldn’t blame him for. I’m out of breath.”

Logano continued, “That was a pretty intense last 30 minutes or hour of the race. A lot going on. Couldn’t be more proud of this team. Two wins already in the books. We’ve got to keep this thing rocking.”

Polesitter Chase Elliott, in his No. 9 Chevrolet Camaro, won the first stage and led a race-high 94 laps. He pitted under green flag conditions for a loose wheel in stage two, but recovered to finish seventh.

With the runner-up finish, Harvick leaves Phoenix as the new series points leader by a single point over Logano. He is the only driver to score top-10 finishes in all four races so far in 2020.

The top finisher amongst the Rookie-of-the-Year contenders was Custer, finishing a career-best ninth place in his No. 41 Ford Mustang for Stewart-Haas Racing.

The race had 12 caution flags for 73 laps, two for stage endings and 10 for on-track incidents. 20 lead changes were made between seven drivers.

Really like that aero package they ran in that race. Wish they would use that package for all races but not sure how a 2 in spoiler would work for the daytona/ talledega races but one thing for sure the drivers would have to back of the throttle and handling would be center stage again ever more so on the intermediate tracks Think this race was the best so far this year.

I gotta agree on this being a really good race. I loved seeing the tires fall off and seeing drivers having to manage tire wear. I also was impressed with the PJ1 and how that wore out and changed throughout the day. I’m always quick to criticize NASCAR but they put on a good show today.

This is essentially the 2018 package that was dominated by “the big 3” that most complained about and got us the high downforce package. I too am a fan of this type of racing but seems the more vocal group prefers high downforce pack racing.