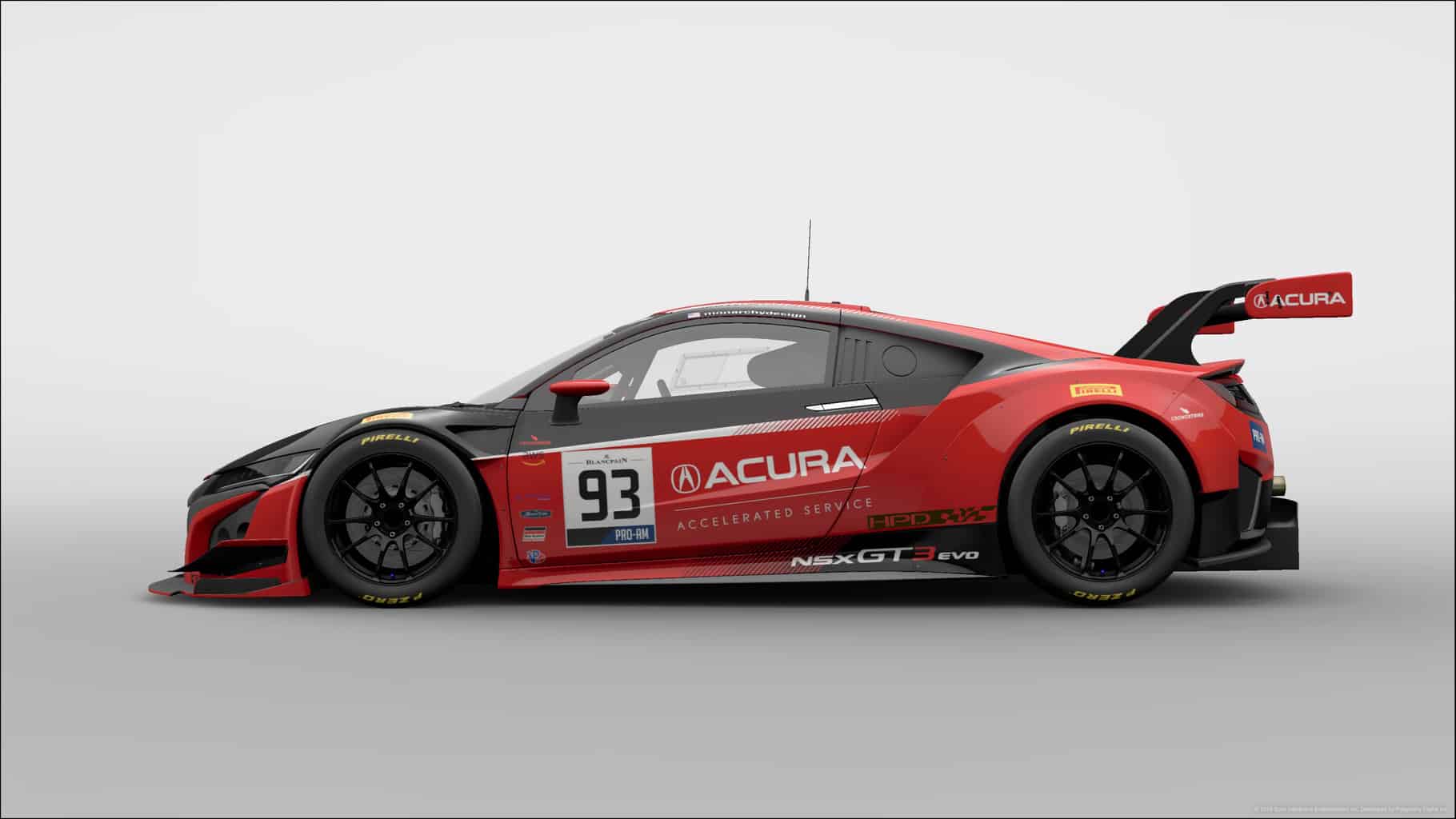 On the start, Hindman was able to take the advantage and pull away.  Teammate Kyle Marcelli followed in second.  Further back, TR3 Racing’s Matteo Cressoni and Vital Sport’s Paul Westphal gave chase.

Further back, K-PAX Racing’s Guy Cosmo and Stephen Cameron Racing’s Greg Liefooghe collided in turn 10, spinning out Liefooghe.  Both drivers were able to continue, but Liefooghe’s No. 87 BMW was damaged.  Liefooghe spent a number of laps in the pits getting repairs before returning.  He would eventually drop out of the event.

Hindman was able to expand his lead up to seven seconds in the first 40 minutes of the race before diving in to give way to Blackstock.  However, there was a delay getting the car back out onto the track.  That allowed the No. 80 Acura with Martin Barkey at the wheel to nearly jump Blackstock for the lead.

Just after the stops, David Ducote spun the Park Place Porsche into the gravel in the Esses to bring out the race’s first full course caution.  That closed up the pack.

On the restart, Trevor Baek spun after getting hit by K-PAX Racing’s Patrick Byrne.  The significant contact left Baek’s Ferrari effectively disabled in the middle of turn 1, bringing out a second caution.  Baek was ok, but he was out of the race.

The race restarted with under 18 minutes to go with a decimated.  Only nine cars were left by this point.

Blackstock was able to open up a gap, while a fierce battle erupted for second between Barkey, Squadra Corse’s Martin Fuentes and DXDT Racing’s George Kurtz.  Contact was made between Kurtz and Barkey which allowed Fuentes to get second-place.

A little more than half a lap later, Barkey had contact with Fred Poordad and spun the Wright Motorsports Porsche into GMG Racing’s James Sofronas.  The result of that was both Sofronas and Barkey were forced to make stops.  Ultimately, Blackstock was able to easily skirt along to the win.

Blackstock and Hindman’s margin of victory was 7.705 seconds over Fuentes and Rodrigo Baptista.  DXDT Racing’s Kurtz and Colin Braun were third in their Mercedes, followed by TR3 Racing’s Cressoni and Ziad Ghandour, despite a post-race time penalty.  David Askew and Ryan Dalziel were fifth in the second DXDT Racing Mercedes.  Barkey and Marcelli crossed the line sixth overall, but were penalized three spots to ninth after the race for what officials deemed to be avoidable contact.

In the Am class, Park Place Motorsports’ Alan Metni started from the pole and led early.  However, like on Saturday, Wright Motorsports’ Maxwell Root was the fastest man in the class.  It took only a couple of laps for Root to run down Metni and take the Am lead.

Then, the problems started.  Much like Chuck Bown in the 1991 Kroger 200 at Indianapolis Raceway Park, Root’s safety belts came loose.  This necessitated a pit stop so that he could get the belts back on.  Metni re-took the lead as a result.

Metni led until the mid-race pit stops.  Here, Wright Motorsports was able to retake the class lead with Poordad now in the car.  Ducote’s trip to the gravel put him a lap down.  That gave Poordad a clear route to the class victory, if he could make it to the end.

Then came the contact with Barkey in the Esses.  Poordad’s No. 20 Porsche was damaged in the incident, leading to Poordad nearly retiring the car.  He actually pulled off on the long straight after Turn 10 at one point, but chose to continue.  Following a pit stop for a tire change, Poordad was able to bring the battered Porsche home with the Am victory, two laps down on the overall leaders and one lap ahead of Ducote and Metni.

GT World Challenge America powered by AWS teams will take the next couple of months off.  The next race weekend is at Canadian Tire Motorsports Park May 16-17, as part of the Victoria Day SpeedFest.