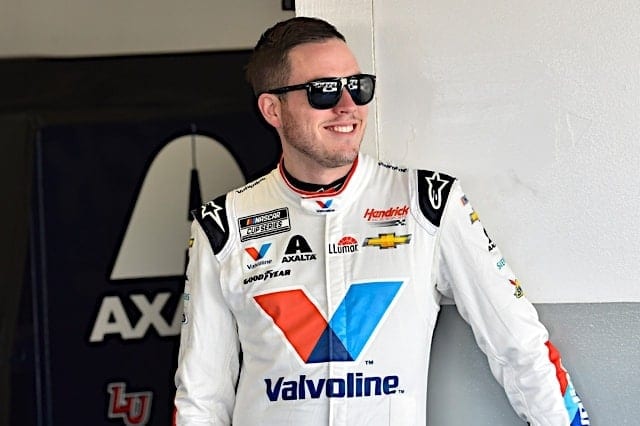 Last weekend was a busy one. You had the NASCAR Cup and Xfinity Series teams at Phoenix Raceway. SRO America opened its season at Circuit of the Americas and my niece Londyn turned six on Sunday. That meant that I spent most of the race at Dave & Busters. Today, we’ll focus on the FanShield 500k. A critique of the LS Tractor 200 and some Friday night shenanigans will run in the Frontstretch Newsletter on Thursday.

The primary feature of pre-race coverage was a sit-down interview Jeff Gordon conducted with Fontana winner Alex Bowman. This was a somewhat typical interview. Topics included how Bowman celebrated the win and how it will benefit him going forward.

Unlike a lot of NASCAR stars, Bowman hasn’t spent his whole career with top teams. Prior to his time with Hendrick Motorsports, Bowman spent a year with BK Racing, then a year at Tommy Baldwin Racing. Bowman apparently found out that he was fired out of the No. 7 while getting food at a Taco Bell. However, knowing that he somehow didn’t have an infield parking pass at Homestead at the end of 2015 should have been a sign. It’s not every day that a full-time Cup driver has to tram it into the infield.

Compared to last year, the FanShield 500k was a much more exciting race to watch. There was a good amount of racing for position that kept a lot of viewers occupied. Last fall’s race had only eight lead changes for the whole 500 kilometers. Sunday’s race had 20. If the season finale is anything like Sunday’s race, I think everyone will be happy.

Given the substantial rule changes that were in play this past weekend, you saw a lot more of Larry McReynolds than normal.  McReynolds explained the significant differences with the splitter and spoiler very well prior to the race, making use of the virtual studio. There were also virtual cutaway car pieces as well.

The use of Michael Waltrip this year on FOX continues to be a bit of a head-scratcher. During Sunday’s race, he spent time on Monument Hill, ate a monster hot dog with fans and served as a quasi-pit reporter, interviewing Chip Ganassi late in the race. That doesn’t include his weekly Grid Walk, which continues to add next to nothing to the broadcast.

Just what are they trying to do with Waltrip here? He still has his regular gig as an analyst for Gander RV & Outdoors Truck Series races on FOX Sports 1, and he’s been there for years. However, on Cup broadcasts, he has floundered since they killed the Hollywood Hotel. Is FOX trying to build him up as their Rutledge Wood? He doesn’t strike me as being as likable as Wood.

For what it’s worth, I thought he did just fine interviewing Ganassi Sunday. I just don’t understand why they tapped him to do it instead of one of the pit reporters.

Something I found interesting didn’t actually occur during the race. During the caution after Quin Houff blew up/crashed, FOX aired a piece where Mike Joy and Jeff Gordon were in the pace car on-track. I know this is going to sound strange, but you could see marbles coming off the tires on the pace car. That seems unusual. Don’t think I’ve ever seen that on a street car before.

Booth-wise, I found Joy and Gordon to be an alert duo Sunday for the most part. The amount of racing for position more or less caused Joy to miss his cue for a Crank It Up segment. On that topic, I get the point of it, but I was never particularly a fan. At least if something big happens, they’ll cut out of it.

Like we’ve seen for much of this season, they’re willing to take turns on the commentary. The only exception to that rule is if heck goes down, which happened quite a bit late in the race Sunday. There’s an understanding that if it happens, that takes precedence.

I’ve stated this already, but it’s a breath of fresh air. Auto racing, by nature, tends to be unpredictable. It’s nice for thoughts to be able to be expressed fully. When Darrell Waltrip was still in the booth, he had his own way of doing things and his own style, something that he had built up over 15+ years of work. Some of that was good, some wasn’t. With Darrell no longer in the picture, Gordon is finally getting that opportunity to grow. He doesn’t have to worry about being cut off by randomness.

I remember when Gordon had the guest analyst spot for a couple of NXS races in 2015, his final full-time season in Cup. I didn’t think he was all that great. Kevin Harvick and Brad Keselowski were better in the booth. Of the drivers that had guest roles that year, Gordon was mid-pack. That he’s finally able to develop puts a smile on my face.

The unfortunate side-effect of all the wrecking late in the race is that the race ran long by 20 minutes. As a result, post-race coverage was cut to the bone. Viewers got the customary two interviews with winner Joey Logano, along with an interview with Harvick. That was about it for FOX, because they had to leave to get to a repeat of The Simpsons that was joined in progress. However, given how long the race went over its window, there was a little more than a minute remaining in the episode when they cut to it. Jeepers. Knowing that it was a rerun (the new episode was at 8:00 p.m.) and that little time remained in the timeslot, it makes you wonder just what the point of that move was.

Given the action in Sunday’s 316-lap race, I would have liked to have more coverage. Unfortunately, that’s the way the cookie crumbles. Nothing explosive happened after the race like it did Saturday, though.

The coverage of the race gave a lot of time to the actual racing for position. The race up front was pretty much always in doubt, making for a fun time. Arguably, the focus became tighter as the race went on since the leaders were closer together in the last two stages.

That’s all for this week. Next weekend is another tripleheader, this time at Atlanta Motor Speedway. Cup teams will race 500 miles Sunday, while the Xfinity and Gander RV & Outdoors Truck Series teams will race Saturday. Formula 1 starts itsseason in Australia, while the ARCA Menards Series East will be in Pensacola, Fla. TV listings are in the Television tab above.

We will provide at minimum critiques of the Cup and Xfinity broadcasts from Atlanta for next week’s edition of Couch Potato Tuesday here on Frontstretch. The Critic’s Annex, as stated above, will cover Saturday’s LS Tractor 200 and Friday night’s General Tire 150. Next week’s Annex will cover either the Vet Tix/Camping World 200 for the trucks or NASCAR All In: Battle for Daytona, the new Motor Trend OnDemand series.

Michael Waltreip just seem to become even more irrelevant as time goes on. His pathetic parody of ‘Between Two Ferns” shows how desrperate he is to stay relevant. It ain’t working.

Mikey has always been irrelevant. The last time I thought he was amusing was back when the show Inside Winston Cup aired on Speed. Of course that was mostly because Ken Schrader made me laugh because of his interactions with MW.

I prefer the booth with only two people in it. As you said, DW ran his mouth all the time and JG had to defer to Jaws. It takes a bit of time to get used to the dynamic of not having someone who was going to interrupt every other word.

The networks should have Crank It Up for the whole event. It’s a lot more enjoyable to watch. But they need to put the scroll back up across the top of the screen.

Two in the booth is a major improvement in itself, and these two make a good team. Reaction to incidents was quick, and explanations of oddities (pit penalties and messups) was well done.

Good race and good coverage. I agree with everyone else that 2 has been better than 3 in the booth. I think it’s important to have 20 to 30 seconds of silence here and there. Especially when there isn’t much to say. It’s nice to just hear the cars (not necessarily “cranked up” though. I did notice that they were willing to show battles in the field if nothing much was happening up front. We’ve been asking for that for year…. if nothing is happening with the leaders than find us two drivers that are battling for position and show us that.

I have no desire to have a clown in any broadcast whether it’s Mikey Waltrip or Rutledge Wood (I have always wondered how the latter even got the gig,,, did he know someone? or bring a sponsor?). Seems all sports broadcasts have to throw in sappy human interest stories, they tug at the heart and numb the mind and annoy the hell out of fans that actually tune in to see the race/game. They can do all that they want in the pre and post race segments, just not DURING the race.

Also a big thumbs up to DoninAjax’s request to bring back the scrolling ticker at the top or bottom of the screen. It is easier to look at without having to take your eyes off of the main action on screen.

I do like Fox using 2 in the booth, but they use to much in car camera shots. There is to much screaming in the NBC booth.