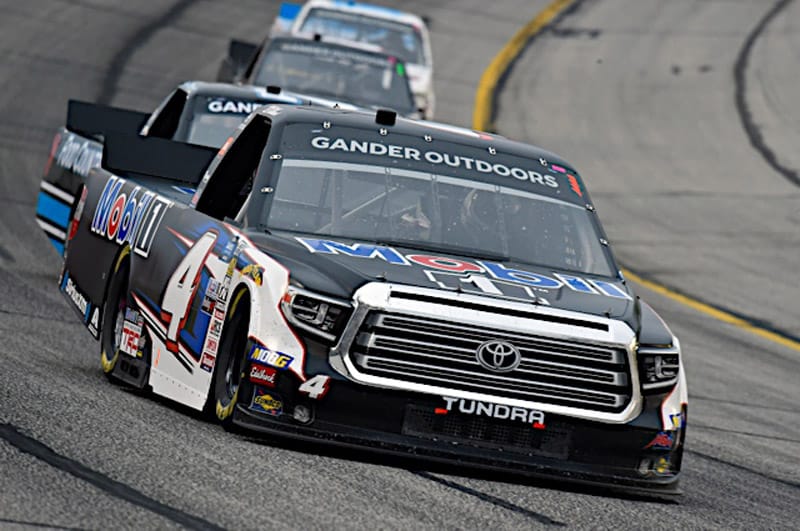 The NASCAR Gander RV & Outdoors Truck Series returns from its two-week break to take on Atlanta Motor Speedway, the division’s third race of the year.

38 trucks are currently entered, meaning six will go home unless there are any changes to the entry list.

The race will be run just a few hours prior to the NASCAR Xfinity Series event at the track, kicking off a full weekend of racing between all three series.

Grant Enfinger and Kyle Busch won the opening pair of races at Daytona International Speedway and Las Vegas Motor Speedway, respectively, and Busch will look to keep his win streak alive; he’s won every start he’s made dating to Pocono Raceway 2018, a streak of seven races. Busch will be in his self-owned No. 51 for Kyle Busch Motorsports.

Atlanta will also mark the beginning of the bounty hunt on Busch, a $100,000 reward for any NASCAR Cup Series driver who can beat the defending Cup champion in a Truck race. Chase Elliott will be the first challenger, driving the No. 24 Hooters Chevrolet Silverado for GMS Racing in this weekend’s event, along with John Hunter Nemechek and Brennan Poole.

Meanwhile, Ryan Truex returns to the Truck Series for the first time since 2017, driving Niece Motorsports’ No. 40, while Jeb Burton fills the seat of the team’s No. 44. Burton finished ninth in both of his starts last season, also in the No. 44.

Cup Series rookie John Hunter Nemechek will attempt his second race of 2020 in NEMCO Motorsports’ No. 8, having failed to qualify at Daytona. Fellow Cup rookie Brennan Poole will also attempt the race for On Point Motorsports, having driven its No. 30 truck in the first two races of the season. He’ll make the switch to its No. 29 machine.

Additionally, JJ Yeley makes his first Truck Series start since Bristol Motor Speedway in 2019, driving Reaume Brothers Racing’s No. 33. Josh Bilicki returns to the team’s No. 34 after piloting it at Las Vegas.

Clay Greenfield, who failed to qualify at Daytona, will attempt his second event of the season, and Stefan Parsons returns to CMI Motorsports’ No. 83 for a second straight race.