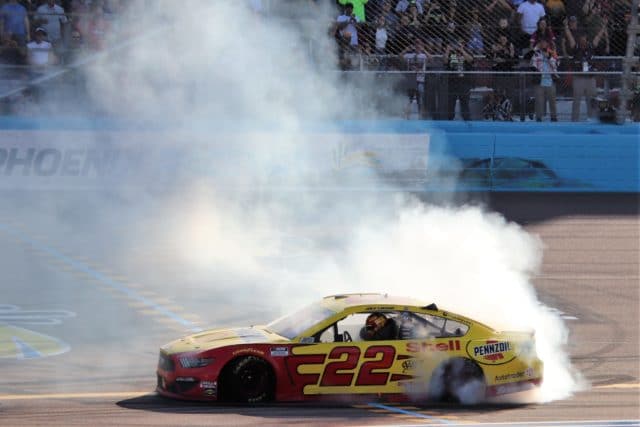 Joey Logano’s heart probably sank lower with each late restart. He had the best car in the late going, but he had Phoenix master Kevin Harvick to contend with on the final restarts, and Harvick’s car was fast on short runs. Logano is one of the best in the business at restarts, though, and he was able to get enough of a jump to hold off Harvick for the final two laps to take the checkers. Logano’s second win of 2020 matches his total for all of 2019 just four weeks in. If he can put together a consistent season like he did in 2018, look for him to be a threat in the playoffs. It’s still early, though, and the summer months will tell the tale for this team and anyone else looking for the Cup this year.

If Stewart-Haas Racing has been a tick off in 2020 so far, it didn’t show on Sunday.  While Harvick did get nipped at the finish for the win, the organization saw all four of its cars in the top 10.  Besides Harvick’s runner-up finish, Clint Bowyer gritted out a top five in fifth, Aric Almirola fought his way to eighth and rookie Cole Custer finished a solid ninth. SHR hasn’t shown the speed every week, but the short-track package definitely agrees with it. This weekend definitely gives the team some momentum and confidence heading into the rest of the spring races.

What… was the hidden gem in the weekend?

We’ll just leave this one right here, and be grateful that this photo op happened.

Look who I found. pic.twitter.com/FvBytHi0oS

Polesitter Chase Elliott looked like he could have every bit the dominant day his teammate had last week.  He posted the fastest lap of the race and led 93 laps, but a loose wheel forced an unscheduled stop.  Elliott lost a lap, and while he got it back late in stage two, he couldn’t quite make his way to the front again, finishing seventh. Elliott has struggled for good finishes at Phoenix recently, and from that standpoint, it was a decent day, but not what might have been.

Fall Phoenix winner Denny Hamlin made it clear early that he had a top-five car and was looking for another great finish, but instead found himself in trouble before the end of the first stage. Hamlin got aggressive on a restart, and got in just over his head, getting loose and tangling with Brad Keselowski, sliding up directly in front of Ryan Blaney who had nowhere to go but into Hamlin. Blaney’s day was ended along with Hamlin’s chances in the race. Hamlin went on to finish 20th in his damaged car.

All-time Phoenix win leader Harvick has nine wins on the one-miler in the desert, but he fell just short of number 10 this weekend. Logano got just enough of a jump on the final restart to assure that Harvick couldn’t put a bumper to him, though Harvick made no bones about trying.  He did score a stage one win and the playoff point that comes with that.

Last week’s winner and Arizona native Alex Bowman didn’t have a great day at his home track. He didn’t have a bad day either, running in the top 15 for much of the day and finishing 14th, and being in the center of the giant pinball machine on the last few restarts didn’t help his cause.

Sometimes you make your own luck, and sometimes you can’t buy any for any amount of money. Unfortunately for Blaney, it’s been the latter so far in 2020. His solid second-place finish in the Daytona 500 was marred by his role in Ryan Newman’s scary crash. Blaney holds no blame in that, but it made for a rough start to the year. Late tire issues in Las Vegas took him from a contender to 11th, and he finished 19th in Fontana following a late pit gamble after leading 54 laps. Blaney was running in the top 10 again at Phoenix when Hamlin couldn’t make the No.11 stick and was collected in the aftermath, finishing 37th.

The good news? Blaney has been fast every week, right along with his Team Penske Teammates. A contract extension announced this week secures his future and removes that pressure. When the luck turns around (and it will, because the No. 12 team is good enough to make it turn), Blaney will be right there in the thick of things.  He just has to ride this out and it’ll be okay.

Another week and all three manufacturers were represented in the top four. Thanks to the strong showing by Team Penske and Stewart-Haas Racing, Ford led the way with three top fives and five in the top 10. The rest of the top 10 was comprised of four Chevrolets and a Toyota. Again, good for the sport as a whole for this to continue.

Should Toyota worry, though?  After all, in last fall’s Phoenix race, the numbers were exactly flipped, with four Toyotas and a single Chevy in the top 10.

The answer is no. First of all, the ebb and flow among makes has always been a part of the sport, and Chevrolet has improved drastically this year.  But also, the performance at Phoenix wasn’t because the cars weren’t competitive. Behind Kyle Busch’s third-place finish,  Hamlin had a top-five car before his issues. Martin Truex Jr. worked his way forward from the back only to get caught in some on-track mayhem. Erik Jones and Christopher Bell also had problems. Next week, it could be someone else having bad luck. There’s no need to push the panic button here. There shouldn’t even be a panic button here.

How… are the standings looking after four races?

Yeah, yeah…this doesn’t mean much because it’s only four races.  Still, it’s not exactly the same picture from a year ago. Some things will change, absolutely. But it’s still an interesting look right now. The top three aren’t a huge surprise: Harvick, Logano and Elliott. But Bowman in fourth and Jimmie Johnson, who completely missed the playoffs last year, is fifth. Matt DiBenedetto is currently eighth (!) and while he has just one top 10, his average finish is an impressive 11.8. Chris Buescher is a solid 14th in the standings in his new Roush Fenway ride.

So while the luck will improve for some, like Truex and Kyle Busch, this has not started out as a typical year. Just like the manufacturer mix, this is only good for the sport.

And there’s a little of that mix all the way throughout. Corey LaJoie is ahead of two Richard Childress cars and Bell is currently trailing three drivers with fewer starts, including two who have run just one race. Until the playoff resets take it all away, it’s interesting to follow as trends form and develop.