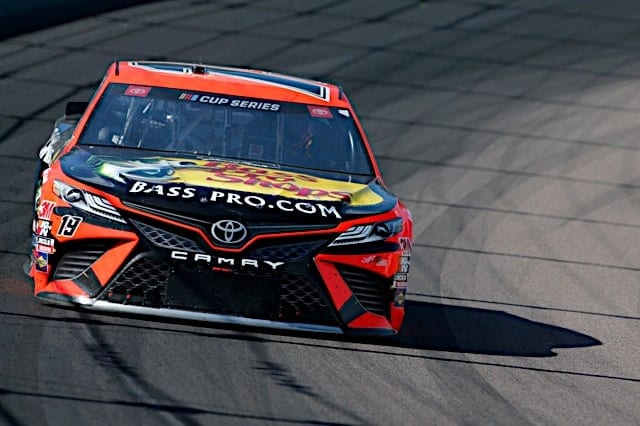 Phoenix Raceway was the center of attention of the weekend, as the next time NASCAR visits the Arizona desert a champion will be crowned. And after last year’s races, change was needed.

Over the offseason, NASCAR introduced the new short track aerodynamic package, which cut off more than five inches from the regular nine-inch rear spoiler. The track also laid down a heavy traction compound — or if you watched the broadcast, “awesome sauce” — that led to more lanes being utilized come race time.

But after 316 laps in the Cup Series race, many things stayed on course for the 2020 season. As for Saturday’s (March 7) Xfinity race, there were a few surprises along the way.

If I were to tell you Martin Truex Jr.‘s average finish through the first month of the NASCAR season was 24.5, would you believe me? I’m lying, right?

Unfortunately for the No. 19 team, Truex’s average finish is indeed 24.5, as he was the victim of a racing incident on Sunday.

On a lap 284 restart, Truex got ran into from behind — if you asked him, he got “ran over” — by Aric Almirola. In the process, Truex avoided Jimmie Johnson, but pounded the outside wall, relegating him to a 32nd-place finish.

The finish is Truex’s third finish of 20th or worse in the opening four races, with a best outing last week at Auto Club Speedway where he finished 14th. For you No. 19 fans, there’s no need to worry. Three out of four weeks, Truex has started in the rear of the field and raced through the pack quickly, only to run into tough luck late. The results aren’t indicative of how much speed the team has.

Harrison Burton won his first career Xfinity race last weekend at Fontana, so this week it was Brandon Jones‘ turn to show out, winning his second career race and second race of the season for JGR.

Dating back to Kansas Speedway last fall (eight races ago), Jones is the only driver to win two Xfinity races in that time frame. The No. 19 team is hitting on all eight cylinders to start the season, as it’s the second consecutive season the team is pretty much the same: driver, crew chief, pit crew.

THAT WAS AWESOME!
I have to give it to my 19 team! We’ve been strong all year and finally got the first 2020 win under our belt. Also how awesome to make @ToyotaRacing 500th win! This team is family and I’m so happy to be apart of it. #19rollin pic.twitter.com/powi5r7Qhz

For Jones, it’s all about the number two. He’s hoping it can be three come this weekend at Atlanta Motor Speedway.

If you look at all-time Xfinity Series greats, Jeff Green is an underrated name on that list. Sure, his success in the late 1990s and early 2000s is overshadowed by his willingness to start-and-park to make a living for the past decade, but if you put a competitive car underneath the crafty veteran, he can still get it done behind the wheel, even at 57 years old.

Because Green got out of the No. 38 at Daytona for Kaulig Racing’s Ross Chastain to race for points after failing to qualify, Green was assured he’d get another race this season that had not already been announced for his schedule. That race was Phoenix.

After starting 29th, Green methodically made his way through the field, taking the checkered flag in 15th. The finish was his best finish on a non-superspeedway track since September 2012 at Dover International Speedway, when he also finished 15th for TriStar Motorsports.

So many Thanks to my partners @C2Freight @TeamNightOwl62 and always @RSS383993 for the opportunity we did exactly what we set out to do top 15 and a car that we can get better for the next race thanks to all the guys had a blast! pic.twitter.com/7SryMj1py2

All the Gibbs girls will be just fine, the ebb and flow of NASCAR is on display right now. For those who think MARTY is frustrated, he is but he has always been a whiny beotch since he was in the kiddie series. Audio on
YouTube is there for all to hear. He whines more than most, and the entitled attitude is ever present. Good race, bad race, Cole Pears no Cole Pears, tis the nature of his beast. Oh well…onto the next race.