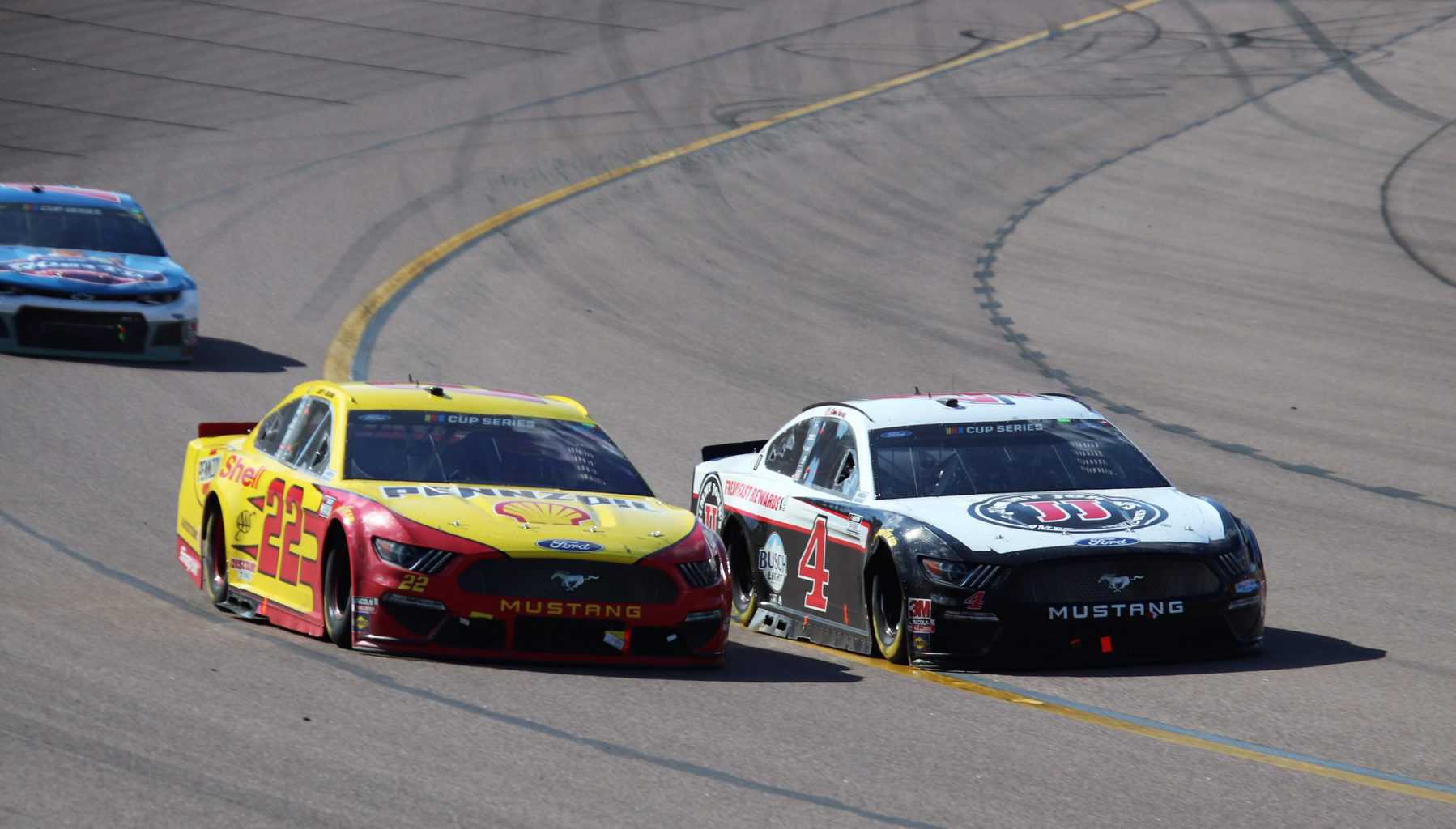 Kevin Harvick has a reputation for doing two things particularly well: closing out races and winning at Phoenix Raceway.  No driver has won more Cup Series races at the one mile oval than Harvick.  And, over the last decade or so, there is perhaps no other driver who has more frequently emerged out of the pack to snag improbable race wins.  Going back to his days at Richard Childress Racing, Harvick earned the nickname “The Closer” for his ability to finish highly-contested races with the checkered flag in hand.  Even on days when he did not have the best car, Harvick found ways to come out on top.

But in Sunday’s race at Phoenix, Joey Logano out-Harvicked Harvick.  On a day where Harvick had arguably the best car in the race, it was Logano who held off Harvick and Kyle Busch over a series of late race restarts to secure his second win of the season.  Despite never leading the race until lap 258 of 316, Logano outran Harvick in the late stages of the event, closing out a race that Harvick did not.

According to Harvick, Logano even did it with a slower car.

The pivotal restart that Harvick described occurred on lap 272.  During the prior caution period, both Harvick and Logano opted to pit for fresh tires.  Harvick won the race off pit road but was set to line up 10th after several drivers stayed out.  Meanwhile, Logano has a disastrous pit stop when the No. 22 team’s jack failed, causing him to lose valuable time.  Logano would line up 18th for the restart.

The following green flag run lasted only six laps before Chris Buescher’s crash brought out another caution.  But in that time, Logano had charged all the way back to the top 10.  When several of the front runners who had stayed out during the previous caution pitted, Logano was able to line up third for the next restart.  It took a few more laps for Logano to clear Brad Keselowski and take the top spot, but from that point on Logano never relinquished the lead.

All this time, Harvick was using the same pit strategy as Logano, and even started further forward in the field.  However, as Harvick described, the lap 272 restart made a big difference.  Since Logano was able to slice through the field more effectively, he got to the leaders more quickly than Harvick and was able to secure the top spot when it mattered most.

That said, Harvick’s postrace quote does not tell the whole story.  It is true that Logano had control of the race late, and that Harvick was unable to keep up with him by the time the No. 4 took second place.  But another caution for Ross Chastain’s spin with eight laps to go erased the deficit between them.  Harvick had a great opportunity to take the lead away on the following restart but couldn’t keep up with Logano.  Then, another crash on lap 310 set up a final, overtime restart.  Try as he might, Harvick could get no closer than Logano’s back bumper, and he lost too much ground on the final lap to try anything drastic.

In the end, Sunday’s race felt like one that Harvick should have been able to win.  Based on his own comment, he had a better car than Logano.  He also turned out to be on the correct pit strategy.  Given his reputation for closing and past excellence at Phoenix, it had all the signs of a Harvick win, what would have been his 50th in the Cup Series.  Yet Logano, who had no top fives in his previous six starts at Phoenix, closed out the race more effectively than Harvick, long after the lap 272 restart was over.

Now, obviously, one race should not completely destroy Harvick’s reputation as a closer.  There is a long way to go in the 2020 season and, despite losing the race, Harvick is on top of the standings by a single point over Logano.  And speaking of Logano, there were several races last year where the No. 22 team had a great shot to win but failed to close out the race themselves.  No driver at this level is going to close out every strong race with a win.

But what happened on Sunday should give Harvick and the No. 4 team food for thought.  Even when gifted with a few good opportunities, “The Closer” didn’t close.  If he and Logano both make deep playoffs runs this year, Harvick may find himself wishing that Sunday’s race wasn’t one that got away.

Thank You Bryan. You wrote perfectly what we saw and were “confused” (sarc) as to how Kevin saw things.
Nice to see a reporter from THE FRONTSTRETCH actually call it like it was. Most sugar coat their beloved favorites

We saw Logano out duel, out race whatever you wanna call it for 3 restarts, not one but three. He dominated Harvick and he had a total different view in the post race interview. I am glad you wrote the reality! We were watching his interview saying not nice things and applied common sense and facts that did not add up to Kevin’s versions of events.

As you stated this does not take away from him and his accomplishments! I didn’t even think about it that way. He just basically lied and refused to admit somebody got the better of him, not once but three times. He kinda brought the attention on himself. One race…yawn..but come on. It was obvious because some one dominated him at the end of the race, the excuse or whatever you wanna call it deserved to be called out. Bryan did a good job! The season is wide open anything can happen. Just so weird of Kevin to say what he said when the camera and our eyes saw him being beat 3 out of 3 restarts…and Logano had a good lead. Just weird. IMO