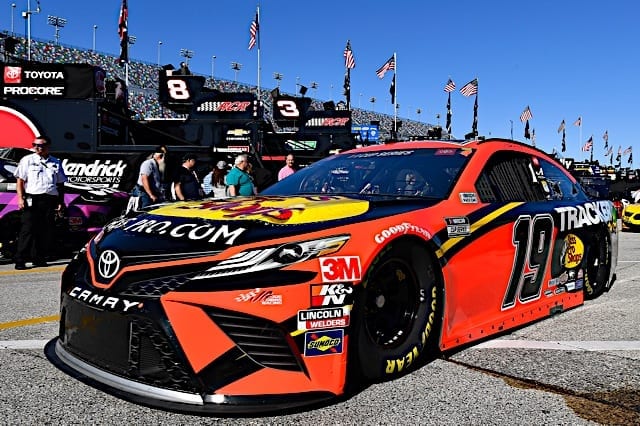 It is no secret that the Toyota teams have not been as strong as they would like to be to begin this season in the NASCAR Cup Series. Even though Denny Hamlin captured his third Daytona 500 victory, the other teams have seemed to lack speed throughout the first four weeks. We are used to seeing Toyota come out strong and dominate these races but this season has not been the case early on.

Is there reason to worry? Who will be the first one other than Hamlin to win? Have the other manufacturers caught up in 2020?

Jimmie Johnson is approaching the 100-race mark of his winless streak, something nobody could have predicted years ago. He has started off this season strong, though, as he sits fifth in the points as the series heads to Atlanta Motor Speedway this weekend. Johnson and all of Hendrick Motorsports have shown so far that they have the speed to win races this year, and it will not be long before he ends up back in the winner’s circle.

What is his best opportunity he will have to win? Will he actually get a win this season? Should we expect him to continue this strong start, or do you think he will fade as we approach the summer?

Q: Do you think Toyota is perfectly fine where they are, or do you think they need big improvements to keep up with the Fords and the Chevys right now? Bill W., Riverhead, NY

A: Toyota has been an interesting story through the first four weeks of the season. To go from dominating the series for multiple years, to being arguably the third-best manufacturer now is hard to fathom. This is also a year where we only have six in the series with the Joe Gibbs Racing drivers, rookie Christopher Bell with Leavine Family Racing and Daniel Suarez for Gaunt Brothers Racing.

While it is still early in the season, we have not been used to Toyota lacking any speed on any given weekend. The first two speedway weekends of the season with Las Vegas Motor Speedway and Auto Club Speedway, all the Toyotas seemed to struggle. The only exception was Martin Truex Jr., who had an excellent chance to finish up front if it were not for some bad luck.

Fast forward to this past weekend at Phoenix Raceway, and now we see the speed of all the teams again. Is this a different package thing, or did they just find speed? It is more than likely a little bit of both. While none of the drivers found victory lane, they all seemed to have their best speed of the season aside from Hamlin, who was caught up in an early-race incident. Truex, Erik Jones and Bell had some bad luck, but Kyle Busch was able to capture another solid finish. Suarez was as well, finishing just outside the top 20.

Hamlin has given Toyota a pep in their step with his Daytona 500 victory, and it is a matter of time before almost all of the drivers from the JGR stable find victory lane this season. The bottom line is there is nothing to worry about. The Toyota teams will be fine. They may have struggled to start the season, but we have seen this before. In 2017, we saw all the teams follow slump with a massive run in the summer months and start winning races in bunches. That could happen again this season.

Slow starts have been common for many of these drivers, but when they start winning, expect many. While the other manufacturers have seemed to catch up to them, they will still prove their worth soon. If you are a Toyota Racing fan, take a step back and realize we have the entire season to go. Things will be fine in the stable, that is a fact.

Q: With Jimmie Johnson having his losing streak extended to 99 races, where can you see him getting that next win? Will it break 100, or can he break it at Atlanta? Scott R., Memphis, TN

A: Johnson has started off the year better than he did the previous two seasons. There should not be any fear that he will not win a race this season, because this will be the year. 99 races is a long time since a last win, and I know Johnson is sick of hearing about it, too.

The facts are easy. Johnson has been excellent at so many tracks throughout his career, including Atlanta for this upcoming weekend. He is not a seven-time champion for no reason, he knows how to win. He has not forgotten how to win. A lot of bad luck has struck, and his cars have not been up to par in the last two and a half seasons to get the job done. However, with Hendrick Motorsports being as good as they have been to start off the season, that trend seems like it will continue.

Any driver in their last full-time season will always want to go out on top, especially a driver like Johnson. I do not doubt for a second that Rick Hendrick and that entire No. 48 team will not do all they can to make sure he has a successful season. They are going to go all out to win a race when they have the chance. Johnson seems to have that extra drive this year, knowing how badly he wants to get back in the winner’s circle.

From 2002-17, it was hard to imagine a topic of conversation like this about Johnson. When you win as much as he has, to go three years without one is pretty indescribable. This weekend will be one of his better chances to snap that winless streak. With five wins at Atlanta, it is one of his best tracks NASCAR visits. Do not be surprised to see him end competing for the win this weekend.

If it does not happen to be this weekend where he captures the win, there are many opportunities coming up where he will be among the top contenders. He has been very good at Texas Motor Speedway, which comes at the end of the month. However, there is one race where he will be quite possibly the favorite, especially with the low downforce package. That race is Dover International Speedway coming up in early May.

Johnson and Dover are like bread and butter, they just go so well together. Expect him to come out that weekend, if he does not already have a win, and be swinging. It is going to be exciting regardless to see what he does that weekend. He will be good for sure.

With Johnson being fifth in the points so far, this is already looking like a solid bounce-back year for him. He has not started off very well the last two years, but 2020 has been a different story, and for the better. He will be a driver to watch this weekend and beyond, and who knows, he could win when we least expect it. Do not be surprised, though, when it does happen.

I’m sure someone at Toyota will complain like last time, then they’ll start running up front again all of a sudden.

Personally I’d be just fine with Johnson not winning a race during his final season. The whole 7X champion thing is a joke anyway with the Chase format.