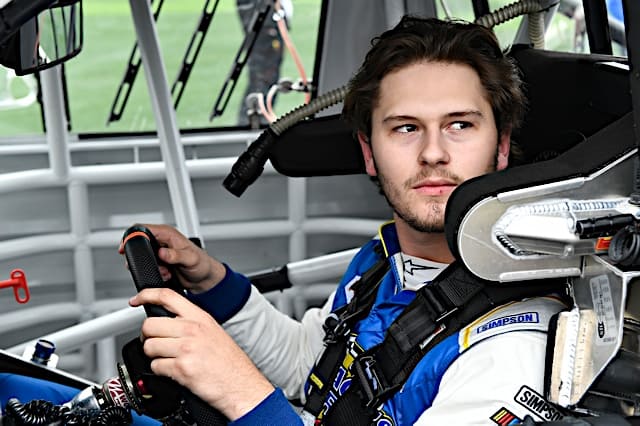 There may not have been a driver who received more criticism last season than Todd Gilliland, who failed to make the Gander RV & Outdoors Truck Series playoffs in Kyle Busch Motorsports equipment and went winless through his first 40 starts. He even had his then-boss Kyle Busch publicly chastise his performance on a few occasions.

But Gilliland finally broke through and won his first race late last season at Martinsville Speedway. On the cool-down lap of the Martinsville victory, Gilliland let his thoughts on Busch be known.

Audio proof of what the 4 radio was on the last lap#NASCARHall200 pic.twitter.com/7S527w04E8

“I thought we were never gonna win. You guys are the best. Kyle Busch, you can stay in your f#%ing motorhome,” Gilliland said on the radio transmission.

Needless to say, Gilliland did not return to KBM for 2020. But many assumed he would go to DGR-Crosley, a Truck team partially owned by Gilliland’s father, David.

MASSIE: TODD GILLILAND ON HIS FUTURE: ‘I JUST WANT TO RACE’

However, not too long before the season started, Front Row Motorsports, which the elder Gilliland formerly drove for in the NASCAR Cup Series, announced it was starting a Truck team and that the younger Gilliland would be the driver. Gilliland scored the team’s first top 10 in the most recent Truck race at Las Vegas Motor Speedway.

Frontstretch caught up with Gilliland to discuss his move to the new team, the relief of scoring his first win, his KBM struggles, how his relationship with Busch has developed over the past few months and the pros and cons of racing with an established last name.

Michael Massie, Frontstretch: What’s it been like moving to a new team?

Todd Gilliland: I think it’s always hard. Change is scary. But at the same time, sometimes you have to change to get better. I think you can learn certain things from everywhere. I learned so much at KBM. They operate probably like a Cup team, just the way they do things, go through the week and have their meetings and stuff. I feel like that has really helped me a bunch on how to approach a race weekend and just surrounding yourself with the right people.

Front Row Motorsports, Bob Jenkins, they just really believe in this program. To be able to start a whole new Truck team, I think that just really shows that they’re really involved with it. And I think that just makes you even more excited for this year — that everyone believes in it, and it’s just about going out there and winning races.

Massie: A lot of people assumed that you were just going to go run for your dad’s team, DGR-Crosley. How did this deal with Front Row come about?

Gilliland: I think that’s one thing my dad has done a really good job of is just keep all of his relationships open. From the whole time he ran Cup, even with Front Row Motorsports, he ran with them a lot of years. So he’s obviously very close with Bob Jenkins. Even some of the partners on our truck, Black’s Tire Service, he ran with them. The Love’s people, Speedco is going to be on our truck, too. Just keeping those relationships open, like I said.

I was right there with him growing up at the racetrack in their trailer. So I kind of went to them and told them the situation of this year that obviously, I needed to keep racing and keep learning and getting better. So they took a chance, and here we are. I’m super excited and super thankful.

Massie: Is it important, too, to align yourself with a team that has a Cup operation?

Gilliland: Absolutely. Like I said before, just the way things are operated, our run during the week, I think it makes a big difference. Also, finding people, we have an engineer from Front Row last year, he’s on Tanner’s [Gray] team, but with the alliance that we have [with DGR-Crosley], we work very closely together. So finding people is a little bit easier and just having that little bit extra resources to get to the track even better.

Massie: Front Row has been around in the Cup Series for a while, but the Truck operation is brand new How long do you think it will take everybody to get up to speed?

Gilliland: I think we all expect to be really fast … everywhere from here on out. We’ve had a long offseason to get everything ready. I think if anything, the first three races, or even the first two. … After that, either you have good momentum and you can keep going or that’s when you can regroup, restart and re-approach these races. You just got to go one race at a time. Although, I think we fully expect to be competitive from here on out.

Massie: How much did the win at Martinsville last year ease the pressure on you?

Gilliland: It did a tiny bit, but really there’s so much pressure. This is probably the most important year of my racing career to this point. Like I said though, I’ve learned so much. I think that really helps me to be able to get to that level every week. Once you’ve been there, it’s way easier to stay there. I think we got a great team behind me and great people to be able to go out and do that.

Massie: How does this team compare to Kyle Busch Motorsports?

Gilliland: It’s a lot different. Last year, going through some crew chief swaps halfway through the season, working with three different people. It’s a little bit different, but I feel like we’ve built a really great team. That’s one of the things that was cool for me to see was through the offseason, actually going out and getting pretty much each and every one of these people individually. It’s really cool to see the process behind that. It just makes me appreciate it more.

Looking back, there’s definitely some really, really smart people at KBM that I didn’t quite realize when I was there. But I think we’ve got a great team here.

Massie: When did you kind of realize things weren’t going to work out at KBM?

Gilliland: I don’t know. I was trying to make it work the whole time. That’s the thing, I never gave up, like the whole time, all the way to Homestead last November. It’s all you can do. You can’t ever give up. You can’t ever think that way because then it will just go away faster. So I just continued to work as hard as we could and tried to keep everyone working just as hard. But I think it is a little bit refreshing for everyone just to see some different faces.

It’s kind of weird to walk in here. That’s the only Truck team I’ve ever been to some of these racetracks with. It is kind of nerve-wracking, but you just can’t give up.

Massie: Was there any one thing you could put your finger on for why things just didn’t seem to gel last year?

Gilliland: No, it was just a bunch of little things. I think it makes it super hard when you’re super close to winning races and then you don’t get there. That’s really hard on the team. It’s hard on me, but I feel like I kind of got over it pretty fast. It’s hard for those guys. They get to that position and then it’s taken away from them like that, it’s hard for them to get back up and go. I think that’s the biggest thing.

Massie: Have you and Kyle Busch talked in the past couple months?

Gilliland: Yeah, we actually probably talked more after Martinsville on than we did the whole beginning of the season.

Massie: Why did you guys talk more after that?

Gilliland: I don’t know. We were just talking more at the racetrack and stuff.

Massie: How much of the criticism you received last year was due to your last name and the expectations set by being a third-generation driver?

Gilliland: I think it’s just expectations from everyone. Maybe a little bit of that. From KBM, everyone has seen the people that have come through there and the results that have come through there also. Just when you step through those doors, you’re expected to win and compete every week. And when we weren’t able to do that, I think, for good reason, people were doubting us. But you can’t fault anyone for doing that.

Massie: Would it be easier to enter racing as an unknown or does it help having an established name?

Massie: Are we going to see you start testing the waters of that Cup car a little bit now that you’re with this team?

Gilliland: I hope so. I wish, but definitely no plans of that. They’ve got great drivers over there, and I’m just trying to do my best over there.