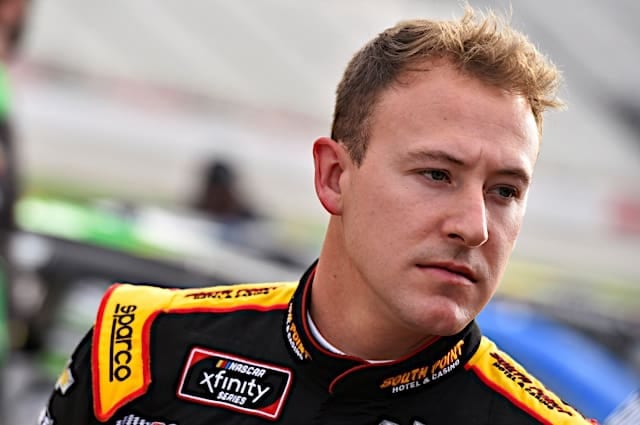 It’s been a rough start to the 2020 season for Daniel Hemric who signed a 21-race deal with JR Motorsports to drive the No. 8 car in the NASCAR Xfinity Series this season. Many thought the deal was going to prove that Hemric can get the job done in the right equipment. So far, it hasn’t happened. Hemric has struggled in his first three starts, taking two DNFs and a modest seventh-place finish at Auto Club Speedway.

This slow start comes off a season where Hemric won the Rookie of the Year Award in the Cup Series. But he finished a disappointing 25th in the standings driving the No. 8 car for Richard Childress Racing and was replaced by Tyler Reddick. With the JR Motorsports deal in his pocket, things were looking up for Hemric.

However, after Saturday, in which a late-race incident derailed him to a 30th-place finish, Hemric took to Twitter to express his frustration about the event and the last 14 months in general.

“Been on a downhill spiral for the past 14 months…made more mistakes in that time frame than I have in the entire time I have driven a race car,” Hemric tweeted, before later deleting it. “Yes, I try to stay positive all this time but this is getting unbearable. Can’t sugar coat it anymore. Terrible all weekend.”

While there is still a long way to go in the NASCAR season, the tweet makes you wonder if Hemric’s career in NASCAR is in trouble. That’s our topic for this week’s 2-Headed Monster. What do you think – Is Daniel Hemric’s NASCAR future in trouble?  Hereʻs what writers Adam Cheek and Mark Kristl think about it and let us know what you think in the comment section below:

Hemric’s Career is at a Crossroads

Hemric’s career in NASCAR is at a crossroads, and without at least one win in the Xfinity Series this season, his it will be in trouble.

While I do not believe winning in a racing series is a prerequisite for moving up the ladder, for Hemric, it is his biggest weakness. He has failed to win any races in the NASCAR Cup, Xfinity or Gander RV & Outdoors Truck Series.

In 2015 and 2016, Hemric competed full-time in the Truck Series. Over those two seasons, he achieved 15 top-five finishes, but only two runner-up finishes. Additionally, he only led 137 laps. Part-time drivers Kyle Busch, Daniel Suarez and Kyle Larson all led more laps than Hemric. Yet when Hemric moved to the Xfinity Series, he stopped competing in the Trucks, albeit with a lone start in 2018.

Was he ready for a Xfinity Series ride? There was a case to be made for that. He noticeably improved during his two full-time seasons, accruing more top fives, top 10s, poles, and laps led. However, Hemric again failed to win a race.

Over the final 10 races of the 2018 Xfinity season, Hemric nabbed eight top 10s, including two second-place finishes. In eight of those races, he led at least one lap.

Once he reached the Championship 4 round at Homestead-Miami Speedway, his shortcomings came to light. Of the Championship 4 drivers, Hemric was the only one who failed to lead laps. While he finished in fourth place in the race and third place overall in the championship standings, he still had not won.

The other three Championship 4 drivers were Tyler Reddick, Cole Custer and Christopher Bell and their respective successes pressured their current Cup Series team owner to move them into a Cup Series ride this season.

Hemric did not receive his Cup Series ride at Richard Childress Racing merely because of his on-track performance. Ryan Newman left the No. 31 Chevrolet and opened a seat. Hemric was the team’s Xfinity Series driver and he had a legitimate case to race in the Cup Series. After all, he did make the Championship 4.

Unfortunately, he struggled mightily in the Cup Series. He only finished on the lead lap in 25% of the races – nine out of 36. His lone top-five finish came at Talladega Superspeedway, a track known for unpredictability.

Worse, Hemric did not compete in any Xfinity Series races to either accrue track time or, at minimum, gain confidence. To add to his troubles, Reddick won the Xfinity Series championship, becoming a back-to-back champion. With Hemric under-performing and Reddick being touted for a Cup Series ride, Richard Childress chose Reddick to replace Hemric as the driver of the No. 8 Chevrolet.

Hemric won the Cup Series Rookie of the Year Award, and it likely made him a little bit more attractive as an option for Dale Earnhardt Jr. to hire to drive his No. 8 Chevrolet.

His career is at a crossroads, though. He is 29 years old, older than any of the Cup Series rookies this season.

Hemric is not competing full-time in 2020, so he does not have the option of being able to boast of making the playoffs or advancing through the various rounds. As a result, he has one goal for this season: win.

If he fails to win, he still could end up like Justin Allgaier in the Xfinity Series and Matt Crafton in the Truck Series. Both drivers are known for their success in their respective series, with no indications either wants to compete in the Cup Series.

However, for the reigning Cup Series Rookie of the Year driver, is that what he wants? He has brought backing with him to JR Motorsports. Most likely though, Hemric wants to win and attain another opportunity to compete full-time in the Cup Series.

Two of the Xfinity Series winners this season are both younger than Hemric and rising prospects. Noah Gragson is Hemric’s teammate and Harrison Burton is young and boasts a familiar surname.

This upcoming NASCAR silly season is predicted to feature many changes. If Hemric does not win at least once this season, there will be drivers such as the Drivers Edge Development drivers in the Truck Series who are younger, have won races, and will bring money to JR Motorsports. Given the option, Earnhardt Jr. may opt for that driver in favor of Hemric to drive the No. 8 Chevrolet in 2021. – Mark Kristl

Hold Out for Hemric

It’s a little too early to panic about Daniel Hemric.

The 2020 season marks the North Carolinian’s eighth in NASCAR in one capacity or another, and in that time he has racked up 72 top-10 finishes across all three major series.

While, yes, the zeroes in the win columns are a glaring absence from his statistics, he has proven to be a consistent, reliable driver throughout his career. In his two full-time NASCAR Truck Series seasons, Hemric only failed to finish in two of his 46 starts, scoring double-digit top-10 finishes in both years.

In the next two years, when Hemric jumped to the Xfinity Series, he finished second five times and had 40 top-10 finishes, 23 of those in the top five.

As far as points are concerned, Hemric improved every single season in NASCAR’s lower divisions – in trucks, seventh in 2015 and sixth in 2016. For the Xfinity Series, fourth in 2017 and third in 2018 – making the Championship 4 both years.

That win column remains stuck at zero, however – whether Hemric just had a bad day, suffered mechanical issues or there was one car slightly better, victory lane simply eludes him.

He admittedly struggled in his first Cup season in 2019, only managing two top-10 results and finishing 25th in the points. That’s arguably due to both adjustment to top-tier equipment and the cars themselves – Richard Childress Racing isn’t necessarily in the top echelon of NASCAR equipment at the Cup level.

The news broke in the latter part of 2019 that Hemric would be released by RCR, tossing him into the maelstrom of silly season and ride-searching. He landed one – albeit not full-time, but still an opportunity to race. He’s clearly a desirable talent and one that has the potential to deliver given the right set of circumstances.

He was running fourth at Las Vegas when his suspension gave out and went on to start fourth and finish seventh at Fontana. Hemric was also running around the top 10 at Phoenix when a late spin and resulting damage derailed his day.

So is it just bad luck? It could be, and I’m inclined to say that’s the most likely culprit. JR Motorsports cars typically run well, so I’m not willing to blame it on the driver or the car.

It’s also possible he’s simply adjusting to the equipment. Hemric is currently piloting the No. 8 machine for JR Motorsports, which is a solid car – it finished in the top 10 in 23 of 33 races in 2018.

The top-10 finish at Fontana was promising, as were the strong runs at Vegas and Phoenix before issues out of Hemric’s control foiled them.

The combination of the No. 8 Chevrolet and Daniel Hemric will bring results and maybe a win or two, for sure. Patience is a virtue. Give him time.

So, to paraphrase-quote Adam Sandler’s Howard Ratner in last year’s Uncut Gems … give him another shot. – Adam Cheek

I’m more worried about his coffee shop future! Trevor might not want to hire him.

He is the same age as Logano and will be spit out. He is goner. Do I have the magic 8 ball, no. Just a student of the ruthless business of teams. Sorry, just a fact. Justin A. at least won in the kiddie series was hyped as hell for CUP, he bombed (predictably) despite the hype and build up. He went back to the kiddie series and at least has his mug on camera and the car every race. This guy, ah no! IMO. Best of luck to his bread winning ways. Whatever it takes…..

Agree he is a goner. A shame because he was every bit as successful as Christopher Bell and Eric Jones whenever he ran the Super Lates. In this series however, he is almost as snake bitten as his alter ego – Ty Majeski, who too, can’t get out of his own way. Such a shame…

Daniel harmic I am a fan of yours now though

Hang in there young man. Lots of drivers have their down races. You have a lot of fans that will be behind you no matter what. But Jr is a good team to show your skills, which we know you will.