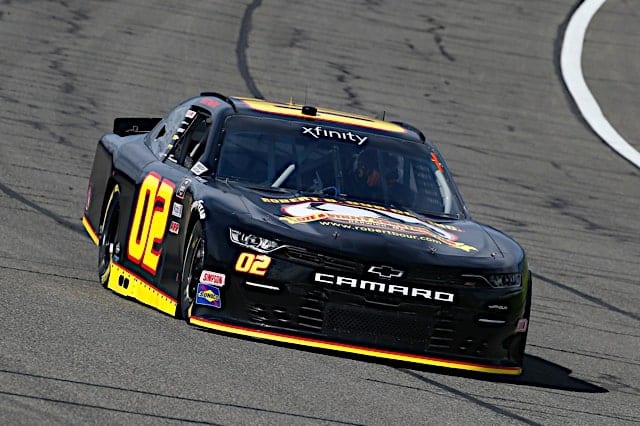 Last October, Our Motorsports made a bit of a surprising announcement when the team declared it was moving to the Xfinity Series full-time for the 2020 season while still running a partial ARCA Menards Series schedule.

Chris Our, owner of Our Motorsports, has never fielded more than six cars in any ARCA season since the team came into existence in 2016. Andy Seuss, competition director of the team, has been the driver in 11 of the teamʻs 16 ARCA starts, placing a career-best second at Talladega Superspeedway in 2017. In addition to running to ARCA, Seuss has a multitude of racing knowledge, as he’s made his living on the NASCAR Whelen Modified Tour, dating back to 2006.

Completely foregoing the Gander Outdoors RV & Truck Series and moving straight to Xfinity is a gigantic jump. But according to Seuss, the thought of jumping to the series has been on the team’s radar for some time.

“We were looking to move up,” Seuss recently told Frontstretch. “We looked at the Truck Series and obviously they have the same engine package as the ARCA cars, so that would have been a little easier equipment-wise. One of them was the opportunity to buy these cars and the ability to work closely with GMS [Racing]. All of the stars aligned and it happened.”

The team’s shop is located in Statesville, N.C., where the team has six full-time employees working on four GMS chassis. As its rookie year continues, the plan is to eventually acquire more cars and more bodies to build a complete team.

Prior to Daytona, all hands were on deck to even make it to the season opener. After all, the team didn’t receive its first chassis until one month into the offseason.

“We didn’t even have the cars until middle of December,” Seuss added. “We had one car that we made the announcement with and were looking for parts at that point. As it comes along, you have to adapt and get under the gun and go harder, harder, harder.”

Because Seuss is the competition director, he’s in charge of running the day-to-day operations of the team. He says that’s a position he’s never been in before during his racing career, though he ran for his family-operated team for much of his racing career in modifieds.

“I’ve obviously got great help in every aspect now as the team grows,” Seuess said. “I’ve done the buying of the parts and the decision of how many can we buy, how much money should we spend in that area.”

In a way, Seuss believes working in the service department of his parents’ boat shop has helped prepare him to run a race team, in terms of dealing with people, parts and jobs.

Being in charge of the ins and outs of the team means Seuss needs to be prepared at all costs, which includes the hauler. After leaving for Daytona in early February, the No. 02 team hauler didn’t return to North Carolina until this week, and then it is off to Atlanta.

The grueling schedule, Seuss believes, will be the toughest part for the young team.

“The ARCA schedule is a lot more laid back and we’ve never done it full-time,” Seuss said. “That’s going to be the biggest thing, is having things right.

“There’s a lot of stuff going on. Getting used to everybody. Being prepared is a big thing and having incredible plans and backup plans as things go along.”

Before Daytona, 2018 Truck Series champion Brett Moffitt was announced as the driver of the No. 02 car for the opening four races. He will race again this weekend at Atlanta Motor Speedway, as he has an average finish of 18th this season, with a best finish of 14th at Auto Club Speedway two weeks ago.

Moffitt, 27, has been vocal in the past on how he won’t race a car just to ride around, so it needs to be a solid fit. Though Our Motorsports had no prior knowledge of Xfinity racing, the Iowa native believes in the team around him.

“As a new team [Our Motorsports] wanted someone with some experience to go establish a good spot in owners points for the first four races and have some success and give it the best effort we can to get going,” Moffitt said. “Just worked out that Mike Beam [GMS team president] and a few other guys at GMS pushed my name into the hat for that and obviously it’s a great opportunity for me as well.

“I believe in the people they have and the equipment they have. It’s obviously a new time so there’s a lot of uncertainties. I’m sure there will be challenging times at the beginning, but they bought nice equipment from GMS and they have good people and I think they’re trying to do it right and actually build a successful Xfinity team.”

Though there is no alliance with GMS, which shut down its Xfinity program at the end of the 2019 season, Our Motorsports has used GMS’ chassis dyno and pull down rig to prepare its cars.

Currently, no deals are signed for another driver to pilot the No. 02 car, though Seuss will compete in races this season. Getting an established driver in the car early was an early goal for the team.

“I’m sure I could stomp my feet and say to Chris Our that I wanted to drive every race, it doesn’t mean it’s best for the team,” Seuss said. “I’m a rookie driver, we’re a rookie team, that’s another reason we went in the direction of getting Brett is he can help us grow and any concerns he has we’ll work on. Whereas I might not be able to feel the things or know the things he does now.

“We didn’t want to be rookie team, rookie driver. Right now we’re rookie team, veteran driver and then when the team gets running on all cylinders, hopefully, it can make me look good as I go through my learning curve.”

Through four races the No. 02 team sits tied for 16th in the owner standings, only 15 points behind the cutoff to the playoffs.