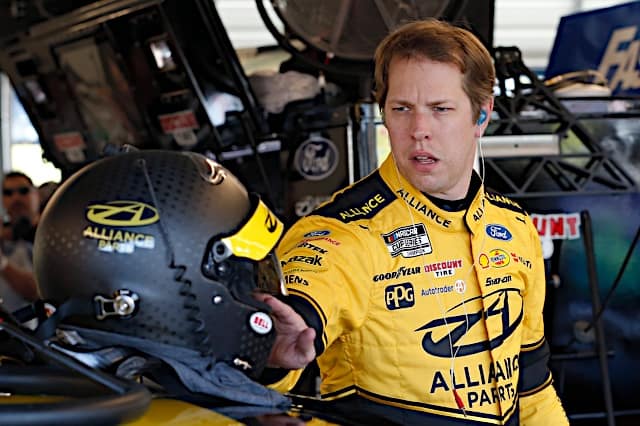 The NASCAR Cup Series will see plenty of change in 2021, from the cars to the schedule. But the biggest change may be the driver lineups at each team, as nearly a quarter of the Cup drivers are set to be free agents at the end of 2020.

Arguably the biggest name of all those free agent drivers is Brad Keselowski, and he is the one who should stay right where he is.

Keselowski has been with Team Penske since late 2009, and in the following three years won the organization its first Xfinity and Cup series titles. The Michigan native has produced more wins overall than any other driver to strap into any form of race car for Penske, passing the legendary Mark Donohue for that mark last year.

But despite all that history made with the Captain, rumors have been rampant that Keselowski is looking elsewhere. The rumor that’s picked up the most traction is that Keselowski will replace fellow Cup champion and future NASCAR Hall of Famer Jimmie Johnson in the No. 48 for Hendrick Motorsports.

Of course that’s just a rumor for the time being, and nothing has been reported on the situation. But Keselowski didn’t exactly dispel the talk of him leaving Penske this past weekend at Phoenix Raceway.

Brad Keselowski says he has not started deep contract talks and answers the questions of how long he will race and if he will talk to other teams: pic.twitter.com/8OOC6WoglZ

“Thankfully, I’ve got a pretty good car right now, so that’s not always easy to come by,” Keselowski said in the media bullpen. “But there’s also a lot of really good rides out there, too, so we’ll see how it goes.

“I’m not dialing out, but if somebody dials in, I’ll certainly listen for sure.”

I don’t blame Keselowski for entertaining the idea of free agency. It’s also entirely possible that Keselowski is entertaining offers from other teams to force Penske to throw some more money on his new contract.

For the first time in a while, a driver is in a situation where he can ask for more money without the fear of being replaced by a younger, cheaper up-and-comer. Because who would Penske replace Keselowski with if he leaves? Austin Cindric doesn’t seem ready for that car yet, and I doubt Stewart-Haas Racing will let Chase Briscoe slip away to a rival team. Coincidentally, both of those drivers are products of the Brad Keselowski Racing team that used to compete in the Gander RV & Outdoors Truck Series.

Another BKR alumnus is Ryan Blaney, who was one of the pending 2021 free agents until he re-signed with Penske last week. Now that Penske has secured the team’s future with Blaney, the Captain needs to focus all attention on bringing back Keselowski, because there simply isn’t a better option out there. And there isn’t a better option for Keselowski than to stay with Penske.

The No. 48 for Hendrick might be a more prestigious ride than the Penske No. 2 thanks to Johnson’s seven titles, but that car hasn’t won a race since 2017. Keselowski, on the other hand, has won three races in each of the past three seasons.

Hendrick has nearly always had one car that doesn’t produce for whatever reason — the forgotten car. In the past, it was the No. 25 car with a plethora of drivers. Longtime NASCAR journalist Steve Waid noted on a recent Scene Vault Podcast episode that instead of firing employees he was having problems with, Rick Hendrick would often move them to the No. 25 car.

Over the past handful of years, HMS as a whole hasn’t been as strong as it was when it was winning 12 championships in a 22-season span. Since 2018, Hendrick has only won eight races. In that same span, Penske has won 15 times with one less car.

Also, why would Keselowski want to return to the team that he had a previous falling out with? Keselowski was supposed to split Hendrick’s No. 5 car back in 2010 with Mark Martin and take the car full-time after Martin retired. Instead, Hendrick talked Martin into racing full-time again in 2010, effectively forcing Keselowski to look elsewhere if he wanted a Cup ride — which is how the Penske deal came about.

I understand any frustrations Keselowski may be dealing with at Penske right now. When he does win, it is always in one spot of the season where the No. 2 crew gets hot for a couple weeks. Last year, Keselowski won three of the first 12 races, then had a drought the rest of the year. In 2018, his three wins were in consecutive weeks and he didn’t do much the rest of the season.

There’s probably a part of Keselowski that is jealous of Logano’s success, as would be the case for any other racecar driver. And to top all that off, Penske just moved Paul Wolfe, Keselowski’s crew chief since his Xfinity title in 2010, to Logano’s car — a pairing that has already amassed two wins through the first four races of 2020.

On somewhat of a weekly basis, Keselowski has taken shots at Logano, whether it be in the FOX interview in front of the Daytona International Speedway infield care center after a Logano push ended his day or on the radio last week at Phoenix after a Logano push got him a little too loose on a restart.

Keselowski has every right to be jealous of Logano’s successes and angry about his aggressive driving style. I’m sure every multi-car team in the garage has a driver who thinks the other driver is getting better equipment and personnel. And you don’t have to be friends with your teammate, which is odd considering Keselowski and Logano used to get together for lunch and decide who would race the Penske Xfinity car.

But instead of using these frustrations to make him want to leave the team, Keselowski should instead use them as motivation to step up his game and beat Logano. After all, wasn’t it Keselowski who put in a good word to the Captain about hiring Logano in the first place? He’s got another future Hall of Famer as his teammate, he should use that as inspiration. Jeff Gordon didn’t leave the team he had all of his success with just because Johnson came along as his teammate and started winning everything.

Penske and Keselowski were perfect for each other when they first got together. Penske gave Keselowski a shot at Cup in a competitive ride, and Keselowski made Penske relevant in the Cup Series again. They’ve produced so many firsts and milestones together that it’d be a terrible thing for the driver and team to go their separate ways just because another team might have a better offer.

Keselowski’s legacy has become paired with the No. 2 car, and he’s only eight wins away from tying Hall of Famer Rusty Wallace for the most Cup wins for Penske. If he moves to the No. 48 instead of staying put, then he’d only be stuck in the shadow of another legend nearly impossible to surpass. He needs to stick it out with the Captain for at least one more contract, because Penske is his best bet and it has become his home.

Kes ain’t going anywhere. His ego is invested in the PENSKE name and all the trappings that go along with it.
Brad does seem jealous, has been whiny the past 2 years. What is funny is he bitching about Logano’s aggressive driving style! Come on Brad…look in the mirror!!!!!!!!!!!!! All drivers, look in the mirror. Tis your job is it not?

I do think Brad seems a bit out of sorts; he’s lost a bit of identity at Penske, and needs to get it back. We have the young up and comer, talented Blaney with the down to earth personality and the great hair (sorry, had to add that), and Joey, always smiling and upbeat, aggressive – yes!, and he’s just very appealing, at least to me. Brad comes across as a bit sour and overly serious as of late. I find this sad because Brad is one of the most interesting personalities in the sport. His opinions are always food for thought, introspective and thoughtful. I hope he gets his bearings and gets to victory lane soon. I would love to see him stay with Penske and the Penske boys become a solid united team-coolest team in the garage. Brad can take the lead with this, and I hope he does. I just cannot picture him at Hendrick; they are rather dull in comparison to Penske.

I’ve sensed Brad’s frustration for a while now, but he’s handled it professionally. His only negative comments about Logano were for specific actions on the track, and his comments weren’t inappropriate. Brad’s still a good driver and he’s a smart guy. As a Keselowski fan, I’m confident he’ll make the right decision about his future.

As for the #48, my crystal ball sees Kyle Larson in that car next year, and I’d like to see that.

Why does it seem that Racing is trying to imitate football? I have to wonder if for example Brad needs more money. I find the idea repulsive if greed has anything to do with it.