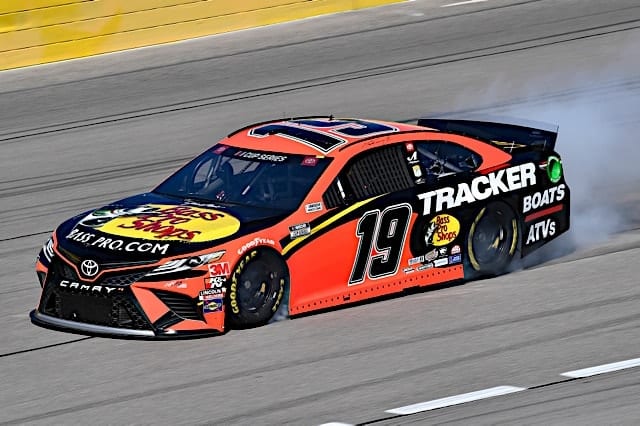 1. Martin Truex Jr. has not finished better than 14th in the first four NASCAR Cup Series races. What is wrong in the No. 19 camp?

Frank Velat: Over the course of the opening four races, two crew chiefs have proved their value. One, Paul Wolfe, has done so by doing everything right. The other, Cole Pearn, has done so by doing absolutely nothing. This has all the look of the Ray Evernham/Jeff Gordon split. Martin Truex Jr. won’t fall off the face of the competitive landscape but it will take him a bit to adjust to this new normal. But I do think the team is floundering a bit without their longtime leader.

Adam Cheek: If I had to pick a culprit, it would simply be the adjustment to a new crew chief and what’s simply a bad start to the season. Most drivers go through a bad luck streak in one season or another, and Truex isn’t immune to that. I will give credit, though, since he had a heck of a run going at Phoenix Raceway until he got into the wall late in the race. We’re not far along enough to project how Truex’s 2020 season will turn out, but for the sake of seasonal momentum his team should turn this around soon.

Amy Henderson: I’m not convinced anything is really wrong. Truex has had speed, often more than his teammates, every week. Communication doesn’t seem to be an issue, though he is adjusting to a new crew chief this year. The main issue has been some really bad racing luck: from a crewman with a cramp to tangles on track, it just seems to all be happening at once.  The solution: stay the course. The cars are fast, Truex is driving them as he should.  This too shall pass.

2. Kyle Petty recently said that elite drivers hanging out and being friends off the track is a problem. What do you think?

Velat: Kyle Petty is probably just mad that other drivers ran him over on the track instead of in a supermarket. I don’t think it would have been detrimental if he had been fishing buddies with Dale Earnhardt or rode bikes with Ernie Irvan. Fans like to see the playful banter back and forth between their favorite drivers. There doesn’t have to be legitimate dislike for racers to be able to aggressively compete.

Henderson: Is it a huge issue? Hardly. There have always been drivers who were friends off the track. If it interferes with them doing their jobs, i.e. helping your buddy instead of your teammate or not racing your friends hard, then it’s something their car owners need to address if they feel it’s a problem. Other than that, if they’re able to race each other just like everyone else on Sunday and have a beer on Monday, more power to them. Sometimes moments remade more special because of who’s involved.

Cheek: This could go both ways. Those elite drivers will have respect for their competitors on track and might be more inclined to work together in certain situations, but it could also lead to too much leniency on the track. It’s not necessary for the best of the sport to hate each other, though, and seeing those friendships develop outside of racing makes for good content and is fun to watch.

3. The Kyle Busch bounty in the Gander RV & Outdoors Truck Series is up for grabs this week. Will anyone collect?

Henderson: My heart says yes: Elliott and Larson (running next week) are plenty talented enough to pull it off and would take great pleasure in doing so. My head, though, says that the richest team in the series will probably have the edge.

Cheek: No. As fun as the bounty system is, I don’t see anyone outrunning Kyle Busch. The four set to challenge Rowdy for the money this weekend are Chase Elliott, John Hunter Nemechek, Brennan Poole and JJ Yeley. The driver with the best shot is Elliott, of course, and it should be a fun battle. However, with KBM’s equipment and Busch’s streak of winning his last seven Truck starts alive and well, he’ll outrun all of them; Elliott will have a great shot, but Rowdy’s dominance of the series will continue.

Velat: Yes. This reminds me of the old No Bull 5 program that Winston ran in the late ’90s. A select group of participants eligible for a significant cash bonus if one of them should win. Such a prize can elevate their game, sharpen their focus and change their strategy. Racing is always about winning, but when you dangle an extra carrot out there, someone will sell put to get it, and one of the challengers gets the better of Rowdy this weekend.

Have I missed something? Is Cole Pears back at the track? I thought he went back to the land of ice and snow up north? Isn’t he working at a bowling alley spraying foot disinfectant in bowling shoes or sharpening blades at an ice rink somewhere?

As for the friend business, I could care less. What is annoying, the driver lets it slide when their camping trip buddy does something on the track to them and silence. They become totally hypocritical when a non camping buddy does the exact same thang! They proceed to hop out of the car and develop diarrhea of the mouth on national TV bashing the guy who isn’t a camping buddy! The double standard and hypocrisy is what sucks.

re: Pearn. I had the same question. If Frank is saying Pearn isn’t there, he did so in a confusing way…

I know his name is PEARN, I always call him PEARS..It rolls of the tongue..sounding French COLE PEARS!!!!

That is the point he is making with Cole Pearn. Now that he is gone, we can clearly see the value he had to MTJ through these 4 races

I enjoy seeing rivalries for sure and miss some of the epic old-school ones. Still, there’s something to be said for drivers who are relaxed and enjoy each other’s company at the track. They have more fun and are in turn more fun to watch.

I remember a lot of the rivalries were between the fans. Cause more drivers had a shot at winning races when there were single car and a few two car teams.
Then again these were long term fans not here today and gone tomorrow new fans that have been sought after

Honestly, anything Kyle Petty generally says goes in one ear and out the other…ha same with when DW was in the booth. I do itch for a little more fire from these “young guns”. Would rather here them be angry over finishing top 5 after dominating that race most the day than come out talking about what a great day they had.

I thought we all knew Cole brought MTJ to the next level. Prior to Cole MTJ was always just meh in the Cup series. So honestly, I think MTJ has done a lot better this year than I thought he would. He has been fast and has passed a lot of car but has also had bad luck which happens in racing.

I don’t think drivers being friends is such of a big deal. Two of the fiercest on track rivals I can remember were Dale Earnhardt and Rusty Wallace, who were also good friends off track. Most of the drivers I’ve known and crewed for over the years, have been friends with at least some other drivers. If you’re friends with another driver, you might cut him a little extra slack if he’s faster and trying to pass you, but you also might race him just a little bit harder, because it can be fun to race hard with a good friend you know and trust.

That’s not to say I wouldn’t want to see some new rivalries develop in NASCAR, it’d be good for the sport and fun to watch. I’m still hoping that eventually something will develop between Elliot, Blaney, Erik Jones, and some of the other young guns, though we’ll probably have to wait till more of the other old guard retires.