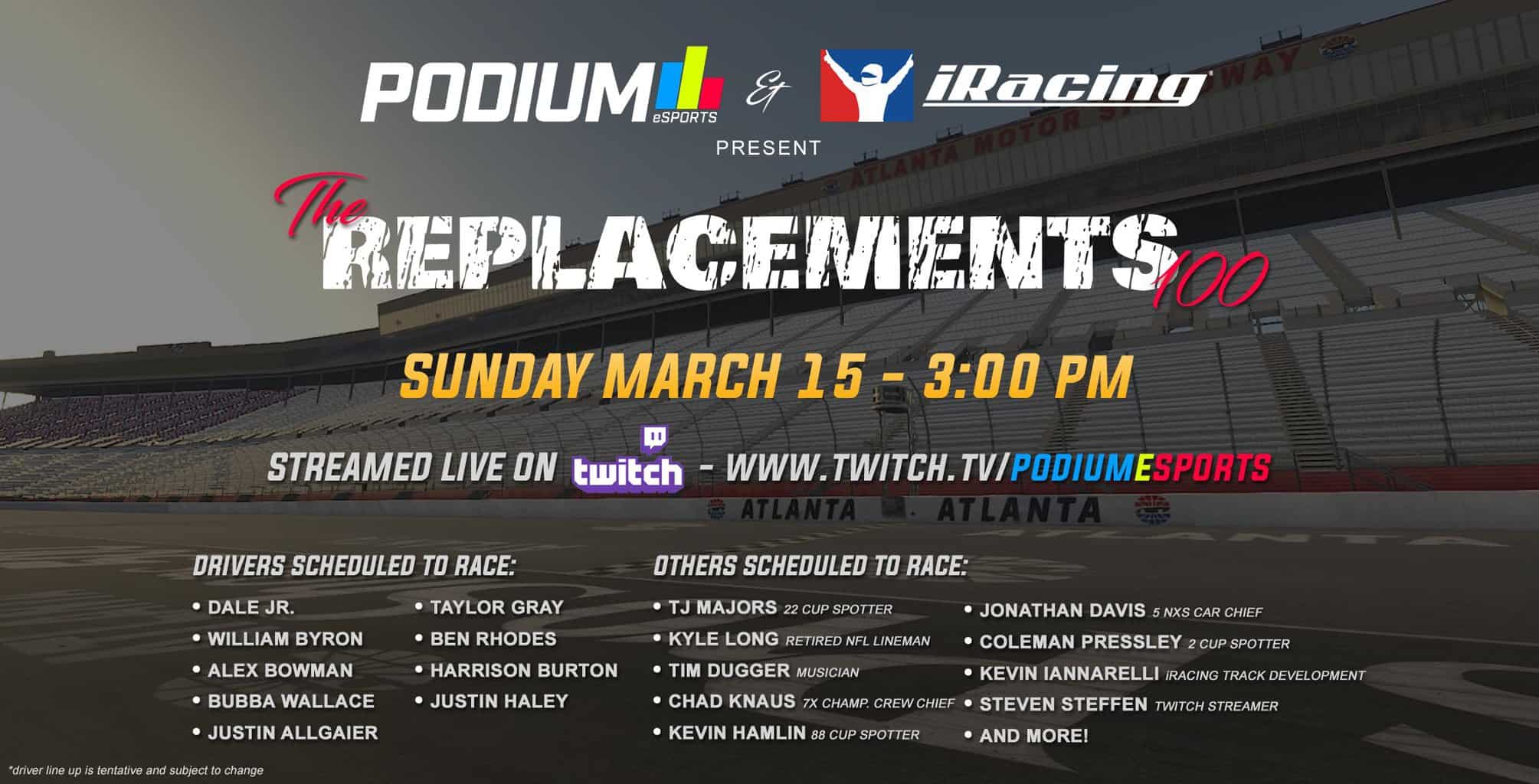 The NASCAR world is paused for the moment, but a number of drivers and crew members are using iRacing to keep racing going in some form for the time being.

Earlier this week, the COVID-19 coronavirus outbreak forced the sport of stock car racing into an unprecedented state of suspended animation, with NASCAR postponing the race weekends at Atlanta Motor Speedway and Homestead-Miami Speedway. There’s no way to know for sure when the engines will fire back up, but a number of NASCAR personalities are doing their best to ensure there’s still racing, including semi-retired Dale Earnhardt Jr. and NASCAR Cup Series drivers Alex Bowman, Bubba Wallace and William Byron.

While this list is sure to grow over the weeks to come if real-life races continue to be postponed, here’s a quick look at two coming up over the next few days that are worth watching to scratch that itch for on-track action. And who knows — you just might enjoy it enough to give the eNASCAR Coca-Cola iRacing Series a shot as well.

Along with Earnhardt and the aforementioned Cup stars, The Replacements 100 is slated to feature NASCAR Xfinity Series drivers Justin Allgaier, Chase Briscoe, Harrison Burton and Justin Haley, as well as Gander RV & Outdoors Truck Series competitors Tyler Ankrum and Ben Rhodes. As the name suggests, this virtual race will attempt to fill some of the void left behind by the races that would have taken place this weekend at Atlanta, with the racers going at it for 100 laps, or 150 miles, around iRacing’s super-accurate recreation of the track.

With the caveat that the driver lineup is subject to change up until the race goes live, here’s a look at the notable names currently scheduled to take part:

How and Where to Watch: www.twitch.tv/podiumesports; stream starts at 3 p.m. ET with the green flag scheduled for 3:30 p.m.

Ryan Vargas, who has made both Xfinity Series and ARCA Menards Series East starts in his young racing career, first tweeted out the idea for an iRacing event to benefit charity on March 13. The response was immediate, and interest quickly followed from the likes of both physical and eNASCAR racers.

Among those to throw their hats in the virtual ring for Vargas’ event are Josh Bilicki and four-time eNASCAR iRacing series champion Ray Alfalla. Unlike The Replacements 100, which is more of an all-star race, Vargas’ event sounds like it will provide a way for nearly anyone to be able to qualify and try their hand against NASCAR drivers and top eNASCAR stars in the main event.

Vargas expects to have full details announced on Monday, March 16.

Expect the whole event to be announced Monday.

We have a title sponsor, several presenting sponsors, and even a purse that will be donated to the winner’s choice of charity.

How and Where to Watch: TBD; Frontstretch will update this info as soon as it becomes available