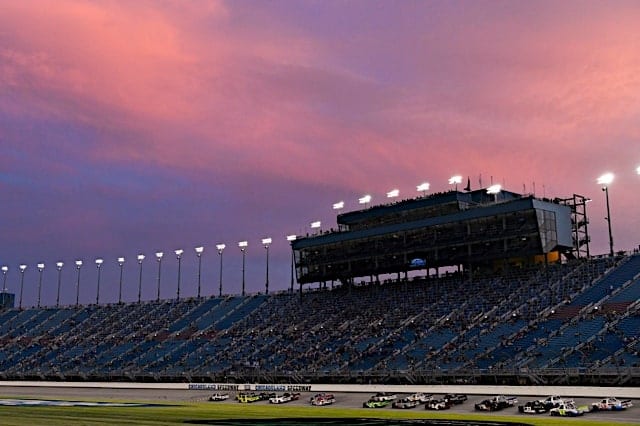 The NASCAR coronavirus decision Monday (March 16) to postpone stock car racing for two months is unprecedented. It’s just the second time this century a NASCAR Cup Series race has been pushed back outside of weather delays. And after the terrorist attacks of Sept. 11, 2001, the sport took just one week off, switching New Hampshire Motor Speedway’s event that weekend to the season finale.

By comparison, NASCAR is poised to take nine weeks off. Its next Cup race won’t be until Saturday, May 9, at Martinsville Speedway. Seven races compose nearly 20 percent of the season schedule, producing an earthquake that shakes up what had been a promising season. Plenty of question marks are left unanswered as the sport prepares for a frenetic return to racing midsummer.

Note this decision causes the longest layoff in the sport’s modern era but not the longest in history. In the 1950s and 1960s, NASCAR often started its new season the year before. This postponement matches a nine-week layoff during the infamous 1967 season where King Richard Petty won 10 straight races. He earned a victory in a November 1966 event at Augusta Speedway before the sport took the holidays off, reconvening at Riverside International Raceway in January 1967.

But that gap was a choice, one the teams were well prepared for. NASCAR’s old, bulky schedule never truly created a long layoff or the three-month offseason we have now. Now NASCAR is faced with a second offseason of sorts; they’ll race a total of four times over five months.

2. When Will the Races Get Made Up?

That’s the big question on the minds of everyone involved in the sport. Looking ahead, there were just two off weeks left on a truncated NASCAR schedule this season after a move to end a week earlier (Nov. 8 at Phoenix Raceway). Those weekends, left empty for the Summer Olympics (July 26, Aug. 2) will almost certainly be used up.

NASCAR sources have said all options are on the table. That means anything from midweek racing to doubleheaders in an effort to make up these events. It should be noted six of the seven postponed races (Atlanta Motor Speedway, Bristol Motor Speedway, Dover International Speedway, Homestead-Miami Speedway, Richmond Raceway, Talladega Superspeedway) are in a similar geographical region on the East Coast. That makes midweek racing the most realistic possibility during the summer months.

The bigger question is whether the sport wants to jumble up the schedule within its new 10-race playoff; my guess on that is no. To keep that portion of the schedule, then, would mean 22 races in 17 weekends, a Herculean task for even the sport’s largest multi-car teams. Can you imagine a smaller, one-car effort like Go FAS Racing trying to turn its cars around during that time frame? It’s a daunting task.

NASCAR can open up another weekend by moving the All-Star Race to the Friday before the Coca-Cola 600. That would open up a slot to send teams to Texas Motor Speedway, the track furthest away from team shops on the postponed list.

Dover, as one of the few independent tracks left, may be open to a doubleheader the weekend of Aug. 22-23. Homestead, meanwhile, is close to Daytona International Speedway in Florida. Would the sport be willing to make that the new regular season finale in early September? If you make Homestead a midweek finale, say, on a Wednesday night, you could roll with momentum right into the playoffs at Darlington Raceway.

Those changes would leave just four races left to make up: Atlanta, Bristol, Richmond and Talladega. NASCAR would likely utilize the July 26  and Aug. 2 open weekends along with two midweek slots to make up the difference. My bet would be the short track races, easier to prepare for and recover from, fall into the midweek slots. The best options might be after Saturday night events, giving teams maximum time to prepare for a Wednesday night show. Note that the return date at Martinsville is on a Saturday night; could NASCAR try and sneak in a short track date (Bristol) right after?

NASCAR is unique in its need to have outside sponsorship support for its race teams to survive. The economic fallout from coronavirus, which some economists claim may be worse than 9/11 in the short-term, could cause some companies to default on deals. It’s hard to pay up for a stock car program, no matter the contract, when you’re filing for bankruptcy protection. In 2002, the first year after the terrorist attacks, NASCAR fans might remember Travis Carter’s ill-fated deal with Kmart. Its bankruptcy, along with economic upheaval, ultimately brought down his two-car program.

As you might expect, the economic impact will be felt by the sport’s small businesses first. Sam Hunt Racing, a part-time NASCAR Xfinity Series team, was one of the first to announce it’ll be suspending operations.

Expect others to follow in the coming weeks as they try to save money for what will be an expensive summer slog. Racetracks also have to deal with economic fallout, too; non-NASCAR events will be canceled during this time period. Also, depending on CDC guidance, you could see a number of races return initially without fans. That would cause a layoff of concession workers and other part-timers for that race weekend while leading to cuts in the race purse.

Over time, the economic impact is sure to trickle up the food chain. Circuit of the Americas in Austin, Texas, has already laid off some of its full-time staff.

Will any NASCAR-sanctioned track come next? Two months is a long time to be sitting around without much to do other than upkeep and marketing your future events. In some cases, like Atlanta, it’s impossible to promote a date it doesn’t know yet.

The larger teams like Hendrick Motorsports, Joe Gibbs Racing and Stewart-Haas Racing, among others, have either closed their shops or dramatically limited personnel. How many of those people get paid? And how about the pit crews whose main jobs are to pit the car on the weekend? It’ll be interested to see how many of these teams have cash reserves and which sponsorships are willing to pay during this time period without invoking a force majeure clause. The lack of purse money, expected in their monthly budget, has to trickle down at some point.

One portion of NASCAR should benefit dramatically from these postponements: iRacing. Dale Earnhardt Jr. and William Byron were among the drivers participating in Sunday’s Replacements 100. I’d expect more events to be announced in the coming weeks as this sport finds itself in a unique position. A lot of drivers fine-tune their skills on racetracks by using iRacing and can be just as skilled on this different platform — entertaining fans from the comfort of their homes.

NASCAR has made clear they’re planning to fully revamp the schedule come 2021. Its five-year track agreements expire the end of this year. But how can you move dates around when it’s hard to gauge at-track attendance now?

Atlanta and Homestead are prime examples. Both have been rumored to potentially lose their spot on the schedule next season. They’re each one-date racetracks where attendance could be an issue (especially at Homestead after losing its coveted championship finale date). But how can you judge these events when they’ve been postponed and moved? What if Homestead becomes a midweek date in early September? It’s hard to say, whatever the numbers, that’s reliable data based on this schedule disruption.

By the time the 2020 schedule restarts, we’re also over a month past the point NASCAR typically makes its schedule announcement. That’ll doubtless be pushed back with so much economic uncertainty. But for how long? And how will this postponement change the sport’s ability to purchase or make agreements with new tracks over the long-term?

Social media is rife with opinions and the postponement of eight straight races. There are some who don’t believe in the severity of these restrictions universally supported by the sporting world on coronavirus. But as NASCAR President Steve Phelps made clear, fan safety is foremost on his mind.

It’s clear that holding these races, even without fans, put a number of crew members at risk for contracting the disease. Pit crews are constantly in close contact with one another, similar to the way Rudy Gobert infected other NBA players with the virus and even children while asymptomatic. As it is, it’s unknown what precautions NASCAR teams are taking at their shops to contain against the disease. Fabricators, chassis specialists and mechanics? Those are jobs you can’t do from home.

The bottom line is NASCAR did the best they could to follow federal American guidelines, acting in the best interest of fans, teams and drivers to keep them safe. Sure, there’s an economic and entertainment cost that goes along with that. But no amount of money is worth losing your grandfather, your mom or someone you love to a virus the country is struggling to contain.

Do you have a coronavirus story to share that’s NASCAR related? Please email frontstretcheditors@googlegroups.com to share how this virus is affecting your daily life.

Everything is on the table?
Does that mean if more races get cancelled and most of them can’t be made up that we go to a championship based on season long points, no playoffs?
We will know hell has completely frozen over if NASCAR has to do that.

sb
Reply to  Bill B

Step 1: Scrap the all-star race and take em to Bristol

I think NASCAR as Bill B. stated should scrap the “playoff” this year and run the events and championship at Phoenix as scheduled, hopefully. I would say another option on the table is ensure the single race venue get their race and if we have to lose one of two at another track (Texas for example, so be it. It will not ultimately matter if people in this country are indifferent about this situation and keep infecting each other. We al play a part in allowing the world to get back to “normal” schedules and work, etc.