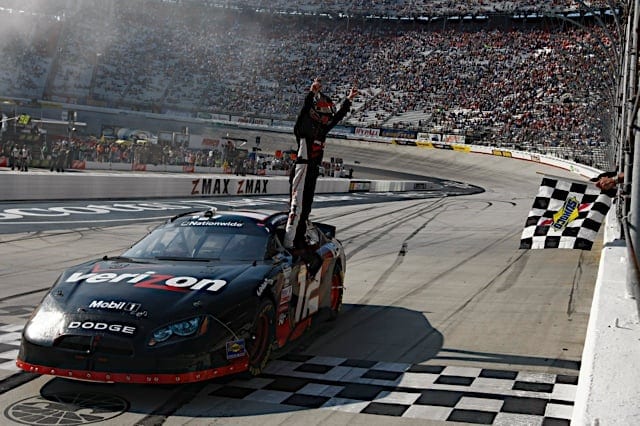 Allgaier has piled up 11 wins over the course of his career, and Friday (March 20) marks 10 years since his first triumph, coming at Bristol Motor Speedway for Team Penske.

Coming off a 2009 rookie season that saw Allgaier record three top five 12 top-10 finishes, he entered 2010 with something to prove. Adding fuel to the fire was team owner Roger Penske hiring Brad Keselowski to drive the No. 22 — the team’s second full-time Xfinity entry — in 2010, even though the two teammates previously had a love-hate relationship.

Then a baby-faced 23-year-old, Allgaier entered the fourth race of the season at Bristol having top-10 finishes in each of the first three races of the campaign (Daytona International Speedway, Auto Club Speedway and Las Vegas Motor Speedway) before the series had a two-week hiatus.

When cars finally hit the track at Bristol — 20 days after the series’ last race — Allgaier had a fast No. 12 Verizon Dodge in practice, though qualifying didn’t go as anticipated, with Allgaier turning the 30th-quickest lap because of a loose-handling racecar. But even then Allgaier didn’t panic, knowing one has to maneuver carefully through traffic at Bristol, since it’s a high-banked short track.

It took Allgaier just 43 laps to crack the top 10. By halfway, the No. 12 car raced inside the top five, battling with some of the top Cup stars, including Kyle Busch, Carl Edwards, Greg Biffle and Keselowski. The Illinois native said he knew he had a car that could contend for the victory early on in the race.

“Knowing you have a fast racecar, a lot of times you have two options. You can either go like gangbusters, try to get to the front and the likelihood of crashing is extremely high, or you can sit back, know you have a good car, use patience, take the passes whenever they come and put yourself in that position at the end. I’m not the guy that sits back and relaxes, but that day [it] just seemed normal.”

Running in second on lap 187, just behind race leader Biffle, a multi-car incident was triggered when Tony Raines and Shelby Howard made contact smack dab in front of the leaders. Howard’s No. 70 ricocheted off the outside wall, narrowly missing Allgaier, collecting Brendan Gaughan and Kasey Kahne, both of whom were running inside the top five.

Allgaier saw a potential first win flash before his eyes.

“So close to wrecking us,” Allgaier said with a smile. “You never want to see a competitor get wrecked, but there’s moments like that where you take about 10 deep breaths. You’re adrenaline must be pumping, but you look at it and go, ‘That could have been us.’ And how often does that happen? [Something] takes the car out that was the fastest car in the race or alters the course of what that race looks like for that team or that driver.

“I think that’s what the big difference was that day, another 10 feet and we’re the one sitting in the pit area and maybe Brendan goes on and wins the race.”

The gamechanger for Allgaier came when a caution flew for an incident with 34 laps to go when Jason Keller plowed through John Wes Townley in turn 2. Josh Wise, Eric McClure and Raines were caught up as well.

That set up a restart with 27 laps to go, and for the second time Keselowski chose the top line, allowing Allgaier to restart alongside on the bottom. Allgaier, surprised by his teammate’s decision, knew he was in a position to capitalize on the opportunity of restarting on the bottom lane of the front row.

“100% because his car was stuck to the bottom all day and he was really disciplined around the bottom and I didn’t think his car was as good in the middle where I was running,” Allgaier said. “I think in his mind he thought he needed to block the middle because that’s the line that I preferred.”

By the exit of turn 2 on the restart, Allgaier took the lead for the first time in the race. Leading late in a NASCAR race was uncharted territory for the second-year driver, though he felt a sense of peace pacing the field.

“I had this unseasonably calmness come over me,” Allgaier said. “It was the weirdest thing and I don’t know that I’ve ever felt it since. It just felt like I was racing on lap five. We were battling, so obviously you’re focus is intently on watching him and not wrecking each other. That was Roger’s big thing on the radio: ‘I don’t care which one of you wins, I just want one of you to win. One of you better win and one of you better finish second; you have the two best cars.’

“You think about that in the back of your mind. You’re constantly going, ‘OK, are we going to crash, are we not going to crash? Is he going to make a mistake? What if he zigs and I zag?’ All of these scenarios that are running through your mind, but it was just unseasonably calm.”

Even at Penske’s request, Allgaier was uncertain if Keselowski would follow team orders, as the two drivers had a run-in in the night race at Bristol the year prior that had Allgaier “livid.” That was the same day Allgaier found out the future champion would be his teammate for the 2010 season.

Until the checkered flag flew, the No. 12 car was stuck to the middle and upper lanes, while Keselowski was determined to make the bottom work. Though Keselowski was able to get next to Allgaier, he was never able to edge ahead, and Allgaier won his first NASCAR race.

Allgaier’s victory was Dodge’s first win in the Xfinity Series since the Bristol night race in August 2007, 939 days prior. Reflecting back on that brisk March afternoon, there were many parts of it that made the win special, aside from being his first victory.

“Roger being there, that was big,” Allgaier said. “That was probably one of the coolest memories of my racing career. Mr. Penske didn’t come to a lot of races back then on the Xfinity side. He was there that day on top of the spotter’s stand, and he was talking to both Brad and I.

“My parents, my wife, having them there to be a part of it, that’s a big moment and a big milestone. I didn’t realize the significance of that day until I won my second race. Then I realized how much the first one meant to me.”

And though the 10-year anniversary of Allgaier’s first win is upon us, he has never watched the race back, even though that day crosses his mind “all the time.”