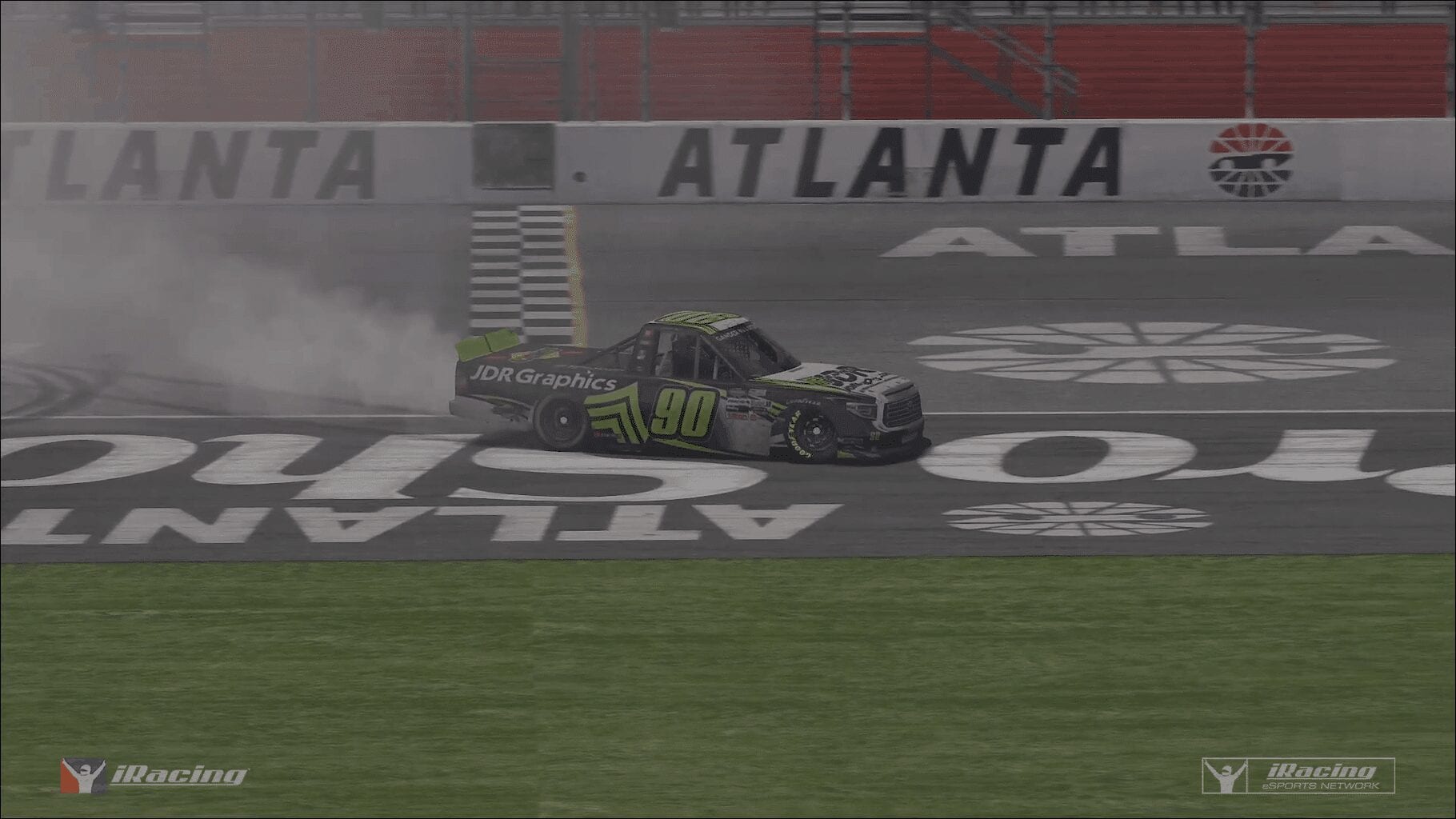 After a host of lead changes and contenders drifting in and out of the picture, Novak hung around the lead pack all night and struck when the time was right, surviving several overtime restarts and the extended distance of 109 laps, as well as an earlier crash.

The iRacing event, primarily organized by Xfinity Series driver Ryan Vargas, was set up over the previous several days, gaining ground on Twitter and eventually attracting 300 entrants. Vargas suggested the event in what he described as a “half-joking” tweet, but the attention the idea received put it into practice.

Those 300 entrants funneled into several rounds of qualifying heats, whittling the field down to 23 trucks. The additional 20 spots were filled with drivers guaranteed a berth in the race prior to qualifying.

iRacer and JR Motorsports eSports driver Michael Conti won the pole and led from the green flag, but the yellow flag quickly came out after several first-lap incidents. Joey Stone’s No. 8 truck would be the first casualty of the event, turning dead right into the wall before taking the green flag and spawning a huge pileup of trucks on the frontstretch.

Conti continued to lead as a few cautions marred the first quarter of the race, but faded back into the top 10 as the laps went on.

The Big One struck early on lap 18, as Donovan Strauss’ No. 51 machine was hooked and turned towards the inside wall. The spin triggered a massive accident that saw Tyler Garey’s No. 26 and John Theodore’s No. 27 trucks go flipping.

Novak was involved, sustaining minor damage after spinning and backing into another truck.

On the restart, a side-by-side battle between Max Brady and the NASCAR Gander RV & Outdoors Truck Series’ Christian Eckes ensued, with Brady eventually clearing Eckes for the race lead.

Brady’s lead wouldn’t last long, as he suffered issues and fell back into the field. Michael Frisch and Jake Nichols both inherited the lead afterwards, with Frisch leading at the lap 50 halfway point, but Novak charged back through the field and made his way to the front once again.

With former NASCAR driver and current NBC Sports analyst Parker Kligerman inside the top 10, the lap 64 restart gave way to some of the best racing of the night – Novak, Nichols and four-time iRacing champion Ray Alfalla raced three-wide into turns 3 and 4, staying that way until just before the start/finish line on the first lap back under green.

Close behind them were Kligerman and the No. 9 of Eric Smith, and a quick caution for Nick Miller reset the field for a lap 70 restart. Novak’s No. 90 Toyota Tundra led the way back with just 30 circuits remaining, but Smith would grab the lead until five laps remained.

Novak outdueled Smith after a restart on lap 93, and would hold on to the top spot until the checkered flag waved. A few cautions broke up the final few laps and sent the race into overtime, and Novak survived a challenge from Nichols to win the eTruck Series Night in America. The live-stream of the race had more than 3,000 viewers at its conclusion.

Nichols, Alfalla, Brady and Oliver Cordell rounded out the top five, Brady working his way back from an earlier flat tire.

“We had a really, really good truck the whole time, surprisingly,” Novak said in his post-race interview. “Honestly, I really didn’t expect to be that good, I had to come all the way through the field.”

“We carved through the field all the way up to third,” he added, “and my tires didn’t fall off…right then and there I knew we had a truck that could win that race, and those last few restarts I was pretty confident. Pretty happy with how they played out…overall a really, really fun race.”