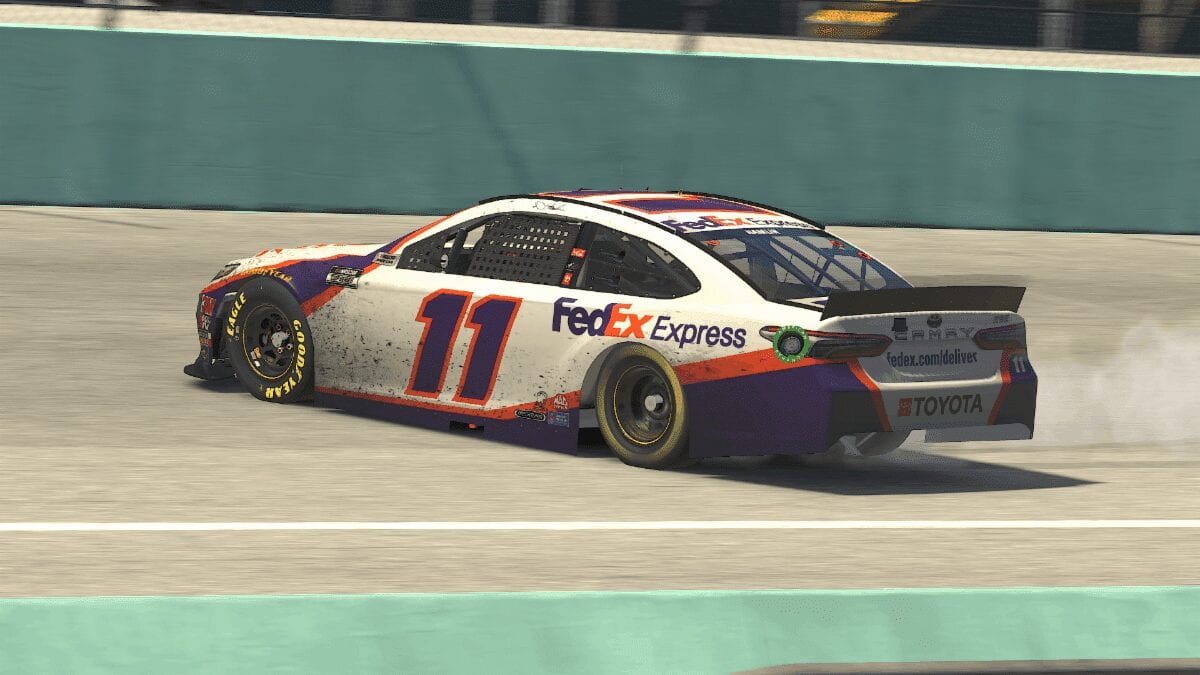 Denny Hamlin edged out Dale Earnhardt Jr. to win Sunday afternoon’s iRacing Pro Invitational Series at Homestead-Miami Speedway, a race that was a veritable wreckfest but ended with an exciting final-lap pass for the lead.

The event, featuring 35 drivers from NASCAR’s three premier series, was put on in lieu of actual races as the 2020 season has been put on hold due to the coronavirus pandemic.

The pole went to current Rick Ware Racing driver Garrett Smithley, while iRacing veteran William Byron qualified second to fill out the front row. Byron quickly grabbed the lead from Smithley and led for about 15 laps.

The first caution flew on the first lap, as Anthony Alfredo got sideways and into the wall. Lap 14 brought out the second yellow flag, with Jimmie Johnson suffering damage when he drove through the aftermath of the wreck. Hamlin used strategy to inherit the lead, taking only two tires.

Johnson would also be involved in the next incident: His No. 48 got loose when the field was lapping the car, causing the Chevrolet to slide sideways and trigger a massive accident. Ryan Preece made hard contact with Johnson’s car, while Clint Bowyer slid through the melee and glitched through Landon Cassill‘s No. 89.

The early incidents put pressure on a number of the drivers, as each participant received one full “reset” — the ability to restore their car to pristine, pre-race shape and attempt to make a run toward the front.

Chastain suffered heavy damage after getting airborne on the backstretch during a crash triggered by Chris Buescher that collected Matt DiBenedetto and Justin Allgaier. The wreck that followed collected both Busch brothers — Kurt Busch made hard contact and slid up the track, collecting brother Kyle in the aftermath.

Byron continued to lead, but Timmy Hill soon got the better of him to take the top spot. Smithley followed close behind, and he and Hill would subsequently battle for the lead after passing Chase Briscoe, who stayed out under a caution.

Alex Bowman, Earnhardt Jr. and Byron suffered major damage in a turn one crash, and Kyle Busch broadsided Bowman in the aftermath as the No. 88 sat motionless on the track. Bowman took to Twitter to blame the incident on his dog Finn.

Hill and Smithley led the field back to green and tried to make it a two-car battle for the win, but Earnhardt Jr. broke free of the pack and began to close in, with Briscoe and Hamlin close behind. Hill grabbed the lead back, and would swap the top spot with Earnhardt several times before Earnhardt’s No. 8 cleared the No. 66.

Hamlin then passed Hill to take second and began to use the high line around the racetrack, drawing even with Earnhardt as the white flag flew.

Coming off of turn four, Hamlin and Earnhardt were side-by-side, and the slightest contact between the two caused Earnhardt to get loose, allowing Hamlin to clear him and win the Pro Invitational Series.

“That was unbelievable,” Hamlin said in a post-race interview. “I didn’t think we were going to get back there.”

“[Dale Earnhardt Jr.] gave me the proper space and we were able to race to the line,” Hamlin said of the finish.

“[Hamlin] had about 10 laps better tires than we did,” Earnhardt said, “And he was very, very good … I was trying to get a good finish, trying to win the race and trying not to wreck anybody. I probably gave Denny a little more room than I wanted to.”

The 100-lap race was the top trending topic on Twitter by the event’s midpoint.

No plans have been announced regarding another race of the sort, but Hamlin said after the event that he hopes the series will continue.

Guess dogs can be blamed on homework, and causing crashes virtually!