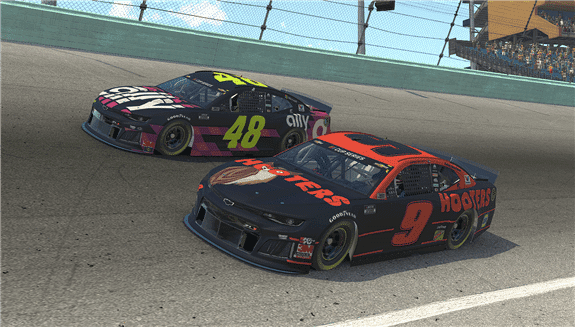 What a week this has been for iRacing. The first live telecast of NASCAR drivers racing on the simulation platform occurred on Sunday, and since then, it has been the talk of motorsports.

iRacing has its loyalists but it also has its naysayers. Some call it the closest to the real thing you can get, while others simply think it’s a video game that people have fun with. Whatever side you are on, iRacing will continue as next week another broadcast will be held with drivers running at Texas Motor Speedway.

That got us thinking, is iRacing the future of NASCAR racing? Can we see iRacing take over as the premier racing destination over the next 30 years? Our writers Clayton Caldwell and Adam Cheek debate.

iRacing has certainly picked up a lot of interest in the last few weeks and while for me, iRacing isn’t anywhere close to the real thing, I think iRacing may trump actual racing in the future.

The biggest problem with modern-day NASCAR racing is the money it costs to operate a race team. Between paying a pit crew, a driver, people in the shop and marketing departments, some of the big-money operations have upwards of 400 or 500 people working on their race teams. Just think about the amount of income that needs to come in to make a profit on that.

That doesn’t include the money it takes for parts to build the cars and the travel expenses. There’s no question, no matter who you talk to, they will agree. The cost of racing today is absurd.

If you watched the event on Sunday, you could not help but notice how amazed both Mike Joy and former Cup Series legend Jeff Gordon were by how realistic the racing was and how realistic the tracks were. The technology that they pour into that system is incredible and as the years go on the technology will get better and better and virtual racing will get more and more realistic.

Look what teams are using for test sessions today. All you hear about is how drivers are on simulators and how the simulation is the best way for these teams to compare to the real thing. Sim racing is just in the beginning stages of its life and I believe 20-30 years down the road, it will continue to grow and maybe even on day, be more popular than NASCAR.

The opportunities iRacing brings to the table are endless. Part of my knock on NASCAR in recent years has been the fact that no longer could an everyday person with an average lifestyle dream about becoming a NASCAR champion. It takes a ton of money and a ton of resources to make a name for yourself in the lower divisions. Then if you try and move up to NASCAR, it’ll take even more money to help fund your operation. It’s crazy.

In iRacing that’s not the case. Sure, some folks may have a better simulation setup and some drivers may have more people helping them than others, but the bottom line is if you can race, if you have talent, you can win. Money is not an issue.

Plus, take the recent incident with Ryan Newman into consideration. Newman’s wreck put the entire NASCAR world on alert about the current safety concerns in today’s racing. We came as close as we have since 2001 of having a major tragedy on the racetrack. With iRacing, none of that exists. Drivers can wreck each other or run as dirty as they want without the concern for their fellow drivers well-being. It adds a whole different element to racing.

It’s something I think will continue to develop and continue to catch on with fans across the world. It may not be better. Fans may frown upon it. But as the next generations come to life, you can bet iRacing will have a major impact. – Clayton Caldwell

Let’s start with something we both agree on. iRacing isn’t anywhere close to the real thing, for sure. I second Clayton’s take above in that regard.

I’m definitely in the demographic proximity for iRacing, as its popularity has soared among the younger generations, and I’ve certainly played my share of NASCAR and other racing video games – I firmly believe that DiRT2, released in 2009, is still one of the greatest racing games ever crafted.

Heck, I’m still playing my share of those video games now, what with quite a bit of time on my hands with the coronavirus pandemic.

It’s been fascinating to see the evolution of iRacing, especially, over the past few years – of course, William Byron’s experience on the game helped him hone real-life skills and paved the way for a near-championship in the Truck Series in 2016, an Xfinity title in 2017 and eventually his place in the seat of Hendrick Motorsports’ iconic No. 24 Chevrolet.

Now, after several years of iRacing’s rise in prominence, here we are. It’s basically the primary source of (live) entertainment for us NASCAR fans, and there have already been three big events since the stoppage of the 2020 season, particularly the Pro Invitational Series’ debut on Sunday. Thirty-five drivers in NASCAR’s top three touring series took to the virtual Homestead-Miami Speedway on a live Fox Sports telecast, with Mike Joy and Jeff Gordon calling the action as they would for a real race.

Nearly a million viewers tuned in to see a wreckfest that culminated in a last-lap pass of Dale Earnhardt Jr. by Denny Hamlin, an exciting finish to a pretty fun race.

All of this is indeed a lot of fun, enjoyable to watch and certainly provides entertainment without the constant presence of NASCAR on track every weekend.

However, I don’t believe it will eventually replace real racing or surpass it in popularity.

Is iRacing realistic? Absolutely. Does it come anywhere near providing a substitute for going to the track – as a fan, a journalist, a photographer, what have you – and hearing the roar of the engines, smelling the charred rubber or being surrounded by activity every second of race weekend? Absolutely not.

The realism is there for the most part, and I certainly can appreciate that. One of my longstanding gripes about NASCAR games in general – and iRacing isn’t exempt, but they’ve done a good job – is the issue of realism. I’m very partial to NASCAR ’15, and that game is pretty accurate, but they all have their flaws. Whether it’s literally glitching through a competitor, a car flying 50 feet in the air when hit by another, or a number of other things, all are problems that probably won’t be completely eradicated for a while and would take viewers out of the race.

The overt danger of NASCAR is another argument for why iRacing might eventually replace on-track action, and Ryan Newman’s crash as mentioned above is a very solid (and recent) example. The safety of drivers and others is something NASCAR accepts as a risk every time it visits any track, in particular high-speed ovals such as Daytona and Talladega (the Cup Series alone has had flips in three of the past five superspeedway races). However, as someone who’s followed the sport for almost 20 years, I don’t believe the general fanbase would take that into consideration – I just don’t see it happening for that very reason.

Monetarily, there’s always been larger and smaller teams in the sport, something I’ve never had an issue with. iRacing would put everyone on the same playing field, but every single sport operates the same way – teams with more money will have more opportunities and options than smaller teams. Whether it’s Joe Gibbs Racing, the Chicago Cubs or the Seattle Seahawks, those teams will likely always have more to work with than StarCom Racing, the Miami Marlins or the Cleveland Browns.

One positive, though, as we’ve seen recently with drivers like Dale Jr. and Bobby Labonte, is that iRacing allows retired drivers to still race realistically and continue to be on the track in some capacity, even if it’s virtual.

iRacing won’t replace actual racing, but while the 2020 season is at a standstill, I’ll be sitting back and enjoying the closest thing we have to reality. – Adam Cheek

A few thoughts here: One, don’t worry. Sooner or later, (and now probably sooner) the fine folks up in MA will be cashing in by selling IRacing to say NASCAR, Microsoft, or perhaps even a Comcast/NBCU. Any of those buyers will ruin IRacing promptly – making the point of the story moot. Second, while definitely a big fan of IRacing – it is no substitute for the real thing – nothing compares to the sights, sounds and yes smells of the real thing. Last – it is much more difficult to learn than any console game and is brutally unforgiving (there is no “Arcade Mode”) and should not be compared to them. By lap 3 by yourself in a stock car/truck – you are generally spinning out.

I feel bad for whoever had to pretend to say “yes” to this absurd question.

I’m waiting for iNFL, iNHL and iMLB. Give sportswriters something to do.

Why can’t we have both? I love to be able to watch iRacing also

No problem with having them both. Just don’t act like anyone should give a shit about what happens in one of them.

NOOOOOOO!!! a fancy video game is no racing!

I’d guess that a $30,000 simulator is a lot cheaper than the real thing. It’s marketable and I bet that Bristol should be very interesting. But without the physical danger I think this stuff will just eventually become a crashfest and fizzle. Nice try! The broadcaster do s great job though.