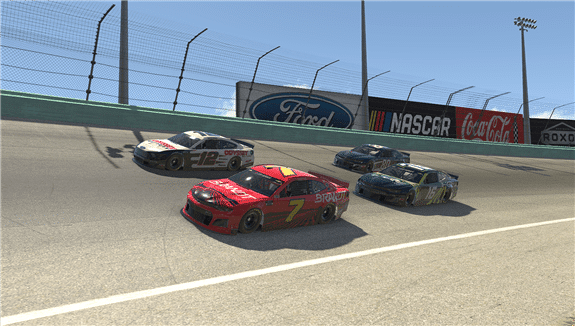 What else really needs to be said here?

So, just to recap the events of the past two weeks relating to NASCAR and the planned mid-March race weekend at Atlanta Motor Speedway:

-On Wednesday, March 11, NASCAR announced there would be fans in attendance at Atlanta Motor Speedway, even though the NBA had begun to move forward without fans. The sanctioning body established guidelines to separate media from drivers, with none of the guidelines separating drivers from hot pass-holding fans or crew members from either hot pass-holding fans or media.

-By Thursday afternoon, March Madness was basically dead in the water after multiple universities/conferences suspended athletic operations, it leaked that the NHL and MLB would be suspending their seasons, and that Miami-Dade County would not allow fans to attend the following weekend’s NASCAR races. NASCAR… announced the next two races would continue on without fans. Stricter guidelines severely limited media to the garage but failed to limit garage members from each other.

-Thursday night, teams began to pull into the Atlanta garage, and the industry at large traveled to the Peach State.

-Friday morning, NASCAR had no clue what it was doing. It was rumored it would run the triple-header weekend over the next two days and get out by Saturday evening.

-A little after this came out, this rumor was squashed by the new rumor that NASCAR was postponing the weekend, which eventually got announced. Everybody packed up and goes home, wasting money and potentially exposing them to the coronavirus in their travels.

-This week, NASCAR told teams a NASCAR employee that was in Atlanta had tested positive for COVID-19. This was without directly informing the media that was in attendance, because screw them, they’re not real people, apparently.

-The employee will be quarantined until March 27, which is just a few hours after this column will be submitted, bringing up the question of if NASCAR knew about this already and neglected to inform anybody until the week the quarantine ended. For a disease that can spread asymptomatically and can have a two-week incubation period.

Wow, that all looks way worse in timeline format. Imagine living through it.

All in all, how was NASCAR’s response to the COVID-19 pandemic?

Its handling of the virus has been an abject failure of crisis management. We are all incredibly lucky that its incompetence apparently did not lead to a mass outbreak in the garage or in the media center. For all of the good press NASCAR received for Ryan Newman being alive, that doesn’t excuse it whatsoever for one of the biggest safety failures in the history of the sport.

“But Mr. Writerperson, stop Monday morning quarterbacking with an opinion you only just made. It was a tough decision and they couldn’t just pull out due to money”.

I was going to write about this for Friday’s column but it has become very clear to me that it needs to be said now:

NASCAR needs to postpone this weekend’s races, at the very least.

Point two: I’ll grant that it would have been a tough decision the day I made that tweet. But by Wednesday, it was fairly obvious there shouldn’t be fans in attendance at Atlanta. By Thursday, it was obvious there shouldn’t be a race in Atlanta. March Madness is significantly bigger than the entire NASCAR season and keeps way more people busy with their job than the NASCAR industry does, and even the NCAA ended up canceling by Thursday afternoon.

Oh, and IndyCar. Trying to escape out the back door, eh? No, because IndyCar may have handled this situation even worse than NASCAR did.

Everyone who has access to the Grand Prix of St. Petersburg street circuit will be placed on these buses outside of Tropicana Field and shuttled to the track.#IndyCar pic.twitter.com/Hwwh6njjbJ

I hope that the first race NASCAR and IndyCar return, both sanctioning bodies’ executives go to the garage and the media center so that they can just take a stroll. Look at the people that they endangered with their decision making, and their unseen families. Playoff points, television money, doubleheader weekends, street courses, quality passes. Really essential things in the grand scheme of things, aren’t they? Hopefully, if god forbid we end up in a similar situation in the future, they can remember that when they make those decisions.

Was the fake video game outlaw race a success this past weekend?

The eNASCAR iRacing Pro Inventional Series had… a debut on Sunday.

It was a complete fiasco for the first 80 laps of the 100 lap race. Drivers spent their time running pace speed behind the pace car. Occasionally a restart would break up the pace laps, which would be followed by a wreck after at most a few laps.

Then, in no way related to going past the broadcast window, a race broke out in the last 20 laps. It was a fantastic finish, a classic tale of tire strategy that ended with Denny Hamlin prevailing on a last lap pass of Dale Earnhardt Jr., who held on in a three-wide photo finish with Timmy Hill and Chase Briscoe for second. The previous sentence is something you never thought you’d read on this website in 2020, yet here we are.

Now Fox Sports has announced it will continue to broadcast the series, beginning this weekend with a 125-lap race at virtual Texas Motor Speedway. The races definitely needed more laps, because distance-wise 100 laps is too short for a national TV broadcast. At the same time, I hope NASCAR reduces the number of resets each driver has from two to one, which would naturally reduce the number of cautions in the early portions of these races.

I also understand that this is a series for fun while we all wait for real racing to come back. However, why not put a little something on the line for these drivers? Maybe not a full-on championship, because it might be too late for that now.

Why not have the wins count towards the All-Star Race?

Doing that would mean nothing in the long term, but in the short term, that could be a lot of fun to watch, especially for drivers like Garrett Smithley or Hill or Ty Majeski. Chances are those guys aren’t going to have the equipment to actually get a NASCAR Cup Series win by the time the All-Star Race actually happens; why not give them a chance to get into the real-life exhibition race and get some real-world publicity? It would be huge for small teams like MBM Motorsports to get an automatic bid into that race, teams that are going to be struggling the longer this break lasts.

Who will improve on their results this week?

This is going to be a very interesting race this weekend. Last week, those paying attention kind of knew who the fast drivers were going to be on Sunday. This week, it seems more Cup drivers are taking this more seriously and have been practicing more in open sessions.

Kyle Busch and Jimmie Johnson had a fantastic battle for 31st throughout much of last week’s race. Which is another sentence you never thought you’d read on this website in 2020. It was fairly embarrassing for the defending Cup champion and the G.O.A.T., who really couldn’t do much except wreck.

This week has been a little different. Busch dominated a practice race on Wednesday night before finishing a respectable fourth.

The finish from tonight's eNASCAR Pro Invitational practice race. @GarrettSmithley over @tdhudson001 at the line, with @JebBurtonRacing 3rd and @KyleBusch 4th. Kyle led most of the race and is my pick for Sunday's race! pic.twitter.com/79Ghyt4wEJ

I feel like I was up all night learning how to use @iracing… oh wait, I was. Thanks a bunch @rayalfalla. https://t.co/fCQAB3RmBE

While I do think we’ll still be looking at the same cast of characters on Sunday as we were the week before, it also wouldn’t surprise me if Busch makes a huge leap. At the end of the day, he is Kyle Busch, and he is currently one of the best overall drivers in the world. Johnson was far off enough off the pace in both qualifying and the race on Sunday that I can’t imagine him really being able to break the 20s, but then again, we’re in a world where iRacing has replaced real world racing for now, so stranger things have happened.

I really don’t care either way about the media and Covid 19 is overblown. What we know is that NASCAR had a chance to be the only sport on television that weekend, and once again, blew yet another golden opportunity…end of story

It started in the White House.

Obvious to whom at that time? Much of America was still very much in the dark about this virus then, and many still aren’t sure what to make of it. At that time, outside events were ‘safer’ than indoor events like NBA & NCAA, so many thought it was ok. Our world is pretty good at panicking over things we don’t understand, and I’m not sure I find fault with NASCAR for wanting to get a better understanding of things before messing up tons of peoples weekends and relaxation time.

COVID-19 is a practice in uncharted territory for our world. Looking back, could or should things have been done differently? Sure- there is room to learn and grow in case, God forbid, something like this happen again- but i’m not sure attitudes like the one i find behind this article help too much.

I’m going to keep repeating this. 10s of thousands die of the flu in the USA every year. And we don’t care. We don’t get daily reports of who has it. We don’t get death counts. Swine flu back in 2009 was not the beginning middle and end of every news program. If we really cared, how come we don’t do social distancing all during flu season? Maybe it will save lives, even if only a few 100.
I would go to a movie now if I could. I was planning on going to the Richmond race.
I’m not pretending its not a problem, but shutting down the country and world will lead to other problems. Depression, suicide, etc. But its ok I suppose.

Repeat it all you want. This is nothing like the flu, even the Swine Flu and things are going to get very bad before they get better. Do yourself a favor and stop listening to that big POS Trump.

Bill B
Reply to  Bruce Smith

Maybe you need to pull your head out of Pelosi’s ass and quit bending over for Schumer.

Bruce Smith
Reply to  Bill B

Whatever. Then don’t take any of this seriously.

Nobody said it shouldn’t be taken seriously but there has to be a balance between minimizing the deaths from the disease versus shutting down everything to the point where people will lose everything. If you think the government can keep paying people indefinitely to stay home you are delusional. All Trump is doing is pointing out what a rational person would see as obvious. Besides, as far as I am concerned all we are doing is putting off the inevitable. Eventually everyone is going to be exposed to this virus well before a vaccine is in hand. Withy that in mind, we are going to end up with X people dead in the end. Would you rather have X dead with a depression or X dead with a functioning economy.

Gee, Matt, apparently you should be in charge of NASCAR–and all of racing–since you seem to know so much more about it than anyone else.