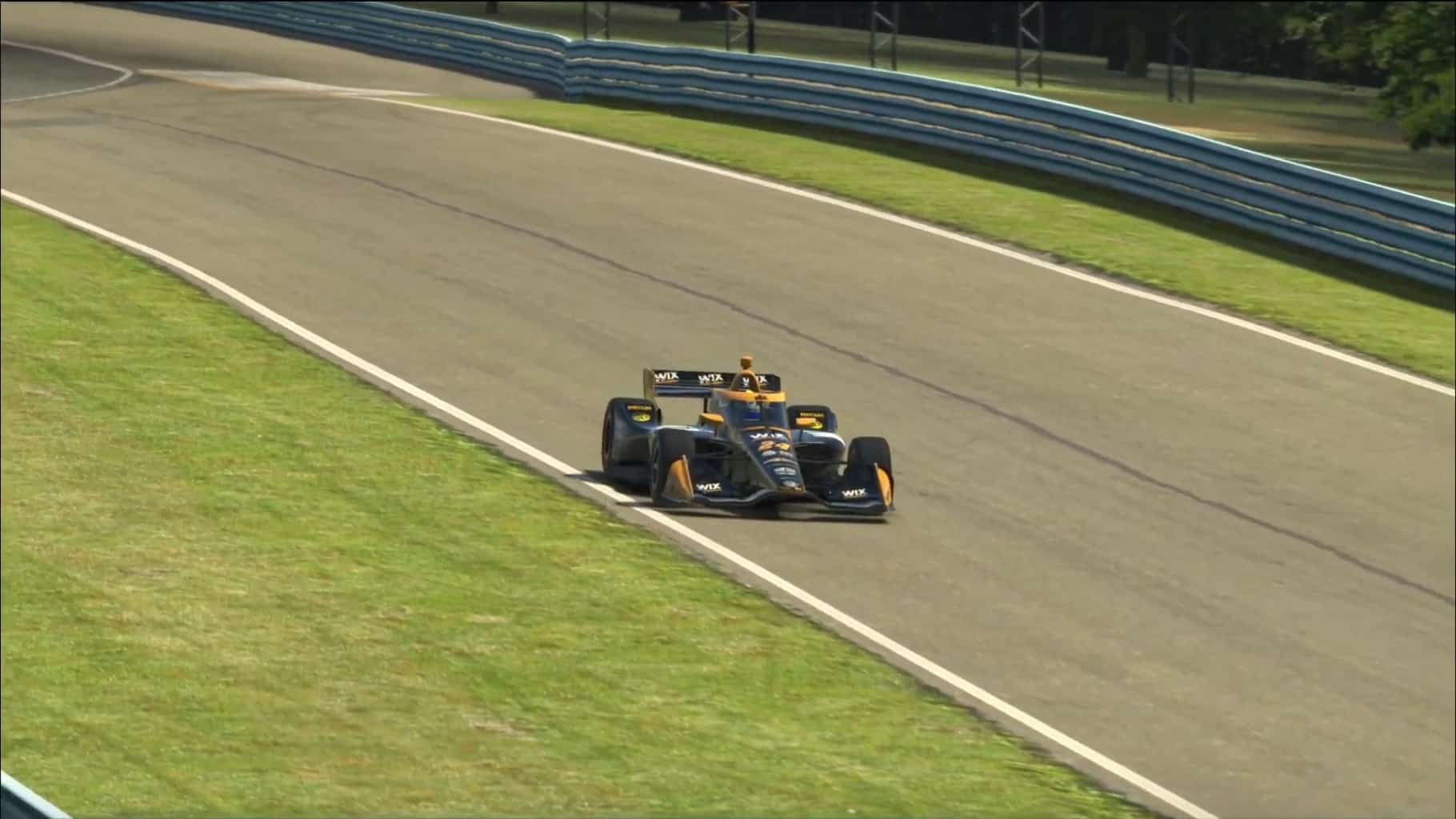 Sage Karam took the lead from the start and never looked back in the IndyCar iRacing Challenge’s series opener at Watkins Glen International.

The part-time Dreyer & Reinbold Racing driver started from the pole and only surrendered the lead to Team Penske driver Will Power during his two pit stops.

“It was nerve-wracking for sure there at the end,” Karam said during his post-race interview.

Karam avoided disaster late in the American Red Cross Grand Prix when Kyle Kirkwood, subbing for Ryan Hunter-Reay, spun in front of him coming out of turn 10.

“That was a little too close for comfort, definitely a code brown moment,” Karam said. “I didn’t know which way he was going to go, and he was starting to spin, so I had to quick rely on some instinct. I picked left and thankfully it was the right choice.

“It was a lot of fun; great that we can be able to give the fans something to watch.”

The 45-lap event had no cautions, as is often the case for this type of course on iRacing. However, that didn’t mean there weren’t any incidents.

On the very first lap, Alexander Rossi was turned around and collected other cars, including Marcus Ericsson’s. This put several drivers laps down after they made their repairs. Ericsson later posted on Twitter that he lost his internet connection after thunderstorms moved through the area.

Then on lap 6, Simon Pagenaud, Josef Newgarden, McLaughlin and Askew collided with each other in the bus stop.

Eight laps later, Pato O’Ward got loose and was turned by Kirkwood.

A single-car incident took out Scott Speed when he spun and tagged the wall on lap 23.

Another driver suffered the earliest possible exit: James Hinchcliffe had a glitch and his car never appeared in the event.

Just learning that my car never showed up in the game. Obviously a glitch on this side. Really sucks. Spent a lot of time getting ready for this!

Colton Herta, Tony Kanaan and Sebastien Bourdais also retired in the beginning laps. Bourdais was disqualified when he failed to make a pit stop for damage, he tweeted.

Robert Wickens had hoped to enter this week’s race as well, but his equipment didn’t arrive in time. He hopes to race next week at Barber Motorsports Park.