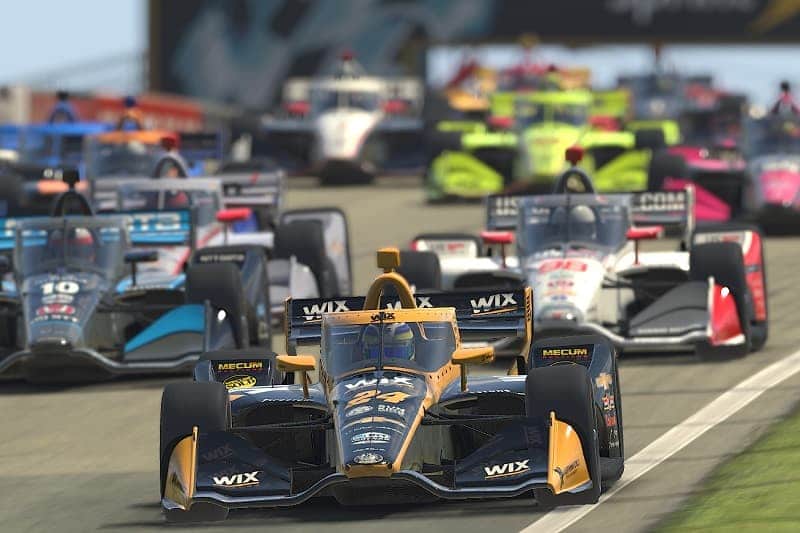 The IndyCar iRacing Challenge kicked off Saturday with the American Red Cross Grand Prix at the Glen, the first of a half-dozen virtual races meant to fill the void until the 2020 IndyCar season begins in May. The event was uncharted territory for fans, drivers and league personnel alike, and it succeeded in some ways while other aspects have room to be improved.

What can we learn from Sage Karam‘s dominating win at Watkins Glen? And what should fans reasonably expect in the rest of this event? Here are our takeaways from Round 1 of the IndyCar iRacing Challenge.

The technical production of the IndyCar iRacing Challenge debut was disappointing at best. Fans who wanted to watch practice or qualifying had to find individual drivers who happened to be streaming on Twitch (thank you, Scott McLaughlin and Conor Daly). Several drivers somehow didn’t even record qualifying lap times. And then once the race began, it was a bit of a mess.

James Hinchcliffe‘s car somehow never made it onto the server, leaving the fan favorite out of the race with no real explanation, and his absence wasn’t even addressed until very late in the broadcast. Why didn’t someone check before the green flag to make sure everyone was accounted for? Tony Kanaan was one of a few drivers who just up and disappeared in the middle of the event, and that issue wasn’t really touched upon either.

Some glitches were to be expected since this was a new format for everybody, but these were big issues that should have been fixable. In other esports there are procedures in place for these things, such as technical timeouts when a player drops off the server. Hopefully the next event will be better in running things smoothly and making sure that everyone has a real chance to compete.

And then there’s just a bit of wishful thinking – any chance we can get the drivers’ sound patched in the same way that we occasionally get to hear team audio during normal IndyCar broadcasts? The commentary on McLaughlin’s and Daly’s streams during practice was hilarious and would have made the race that much better, especially in the few awkward silences where the commentary team was clearly looking for something to say.

24th or whatever last was, to 10th! Haha we’ll take that for my first ever official @iRacing event. We lost a screw in the ikea kitchen table chair I was sitting on and the cardboard box supporting my pedals collapsed. But we had a clean race! ? @USAFRecruiting @ECRIndy pic.twitter.com/6HAul6ppUL

The other major lesson from the American Red Cross Grand Prix at the Glen was not to expect the same racing fans would get in person. Sim racing and real-world, open-wheel racing are two very different things, even with all of the technological advancements, and we saw that Saturday with some of IndyCar’s best drivers being in the back of the pack and some of the frontrunners being much less experienced.

Take Alexander Rossi, who is a contender in almost every IndyCar race and who will almost certainly be IndyCar champion at some point in his career. Through no fault of his own, the Andretti Autosport driver was involved in a first-lap wreck and was never really heard from again. Other big names like Kanaan and Sebastien Bourdais were also non-factors, and you can’t blame them because iRacing was new to a large portion of this field.

While it was great to see different names up front, one has to wonder if fans will lose interest if the drivers that we know and love continue to not be competitive. It’s not their fault at all as they try to learn this new technology on the fly, but the overall product should be much stronger once the usual suspects get used to it.

This @iRacing thing is fun! Looking forward to next week. We had a good start – running in 6th before I hit the wall, but only ended up 2 laps down & finished 14th. The important thing is we raised $2250 for #Turns4Troops and we’ll be back out there next week to raise some more. pic.twitter.com/9hKx72pnVV

Despite the glitches, props must be given to everyone involved with the IndyCar iRacing Challenge for their efforts to make this as much like a real race as possible. They could have simply thrown up a stream of the drivers racing, but it was nice to see and hear things that we would be accustomed to normally.

The NBC Sports broadcast team of Leigh Diffey, Townsend Bell and Paul Tracy had the call, and Indy 500 icon Jim Cornelison performed the Star-Spangled Banner before the drop of the green flag. Some of the ideas worked better than others (the virtual autograph session didn’t have quite the same effect), but this was a whole lot of extra time and effort from people around the country who all chipped in for that authenticity.

Now, what will it take for NBC Sports to broadcast the next races? If virtual NASCAR can make it onto cable, then certainly there should be a way to do the same for IndyCar.

The IndyCar iRacing Challenge continues April 4 at 4:00 p.m. ET with Barber Motorsports Park. If you missed Saturday’s race, you can stream it here.