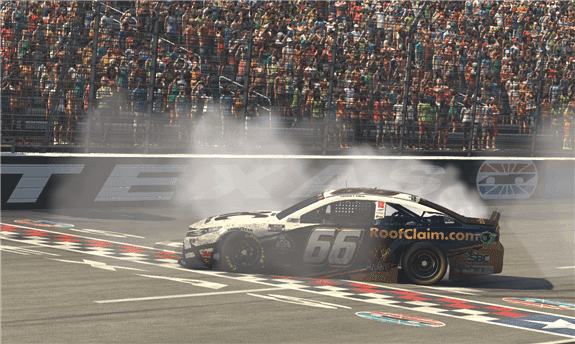 Timmy Hill held off a hard-charging Ryan Preece on the final lap to win Sunday’s O’Reilly Auto Parts 125 eNASCAR iRacing Pro Invitational Series event at the virtual Texas Motor Speedway, the series’ second such event in the wake of the coronavirus pandemic.

After an anthem courtesy of the Grateful Dead’s Bob Weir and a command via Football Hall of Famer and former NASCAR team owner Troy Aikman, polesitter Byron led the field to green for a race that was admittedly less chaotic than last week’s inaugural event at Homestead-Miami Speedway.

The first caution came on the heels of two separate incidents — the first, which didn’t bring out the yellow flag, was a violent crash on the backstretch involving Kyle Busch, Ryan Blaney and Chris Buescher. The second, which did bring out the caution, was for Christopher Bell and Michael McDowell. Bell was forced into the wall on the frontstretch and turned back down the track, collecting McDowell as they slid into the infield.

Not good. Not good at all. @CBellRacing goes for a ride and brings out our first caution at @TXMotorSpeedway. pic.twitter.com/qG3ATG7Ngf

Byron only gave up the lead to Nemechek for a short time, getting it back after winning the race off pit road under the first caution.

Another yellow would soon follow as Anthony Alfredo was turned head-on into the outside wall and hit hard by another car.

Denny Hamlin — last week’s winner — inherited the lead after staying out under caution, but Byron pushed real-life teammate Chase Elliott past the No. 11 for the lead on lap 45. That didn’t last long, though, after Preece rocketed to the front and got the lead.

Nemechek got by Preece to retake the lead and was out front at halfway, but would lose it as the field began its final cycle of green-flag stops. That opened the door for Earnhardt Jr., who had hit the wall just past the halfway point, to take the lead. His No. 8 seemed to run out of gas with just under 20 laps remaining, though, and he was forced to pit.

Another caution flew with 16 laps to go for Daniel Suarez, who spun by himself down the backstretch, and another waved for a Clint Bowyer spin with 10 laps remaining.

After Byron led the field to the green flag with five laps to go, he was moved a lap later by Hill, who nudged Byron out of the groove and dropped him outside the top five. Smithley followed Hill past Byron, inheriting second, when another caution flew.

.@WilliamByron was in the lead, but @TimmyHillRacer was coming through!

Preece and Parker Kligerman made contact coming out of turn four, sending Preece on a wild ride through the infield grass. Preece saved his car, being ruled third for the next restart, but other cars (including Byron) spun through the grass on the frontstretch.

This caution changes everything!

Hill led the field back to green for a green-white-checkered overtime sprint to the finish, and was able to hold off Smithley, Preece and Cassill on the final lap. Preece had several good looks at passing, and even got to the inside of Hill off the final corner, but Hill’s No. 66 held him off to win the second eNASCAR Pro Invitational Series event on iRacing.

“How about that?” Hill said in his post-race interview. “That was exciting! I can’t believe it, that was such a fun race there … glad to pull the victory off for [sponsor] RoofClaim, MBM Motorsports and everybody back home.”

“It means so much,” he added as he did victory donuts at the start/finish line. “I’ve got a tremendous amount of fans and family and friends reaching out to me.

“To finally capitalize on that, it’s a tremendous feeling … really neat to get this and hopefully we can pull some wins off when we come back racing in the real world.”

FOX Sports confirmed the next event will be this coming Sunday, April 5 at the virtual Bristol Motor Speedway, marking the third Pro Invitational Series event.