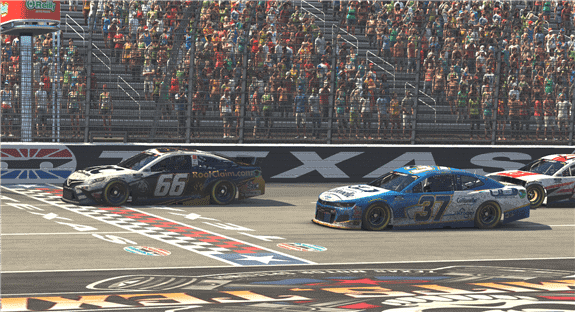 Yes, Dale Jr. was in the mix again, leading 14 laps and finishing sixth, and Hendrick Motorsports driver William Byron (who also has logged plenty of iRacing hours) looked like the man to beat for big chunks of the O’Reilly Auto Parts 125. But after Timmy Hill nudged Byron out of the lead and a subsequent incident led to a green-white-checkered overtime finish, Hill claimed victory and led a top five that included Ryan Preece, Garrett Smithley and Landon Cassill.

These aren’t household names to anyone who doesn’t follow NASCAR closely. But given their experience in iRacing and the fact that the computer simulation of stock car racing levels the playing field for all competitors, they’re names everyone will likely get to know as long as real world racing remains sidelined due to the coronavirus pandemic.

It’s a completely different experience for someone like Hill, who has just just seven top-10 results across NACAR’s top three national series and currently drives for underfunded MBM Motorsports in the Cup and Xfinity Series. As such, he simply doesn’t have the resources to run up front or challenge for wins on a regular basis — but he does right now while the sport has gone virtual.

“For me personally, the iRacing platform is kind of an equalizer in the fact that I’m in the same cars as everybody,” Hill said in the post-race winner’s conference call, itself a new situation for the 27-year-old from Maryland. “Most weekends I’m not in that situation. I’m in a situation where I’m racing on 15-lap tires, and I’ve got a motor that’s 50 to 100 horsepower down, and I’ve got a car that’s probably five years old. So I’m really behind the eight-ball as soon as we show up at the racetrack a lot of times. So to come into the service where everybody has the same cars and in this case even the same setups, so everybody’s on the same exact playing field, basically the driver conquers all in this situation.

“For me to actually beat these guys on a level playing field, it really feels good for my driving talents, and I look forward to the competition as it gets better in the coming weeks.”

That last thought is something that has to be running through the minds of many of the NASCAR Cup Series heavyweights who simply haven’t put in the hours on iRacing to date. It’s simply a little jarring to see the likes of Kyle Busch, master of just about every kind of stock car he’s driven, running around in the mid-pack as he gets accustomed to sim racing.

Certainly, if NASCAR can’t start back up again on the targeted Martinsville weekend in May and the Pro Invitational Series continues on, Rowdy and others will adjust. Yet even once they do, they’ll still have to contend with Hill and others who are usually at a disadvantage and are now effectively equals.

What happens when the world gets to see the talent that drivers held back by substandard equipment on full display? It could mean more real world opportunities, though Hill isn’t thinking about that too much right now.

“For me, I haven’t contacted anybody yet,” Hill said. “I hope that maybe from this, some people would open their eyes to some of the guys toward the back of the garage. Several guys who don’t really get a lot of coverage because of the equipment that they’re in, you just don’t hear their names. And for me personally, I’ve been in this sport for 10 years and don’t really get talked about much, but I feel that I can get the job done given the opportunity. I’m trying to showcase that as many times as I can.”

At least for the time being, Hill will get to keep showcasing himself, as will the likes of Smithley, Cassell, Ty Majeski and others. Those names will continue to become more familiar to everyone watching eNASCAR at home, and they just might linger a bit longer in the minds of owners when engines rev back to life in the real world too.