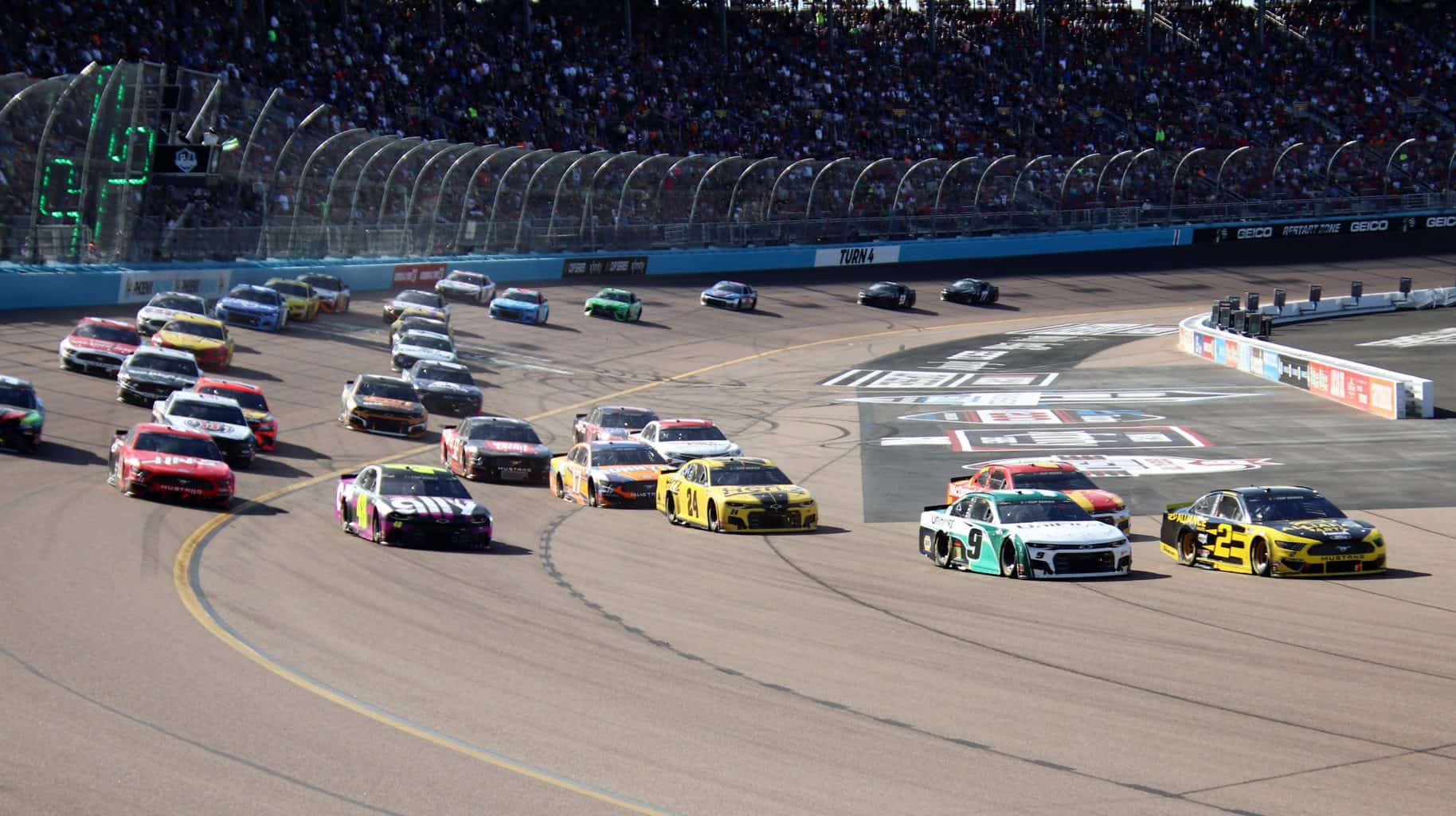 It’s been a struggle to commentate the past few weeks, and not just because there is no racing taking place to commentate on. Since a 2010 season that saw me on the road 35 weekends covering anything and everything I could for Frontstretch, I’ve often found that I do my best thinking on the road. Plotting storylines and making observations en route to the track, or connecting the dots on the long treks home, there’s nothing better than a road trip to inspire writing. Maybe that’s why I’ve spent far more time mapping out a return to Route 66 during my quarantine than watching anything related to NASCAR; the promise of a road trip is needed when my current excursions are nothing more than 15-20 minute sprints to keep the batteries charged in the family fleet.

However, as much as I wax romantic about the chance to hit the open road again, the reality is the collective world of most race fans in this country has likely shrunk for the foreseeable future. With travel restrictions proliferating from the Northeast to the Great North State, discretionary income disappearing for race fans of all types and colors and most doctors noting that COVID is likely to jump from region to region for the foreseeable future, following the great traveling circus that is NASCAR’s big three is likely to be hard if not impossible as NASCAR contemplates restarting its tours with or without fans.

.@NASCAR has been considering the option of potentially running with no fans in the stands when the sport returns to racing May 9th at Martinsville, if necessary, per people familiar.

➖ Some teams/drivers say they would be open to that if that's what it takes to get re-started. pic.twitter.com/JazeuPQh9b

Given the surprising level of enthusiasm race fans showed a week ago for the first iRacing broadcast on FOX Sports, it was surprising (but completely understandable) to me to see a cascade of negativity hit Stern’s report for this idea, as fans wanted to be at the track. Granted, NASCAR’s hopes to start fan-free racing on the same May weekend that was to see Martinsville’s first major-league night race in its 70-year history is about as poorly timed as it could be, but the reaction seen here speaks volumes to how much the in-person race experience remains every bit as important as seeing the celebrities of NASCAR race.

What seems to be getting lost in the shuffle here, both in the eyes of race fans as well as those covering the sport, is that there is a world of racing beyond NASCAR’s big three that is going to prove crucial in getting racing, both among competitors and fans, back to normal. The reality is, with limitations on income, travel and likely the very law enforcement and medical resources required to host massive Cup Series events, local short tracks are going to have to be the backbone that the sport at large leans on to get back to green. There is opportunity for the racing community here if they can focus on something other than literally watching celebrity drivers play video games in their underwear. Sadly, that’s not hyperbole.

With travel and money to be at a premium, it’s going to be local racing or bust for many involved in the sport should racing resume at some point in 2020. If there was ever a chance to break up the de facto NASCAR monopoly that has seen every single facet of major short track racing, from the World Series of Asphalt to the Chili Bowl, being defined more and more by the participation of major-league NASCAR drivers, that opportunity is now. Captive audiences are a powerful thing to have.

If the response to Adam Stern’s report on fan-free racing is any indication, the appetite for racing once the stands open again is going to be voracious. And for local tracks where a night’s ticket goes for $15 instead of $50, for tracks that are 15 miles away from home instead of 50, this will be the time to get aggressive and experiment. Go crazy with race formats and car classes. Integrate community events. Encourage bounties and bonuses. The chance for old-school promotion to sell itself as the hometown game is about as strong as it will ever be.

Yet such type of talk and planning is being seen only in the video game realm. Writers are lobbying for iRaces to get longer. The former short track authority that was Speed51 looks like an eSports page, with the front page this weekend requiring multiple scrolls to find pics of a real racecar. The addition of ghost tracks to the iRacing circuit is being treated like real news.

Fans on #nascar Twitter always be asking "When is North Wilkesboro coming back?!??!?"@dustinlong has the answer: June!https://t.co/bv625aCyLU

And rather than finding a place to race, drivers (rightfully or not) are lamenting the races they’re not invited into.

This invitational is GREAT. I emailed them twice to be in it, but haven’t been invited yet. I’m sure it’s hard. They’ll get it worked out but yeah it feels bad to not get invited when you’ve been in Trucks/Xfinity for 6 years. Still watching, still supporting @iRacing & @NASCAR. https://t.co/8MIxcMq7w9

For all the respect I have for Martins and teams like his trying to play in the big leagues, these Tweets remind of me of a Star Wars fan trying to justify buying a second ticket to The Rise of Skywalker despite being fully aware of the crap that Disney has been churning out since they bought Lucasfilm. The attitude of having to make it work in NASCAR, rather than racing somewhere else, is exactly what allows their de facto monopoly to continue.

This isn’t meant to be a manifesto against the big bad wolf in stock car racing. There’s a reason they’re the biggest game in town. The Coca-Cola 600 was the first race I ever saw live and remains a patriotic spectacle to behold. The Southern 500 still fills me with pride every time I make it down to Darlington, both in terms of the race’s traditions, the down-home fans that jam the stands and the sheer driving talent required to run 500 miles on the Lady in Black. And as for the Daytona 500, it’s for me the Grand Canyon of motorsports; completely commercialized, known by all and overhyped by all that sell it, only to completely live up to every form of the hype on arrival.

But monopoly is a bad thing. A lack of competition is a bad thing. And for NASCAR, a sanctioning body which has outlived its original purpose, to legitimize a sport filled of Billy Joes and Bobbie Sues taking the purse and running out of Dodge, the lack of a true competitor has left the sport it dominates in what could be considered stagnation for years.

However, in this new world, they’re on the same level as every other form of motorsports… closed indefinitely. But this is no red flag period. There’s no reason for every other track owner, promoter, and racer out there to be working out a plan to survive, and emerge, when the green comes back out.

Here’s hoping that’s what’s going on outside of Twitter.

Interesting thoughts about short tracks being ‘the road to recovery’ for racing addicts. I know that Central PA ran sprint cars for a couple of weeks before they were ‘asked’ to close in support of the no-gatherings-greater-than-50 requirement. They drew pretty well. Getting Cup races and Indy Car races back on Sundays or mid-week is vital to developing a new fan base at short tracks.
There is also no reason why tracks with two races can’t differentiate their events like Charlotte has done. How about twin 200’s at Martinsville with best combined finish getting top points and money. Or running a shorter and a longer race like Darlington and others used to do (Rebel 250 and the Southern 500).
TV is steering this ship at the moment, so they will drive the requirements to Nascar. Part of the penalty for being dependent on them… Good article about racing for a time with no racing. Thx

FYI, TV has been steering the ship since the 2001 contract, maybe even longer.