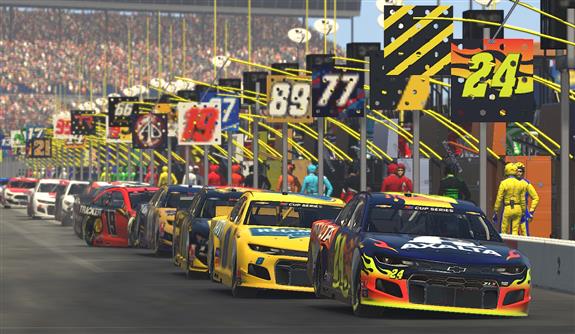 While the racing world anxiously looks forward to a time when NASCAR, IndyCar and other series return to tracks everywhere, fans are slowly growing accustomed to the next best thing: iRacing. The incredibly realistic computer sim has been a source of entertainment and discussion over the past few weeks, helping to fill some of the huge void left by tracks remaining empty and silent due to the coronavirus outbreak.

Though sim racing isn’t for everyone, enough racing fans have taken to it — many experiencing it for the first time — as the stars of NASCAR and IndyCar have temporarily traded their cars for rigs. There have been fun stories aplenty, particularly with real world underdog (but iRacing ace) Timmy Hill claiming victory in the eNASCAR iRacing Pro Invitational Series race at Texas, and part-timer Sage Karam claiming victory in the first IndyCar iRacing Challenge event at a virtual Watkins Glen.

Both series return this weekend, and the pros of the eNASCAR Coca-Cola iRacing Series are in action as well. To keep track of where and when to tune in, we’ve rounded up all the dates, times and outlets for this week.

The Coca-Cola iRacing Series hits a short track for the first time in 2020, with plenty of parity so far. The first three races of 2020 have seen three different winners, none of whom are points leader Bobby Zalenski.

Making this race especially interesting is the fact that the series hasn’t run at Bristol since 2011, so while there are drivers in the field who have run it at this level before, it’s been quite a while. The racing has been tight already this season and could be even tighter on Tuesday night.

Where to Watch: eNASCAR.com, and on the iRacing Twitch, YouTube and Facebook channels; broadcast starts at 9:00 p.m. with the green flag shortly thereafter.

Things didn’t go all that smoothly for some of the top IndyCar stars at Watkins Glen, but that was to be expected in the inaugural race of the IndyCar iRacing Challenge. Considering how much better the entire event improved from week to week in NASCAR, it should be much the same for the open-wheel racers as they adapt to their temporary virtual racing reality.

The series has a few interesting wrinkles coming up, including a drivers’ choice week and a fantasy track that doesn’t even exist in the real world, but before that is Barber Motorsports Park, which would have hosted the real life race this weekend.

Where to Watch: INDYCAR.com, as well as the IndyCar YouTube and Facebook pages plus the iRacing Twitch channel.

Through two Pro Invitational Series races, we’ve seen both a Goliath (Denny Hamlin) and a David (Hill) claim race wins. That makes it hard to predict what will happen at the Last Great Colosseum, especially when it’s the first time some of the NASCAR drivers have tested their sim racing mettle on a short track.

What’s more clear is that the team at FOX has settled in and grown more comfortable calling the iRacing action, to the point that if you had wandered by a TV this past weekend, you might have been fooled for a minute into thinking it was a real race at Texas. And of course that, plus seeing past greats like Dale Earnhardt Jr. and Bobby Labonte mix it up with current stars and sim racing veterans, is part of the fun.

Where to Watch: FS1 and Fox Sports GO nationwide, plus FOX in some markets.