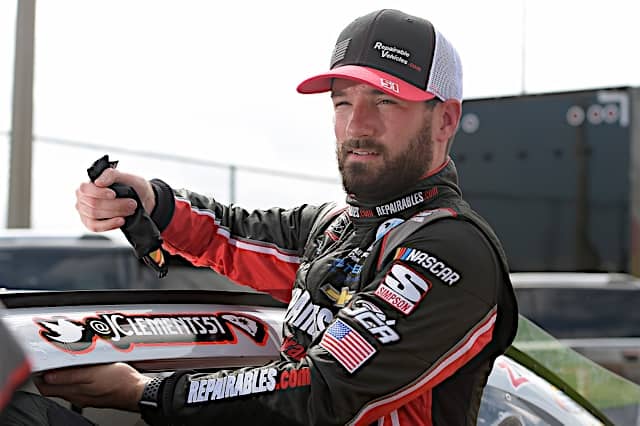 Most NASCAR shops sit silent this Wednesday (April 1), locked under the stay-at-home order of North Carolina Governor Roy Cooper. Preparing race cars is certainly nonessential within a state straining from the weight of the coronavirus epidemic.

But while most of NASCAR is based around Charlotte, there’s at least one team able to turn wrenches in their small race shop sitting down in Spartanburg, S.C. Underdog independent Jeremy Clements hopes the advantage helps turn a disappointing 2020 NASCAR Xfinity Series season around.

According to Clements, his team — four full-time employees deep — is still facing the battle of making an income without racing due to COVID-19. But, in a state without such limited restrictions, at least all of them can still come to work.

Problem is, the trickle-down effect of a faltering economy still hits the No. 51 team hard. And with stay-at-home orders popping up all over the country (in Virginia, such restrictions extend through June 10, putting NASCAR’s May 9 return at Martinsville Speedway in doubt) it’s still hard to focus on building cars.

“If others team can’t work, we shouldn’t be able to work either, to be fair,” Clements told Frontstretch. “On the flip side of that, we’re just doing random, little stuff now: cleaning the shop, organizing, I don’t know how much racecar stuff is being done at the moment. We’re getting cars ready slowly, and we really don’t know what cars to get ready, because I don’t know when we’re going to race again.”

Still, his small group presses on, eager to rebound after two DNFs in four starts. Clements sits just 25th in the Xfinity standings, a rather large deficit just four races into the season.

It’s just hard to plan for recovery when the coronavirus curve has yet to reach its peak.

“There are some things we want to do that we can’t do, so that puts us behind, but you’ve got to make the best out of the circumstances,” Clements said. “The engine shop [Clements Racing Engines] is still going, they’re still working too. I don’t know the exact number, there’s probably 18 employees in there. The problem with that is a lot of the places that you get your pistons, different things, they’re shut down. It’s just affecting everything everywhere, unfortunately.”

Clements adds that money not coming through the doors “sucks,” as NASCAR is following the CDC (Center for Disease Control and Prevention) guidelines and missing eight weeks of action. But he knows it’s for the greater good of keeping the racing community safe.

From a financial standpoint, Clements acknowledges the team is going to struggle for a bit. JCR works with roughly $350,000 of sponsorship per season. However, not all of that is readily available or being paid out when cars sit idle in his South Carolina garage.

“Money not coming in sucks,” Clements said. “There’s no money coming in, and you’re still paying your employees, that part kind of hurts. I’m sure everybody is in the same situation.

“We really race off the purse, that’s what really keeps us alive. We get some funding from Repairable Vehicles, All South Electric and BRT Extrusions. But the money we race off of, there’s no money coming in. It’s what you saved up to build racecars and buy better parts, stuff like that, you’re using that now to pay your employees. It’s like, ‘Eh, how long can we do this for?’”

Clements doesn’t know the answer to that question, adding it’s “kind of scary.” However, unlike other small teams in Xfinity, he hasn’t had to lay off any of his employees and vows this hiatus — however long it lasts — won’t shut the team down.

As of Tuesday evening (March 31), 24 states in the United States had more cases of COVID-19 than Clements’ home state of South Carolina. His team’s location may turn out to be key after Cooper’s North Carolina order caused all nonessential businesses to shut down for 30 days starting Monday evening. Working at race shops classifies as nonessential, signaling lay offs from many teams, including several big-budgeted organizations, though some shops have been closed for weeks.

It may be days, even weeks before South Carolina issues a statewide stay-at-home order. Should it happen, Clements would then have to close his shop temporarily.

The next scheduled Xfinity race is May 23 at Charlotte Motor Speedway, though that date could change based on protocol from the CDC and WHO (World Health Organization).

With more time being spent at home over the past month, Clements has found a silver lining. He’s getting more involved with activities around the house, playing with his Brussels Griffon dog Molly and helping wife Courtney with projects.

“I help my wife a lot – she’s a fashion blogger, so she puts me to work taking pictures, which I don’t really enjoy,” he said with a chuckle. “I’ve watched a lot of Netflix, played some Xbox. I’ve been doing some stuff around the house: cleaning things, organizing things that you’re like, ‘I’ll never do that,’ and now you’re like, ‘Oh boy, I’ve got a lot of time, I might as well do this.’”

Clements is also a big fan of the Tiger King, a popular Netflix original, finishing the seven-episode series in a 24-hour period. With the rough beginning of the season and the pandemic crisis having caused havoc on many race teams, Clements is trying to keep a positive mentality, shedding some light to race fans.

“Just know that this is just a temporary ordeal,” he said. “We’re all going to get through it and be back to normal, and everything will be good.

“You’ve just got to keep that mindset. We’re definitely going through a storm right now, but there is sunshine on the other side of it.”

Online therapy services, like www.betterhelp.com, are providing insight and advice on how to adjust to working from home and how to manage anxiety from COVID-19. Check out their website today to learn more.