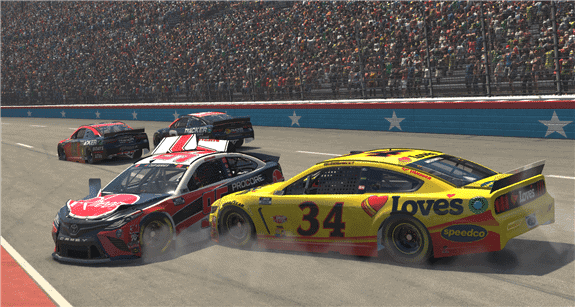 Maybe the best part of this unusual time when virtual racing is the only game in town is that on-track accidents are virtual too. When cars collide in iRacing, it doesn’t mean tangles of twisted metal with hard work and money down the tubes. More importantly, the racers are in no danger.

That doesn’t mean, though, that no one gets upset.

“Even though this is iRacing, it is virtual, the feelings are real,” Timmy Hill said after winning the eNASCAR iRacing Pro Invitational Series event at Virtual Texas Motor Speedway.

Hill would know. To pull off his Pro Invitational Series victory, he put the bumper to William Byron to make his winning pass. It was the kind of moment that could have led to a heated post-race discussion on pit road at a physical racetrack, possibly with more than words being exchanged.

.@WilliamByron was in the lead, but @TimmyHillRacer was coming through!

So what exactly is different when that happens in a sim race? Not much, according to Hill.

“I think the etiquette is the same as real life: basically you race people how they race you,” he said before pointing out that he and Byron don’t get a chance to do that often due to the wide gap between their equipment in the NASCAR Cup Series. “Going forward, I’m sure William isn’t happy about it. I’m sure he’ll do the same back to me. Reverting back to what I said before, you race others how they race you. I’ll probably get a lot of abuse going forward. I’ll have to accept that.”

But that’s to be expected. If Byron finds himself in a position to repay the favor over the next few weeks, that only seems fair.

A bigger question would be if there’s a sim racing dust-up that leaves someone steaming so much that they’d still be looking for a specific car number when real engines roar back to life later this year (and please let it be this year). Before you say that’s impossible, please consider that Daniel Suarez felt so wronged during the Texas race that his apparent quest for revenge, unsuccessful as it was, left him parked. (Sim parked?)

With more Cup stars joining in and plenty of eyes on the iRacing Pro Invitational Series, racers are going to be taking it more seriously. That said, Bubba Wallace believes everyone will keep it in the proper perspective.

“At the end of the day, I hope the next time we interact with somebody in real life, that’s not going to carry over,” Wallace said during a midweek conference call. “It would be like, ‘Hey man, you wrecked me on iRacing.’ But it’s like, ‘Cool bro, you had a reset button. Did you get hurt? Did it cost you any money?’ No, so at the end of the day, it’s a video game and there’s no blood, sweat or tears.”

I-racing… I’d be the guy who, at the drop of the green flag, spun around and ran the 1st lap in the opposite direction until I plowed into the oncoming field on the backstretch!

Like Bubba said, nobody is out anything. Hit the reset button. No risk, no reward, why bother?