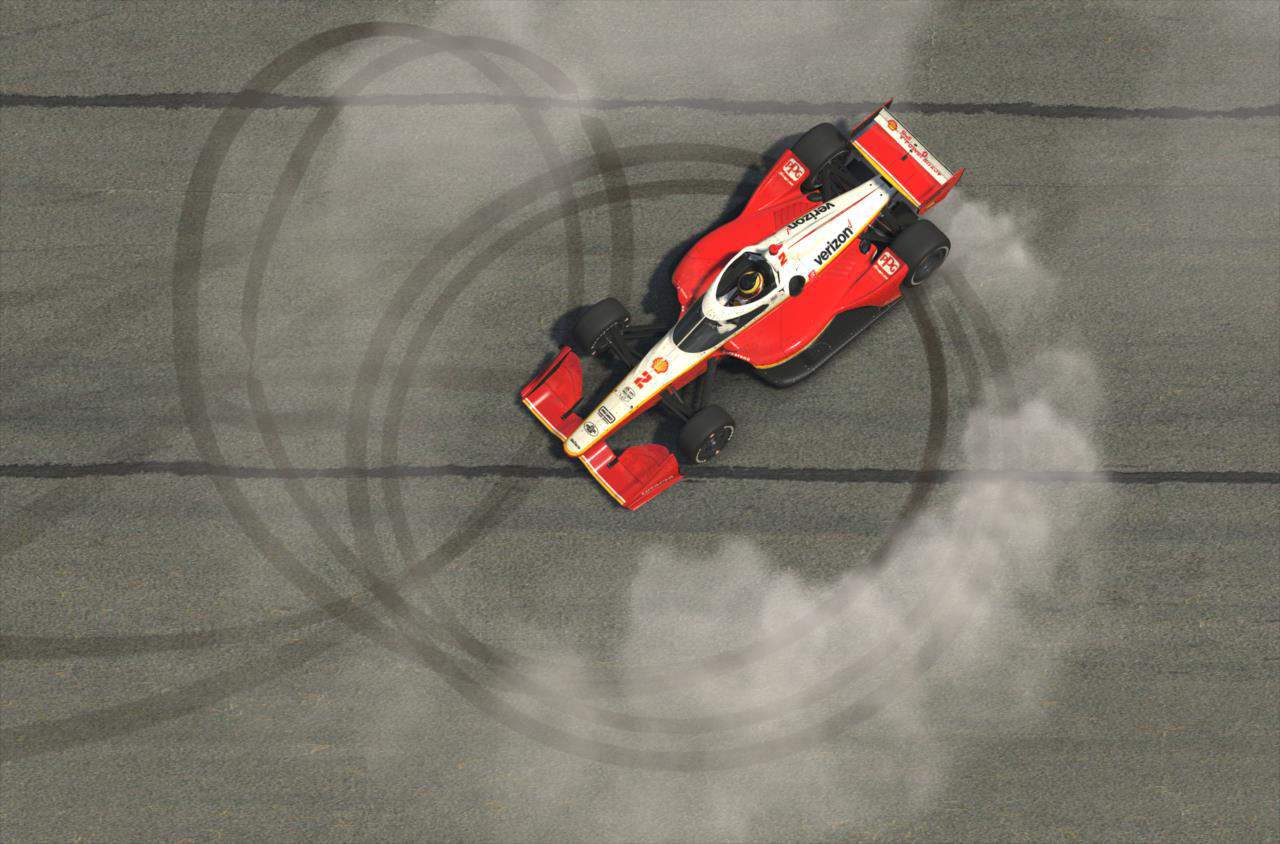 It was a wild second round of the INDYCAR iRacing Challenge at virtual Barber Motorsports Park. But when the dust settled,  Scott McLaughlin came out on top in the Honda Indy Grand Prix of Alabama presented by AmFirst.

McLaughlin began the race in eighth place but held a different pit stop strategy than the rest of the leaders. While many frontrunners took their pit stops around lap 26, McLaughlin took his on lap 14, just before the competition caution. He meticulously made his way through traffic and into the top 10, eventually charging up to fourth behind Sage Karam, Felix Rosenqvist and Scott Speed. He wouldn’t make his final pit stop until lap 32.

Polewinner Karam, meanwhile, was feeling strong and in a familiar position as last week’s winner at virtual Watkins Glen International. He pitted around lap 25 and Rosenqvist obtained the lead before pitting the next lap.

However, Rosenqvist on cold tires wheel-hopped over a curb and spun right in front of Karam.

Karam then had to return to pit road and make one of his two quick repairs available. Unfortunately, while trying to get back near the front of the field, he had another incident with Santino Ferrucci. Karam later sped on pit road, putting him out of contention for good. Then, this flip into the virtual guardrail happened, adding insult to injury.

After a dominating performance last week, Karam ended the race in 27th place.

That left McLaughlin in the driver’s seat, utilizing the right pit strategy needed to take the victory. The Australian Supercars champion was in third after he made his second pit stop, then moved up from there as the field shuffled out.

Speed, meanwhile, was up front for a short time but ended up running out of fuel. McLaughlin passed him for the lead and then never looked back, holding on to win ahead of fellow Australian Will Power. Speed was third, Alex Palou was fourth and Simon Pagenaud rounded out the top-five finishers.

After his run-in with Karam, Rosenqvist rallied back to sixth place. Colton Herta was seventh.

Robert Wickens, who was in his first race since a Pocono Raceway crash in August 2018, was running second with some wing damage when he got into the gravel trap with 12 laps remaining. Wickens wound up eighth.

Josef Newgarden was ninth while Ferrucci rounded out the top 10. NASCAR Cup Series regular Jimmie Johnson was 12th after suffering damage early in the race.

Wickens said in his post-race interview with NBCSN that his return to racing was “exactly how I imagined it.” He said he saved a lot of fuel after the competition caution, too, in his INDYCAR iRacing debut. Wickens, who just got set up for this race, didn’t get a chance to try Max Papis’ specialized steering wheel, designed for his recovery, but he can’t wait to try it next week.

The race was relatively clean but a late accident occurred when Oliver Askew and Pato O’Ward tangled up. O’Ward ended up in 24th place.

Netcode issues continued this week for Tony Kanaan, as AJ Foyt Racing posted on Twitter that he was stuck in his pit box and was unsure why. The team later said the system glitch resulted in a 26th-place finish.

The third round of the INDYCAR iRacing Challenge will be at Michigan International Speedway next Saturday, April 11.